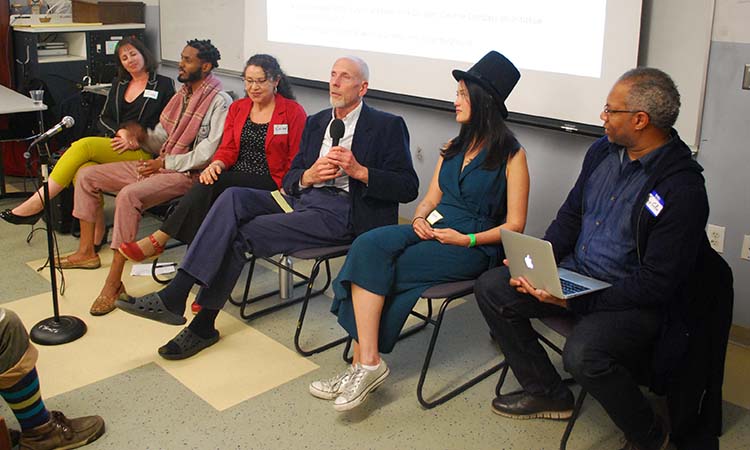 On Wednesday April 10, 2019 over 120 people gathered at San Francisco State University (SFSU) to discuss today’s loneliness epidemic and how community action can help reduce it.

Shareable’s executive director, Neal Gorenflo, kicked off the evening by explaining why this is a critically important topic. “We wanted to tackle loneliness because it’s now an epidemic in the U.S. and in other developed countries like the U.K., Japan, South Korea,” Gorenflo said in his opening remarks. “Today, the average American has only one confidant,” he continued. “That’s down from three in 1985.”

For the last month, Shareable has been publishing a series on social isolation. We’ve outlined the problem, not only in America but also in South Korea, the United Kingdom, and Japan; we’ve explored possible solutions such as those offered by Citizen University, or the Ying app; we’ve also offered different points of view on how we can ease the problem of social isolation with op-ed pieces by Monée Fields-White and Marvin Brown.

This is an issue that needs to be addressed. “Loneliness doesn’t just create a collection of sick individuals,” Gorenflo said. “It also creates a sick society. It weakens our social fabric.” The goal of this event was to catalyze action. “Tonight is about what each of us can do to solve [loneliness] in our communities,” said Gorenflo.

Gorenflo’s short introduction was followed by a panel discussion moderated by event co-host Kenn Burrows of SFSU’s Holistic Health Institute. Burrows kicked off the panel by stating that governments and corporations are not solving critical social problems like loneliness. He followed this by asking each panelists what brought them to the topic.

Perissinotto has been researching social isolation and loneliness among older adults. She explores how seniors stay independent and what drives themt nursing homes. “Once you start doing clinical work,” she said, “the things that are described as social problems, leave the realm of physicians. And that was deeply troubling to me. So I dove into some research.”

Chavez spoke about community-based research and it’s advantages over theory. Her research  examines the root causes of a sick society. “This global phenomenon of loneliness and social isolation completely makes sense in a fast-food nation,” she said. “We have created a belief system that people are disposable. Literally, you can delete and swipe and change and shift and move and live in this technological world without really exchanging anything related to the heart.”

“Technology is [like] a knife,” Mahgoub added. “You can use it to cut an avocado or a finger, it’s all about how you use it. What are the underlying values of our culture that are driving us?” he asked. “And how can we base our cultures on values that make belonging and maybe even a sense of purpose right at the center of our culture?”

The panelists discussed how you know you belong, what loneliness looks like, and how understanding our values is critical to how we fit into society. Please watch the full introduction and panel.

After the panel, participants broke into small groups to discuss various facets of the topic in more detail. Chavez lead a group on  the sound of loneliness, Adam Poswolsky hosted a session on Friendship in the Digital Age, and Katrina Zavalney explored reducing social isolation through chance encounters and neighborhood engagement, to name a few.

At the end of the evening, the entire group gathered one last time for a wrap up. Gorenflo invited participants to share what they learned in the breakout sessions. He also asked participants if they were considering actions to reduce loneliness in their lives and communities. Some people mentioned projects they wanted to start such as an “Everybody Wednesday” potluck and open mic event, a soup and story night, and a revival of Messy. Shareable plans to stay in touch with participants to see what actions they take as the main purpose of Shareable’s 2019 event series is to catalyze action.