Q&A: Steve King on loneliness, the social side of coworking and the future of work - Shareable
Skip to content 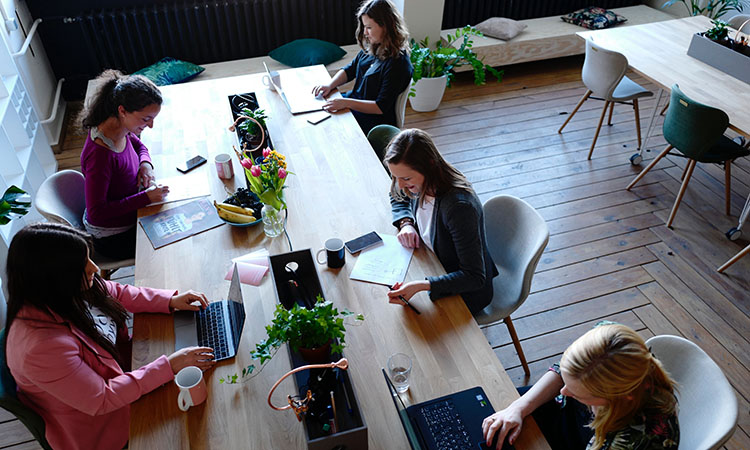 Freelancing, telecommuting, and job hopping are on the rise, and with these big shifts in work arrangements we’re seeing an increase in loneliness. Could coworking be part of the cure?

As research begins to show that shared workspaces can play a role in building social connections and reducing isolation, corporations are increasingly coming around to the view that coworking is a mental wellness issue, says Steve King, a partner at small-business research consultancy Emergent Research.

His 2017 Harvard Business Review article “Coworking Is Not About Workspace — It’s About Feeling Less Lonely” highlighted the importance of social ties in coworking spaces and noted that the top three words used by members to describe coworking were community, fun and social. “By creating community and reducing isolation and loneliness,” he wrote, “coworking benefits both organizations and workers due to greater levels of work engagement, productivity, and worker happiness.”

Coworking spaces reduce social isolation and loneliness, according to a survey by  Emergent Research and the Global Coworking Unconference Conference (GCUC), with 87% of respondents reporting that they meet other members for social reasons. Another 83% report being less lonely and 89% report being happier since joining a coworking space.

A rising number of companies in the coworking industry are responding to this demand by building social events into their business plans, King told Shareable. And wellness concerns have prompted more corporations to cover the cost of coworking spaces for remote employees, he said.

We spoke with King about the emergence of workplace wellness as a hot topic for remote workers in the corporate world and beyond, and the challenges around measuring wellness, loneliness and health in coworking.

Cat Johnson: How has the idea of community building as a value proposition for coworking spaces changed in the last year or so?

Steve King: Coworking now has so many different segments that I think it is a value proposition for some segments — but for other segments, less so. With large corporations moving into coworking and coworking-like things, and leasing whole floors or large chunks of space, loneliness and the social side is just not an issue that’s coming up with them yet.

For individuals, particularly independent workers of various kinds — freelancers, independent consultants and that crowd — the social side is incredibly important.

Some space operators open big, fabulous spaces and then wonder how to go about the social side of coworking. They find that it’s harder than just putting someone at the front desk.

It doesn’t generally happen on its own [unless] you happen to have some members who take it on and do it. You really need to design community in if you want your space to be community-oriented and social. You have to think about it programmatically and have plans to get people interacting. And that can be hard to do.

You have a whole range now. Even places like The Wing, and niche spaces, are driving more toward the social side and realizing that’s an important piece. Certainly, it’s come a long way in terms of recognizing the broader social side as part of community than what I think it originally was. Back in the beginning of coworking, we all talked about community and we had that — we had some social activities — but it really wasn’t as developed as it is today. In many segments and types of coworking spaces, it’s social first, which is different. Before, it was always a place to work first. That’s a pretty big shift.

Is the social aspect a significant driver of industry growth?

We’re kind of in our third phase of coworking. The first phase was when it was all independent workers; then startups found it and loved it. Now this is a third phase where corporates are increasingly getting [that] it is for their telecommuters and remote workers.

You have to split how corporations view this into two sides. We’re seeing a much more lenient policy with corporations saying they’ll pay for coworking for their remote workers than we did just a couple of years ago. If you asked them if they’re doing this because their people are lonely, I don’t know that they’d say yes to that. They’d say they need to be in a social environment and that they’re hearing remote workers are not happy at home for a number of reasons.

The complaints about working from home have always been, number one, loneliness, and number two, productivity. Corporations are realizing that, if they want their remote workers to be productive and happy, they need to let them cowork — so that’s related to loneliness.

For independent workers, absolutely. A lot more of them are realizing that working from home is a lonely thing to do. So, if your space is going after that segment and focusing on the individual and the independent worker and the micro-businesses of one to three employees, the social side is very important.

How do you distinguish between the social aspect of coworking, loneliness and workplace wellness?

Wellness is hard to measure, as is being more healthy. But one of the things that is true, from a qualitative standpoint, is that if people feel they’re healthier, and believe they’re healthier, there’s a really strong correlation with them actually being healthier, because attitude is so much of this.

We’ve talked about this before, but you have the combination of social isolation — simply not being around other people isn’t a good thing for us from a mental health standpoint — then you actually have loneliness, which is the perception that you’re alone, even though you may be surrounded by people. So without a doubt, coworking is better for people’s mental health than not being in a coworking space.

What other coworking trends are you seeing?

Longer term, wellness is such a big deal within the corporate setting. I continue to believe that we’re not long from the day when the companies that use telecommuters are going to encourage people to go into a coworking space. This will be because a combination of the HR [human resources] people and the legal people will recognize that, if they don’t encourage it, they’re leaving themselves open to damaging their employees — maybe even legally liable.

But, even if not legally liable, the HR people will say that working from home has been proven to have a bunch of negative sides to it. (It has positive sides too.) So, if they tell employees they have to work from home, or if a remote employee tells them that working from home isn’t working for them, more and more companies understand that it’s just not that much to pick up a couple hundred dollars a month to let them get out of the house.

I think that will be increasingly common, and that will be driven by the broader wellness trend that’s sweeping corporate America, and understanding that working from home is bad for the mental health of a lot of people. Going forward, that will be a big driver.

The second thing is that the independent workers — because there’s been so much noise about coworking — are now getting it. They’ll continue to go into coworking more and more.

Addressing loneliness is an interesting value proposition for coworking, but it’s one of several. I wouldn’t base my business plan on curing loneliness if I was a coworking owner, but having it part of the quiver is a good idea.

Header image by CoWomen via Unsplash