The Response podcast and documentary - Shareable
Skip to content

The Response is a book, documentary, and podcast series exploring the remarkable communities that arise in the aftermath of disasters. Spanning the globe, each episode takes a deep dive into a unique location to uncover the under-reported stories that are hidden just beneath the surface of extraordinary events.

Listen to Season 2 of The Response Podcast 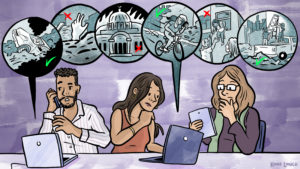 Season 2, Episode 1: Fighting misinformation in the aftermath of the Mexico City earthquake

In the first episode of our second season, The Response travels to Mexico City and puts the focus on the 2017 Puebla Earthquake — a magnitude 7.1 quake that toppled over forty buildings and killed over 350 people. Specifically, we explore the significance of information flows by telling the story of a very unique initiative that arose in the wake of the earthquake. 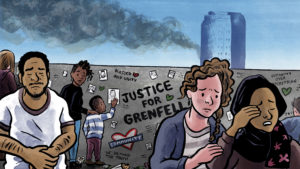 Season 2, Episode 2: Inequality, structural racism, and the fight for justice after the Grenfell Tower fire

In this episode, we focus on a disaster that was not only exacerbated by pre-existing inequalities — but one that was entirely created by them. On June 14, 2017, a fire started in a 24-story public housing apartment in West London called Grenfell Tower. Seventy-two people lost their lives, making the Grenfell Tower fire the United Kingdom’s deadliest disaster since World War II.

Season 2, Episode 3: Reimagining Paradise in an age of climate disruption

In this age of climate disruption and record shattering megafires, hurricanes, and the many other disasters wrecking havoc around the world, how do you rebuild from scratch? In the final episode of season two of The Response, we follow Allen Myers as he travels to Onagawa, Japan on a learning journey to support the rebuilding efforts in Paradise, California, which experienced the deadliest and most destructive wildfire in the history of the state. It’s a unique window into how residents are working together to build a new vision for what comes next, while fighting against the forces pulling them back towards the status quo.

Check out these special bonus episodes:

The Response Film is available now!

The 30-minute micro-budget film, “The Response: How Puerto Ricans Are Restoring Power to the People,” explores the mutual aid centers, or Centros de Apoyo Mutuo, that sprung up across the island after Hurricane Maria devastated Puerto Rico in 2017. Sign up to host a screening in your community. 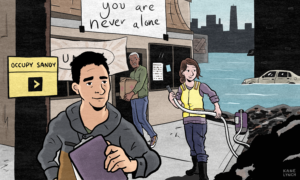 In the first episode of this series, we take a deep dive into the Rockaways Peninsula in New York City, to explore how, in the immediate aftermath of Hurricane Sandy, a grassroots network of activists and volunteers emerged under the banner of Occupy Sandy to coordinate one of the most effective relief efforts in the city. 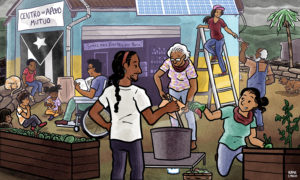 Season 1, Episode 2: How Puerto Ricans are restoring power to the people

In the wake of Hurricane Maria, a quiet revolution has been percolating on the island of Puerto Rico. In our second episode, we tell the story of how an impromptu community kitchen meant to help feed survivors in the town of Caguas quickly grew into an island-wide network of mutual aid centers (Centros de Apoyo Mutuo) with the ultimate goal to restore power — both electric and civic — to the people. 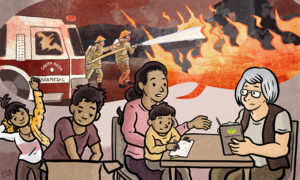 Season 1, Episode 3: The impact of Northern California fires on the undocumented community

The third episode of The Response travels to Northern California to provide a unique perspective on the topics of climate change and immigration. We explore how, in the face of ICE raids, labor violations, a housing crisis, and climate-fueled wildfires, the broader community is coming together to stand in solidarity with those who are being forced into the shadows. 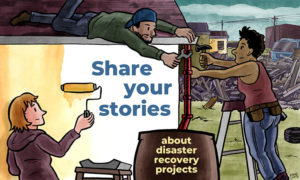 Last year we asked listeners to share their stories of disaster relief or preparation efforts, several of which can be read here. As we just wrapped up our latest series — including the second season of the podcast, a micro-budget documentary film, book, and how-to guides — to explore the remarkable communities that create systems change after disaster, and we want to hear from you. Please participate in Shareable’s Collaborative Storytelling Project.

Resources and tools for community resilience and disaster response 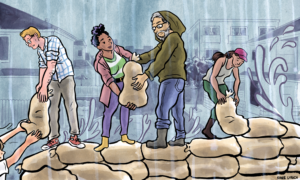 If the themes and stories presented in The Response have inspired you to take action in your community, here’s a growing list of resources to build community resilience before and after a disaster happens.

Download a free pdf of our new guide: The Resilience We Want: A guide to making your community space into a hub for local resilience & mutual aid

This 12-page guide introduces the vision and model of a resilience hub, a place where neighbors can deepen a sense of belonging, learn new skills together, provide for basic needs, prepare for disasters, and build a more inclusive and joyful community.

Stay up to date on everything related to The Response by subscribing to Shareable’s weekly newsletter. Please make a tax-deductible donation to support this project:

The Response is created by:

Shareable, is an award-winning, nonprofit media outlet and action network which promotes people-powered solutions for the common good. We catalyze social change through our solutions journalism, advocacy, consulting, and campaigns.