A neighborhood comes alive with possibility - Shareable
Skip to content 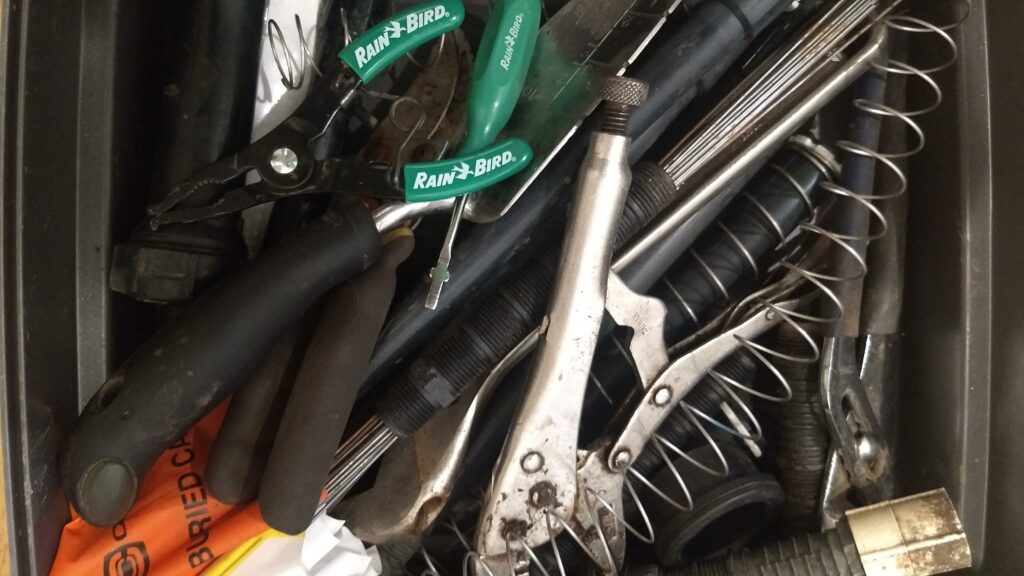 One contribution I’m making to my neighborhood is helping to fix our irrigation system. Here’s a peek inside my new irrigation tool box I assembled for the purpose starting with the box itself, which I scavenged from our dumpster.

Since my last post two weeks ago, my #LocalYear lifestyle has been humming along. I had pledged to do at least an hour a day of local activity, but I’m probably doing more than that now that I have two significant community projects underway — Cool Block and working on the neighborhood grounds committee. I’m no longer struggling to establish a new lifestyle. I’m more concerned with making it count as much as possible, encouraging my neighbors to join in, and stepping up my engagement with my city government.

Much to my surprise, my grounds work has started to eclipse my Cool Block work, at least temporarily. I’ve gradually ramped up my work with neighbors to rehabilitate our ailing neighborhood irrigation system. It’s become a regular thing. In fact, we recently established a routine of working two hours every Saturday morning.

Last Saturday was particularly rewarding because I had a bunch of interactions with neighbors as the three of us went about our work. For instance, just as we were wondering why an irrigation line wasn’t working, a neighbor came out on her balcony. I said hi and we got to talking. She let us know that that line had been broken for 20 years! Her neighbor joined the discussion and we all made a plan to fix the line and do some new, water-light plantings.

In another instance, a neighbor was playing with her kids in the common area. She thanked us for our work and we started chatting. It turns out she had led the grounds committee previously. I had a few questions about grounds maintenance and she followed up by email with some great advice.

This increase in grounds work has resulted in several changes. I was nominated to lead the grounds committee. I accepted with the condition that the role be shared, so I’m co-leading the committee with another neighbor. My neighbors are noticing the effort we’re putting in and voicing their appreciation. I have to admit, that feels good.

I’ve also started to see my neighborhood differently. Now that I’m taking the initiative, everything about our neighborhood is up for reconsideration. I’ve redefined it for myself. It’s a field for action. It’s something to be molded. It’s not just where I live, it’s a place I co-create. Consequently, the idea of transforming our traditional neighborhood into our version of an ecovillage doesn’t seem totally out of reach like it used to. I don’t know if we’ll get 100 percent there, but the neighborhood has come alive with that possibility.

This new perspective includes seeing the connection between community engagement and the care that our grounds get. A few of my neighbors see it too. That’s why our newly energized grounds committee wants to get more neighbors involved. I feel like we’re in the process of forming a commons. That hasn’t been deliberate, but I’d like it to. I have one or two things in mind to nudge it in that direction.

In addition, this Powerpoint jockey now has calluses on his hands for the first time in years. And I know way, way too much about sprinkler heads. I’ve gotten a bunch of new irrigation tools and have a growing inventory of sprinkler parts. I’ve become a tad obsessed. It’s a relief to get tangible results through a hands-on challenge during a time when so much is out of my control. Thankfully my wife Andrea supports my obsession, though she teases me about it. The other day she joked that I’m starting to act a little too much like the Bill Murray character from the movie CaddyShack. I take that as a compliment. Groundskeeper Carl Spackler is a legend!

In addition to my grounds work, Cool Block continues. It’s been challenging to keep it on track during the pandemic. I’m grateful that most of my neighbors who signed on have stuck with it. To date, we’ve taken 78 actions which have reduced our collective CO2 emissions by 10,000lbs or 7.4 percent. The neighborhood Slack group, an outgrowth of our Cool Block effort, continues to hum along with cute animal pics, county COVID-19 updates, recipes, tool lending, goods exchanges, and a recent electronics recycling drive.

Going forward, I’m going to figure out how I want to engage the city government now that I’ve made substantial progress on personal behavior change and community projects, two of the three focal areas I wanted to explore during my #LocalYear. Stay tuned.

This post is part of Neal Gorenflo’s year long experiment in living locally (#LocalYear). Follow his journey by reading other posts in the series.