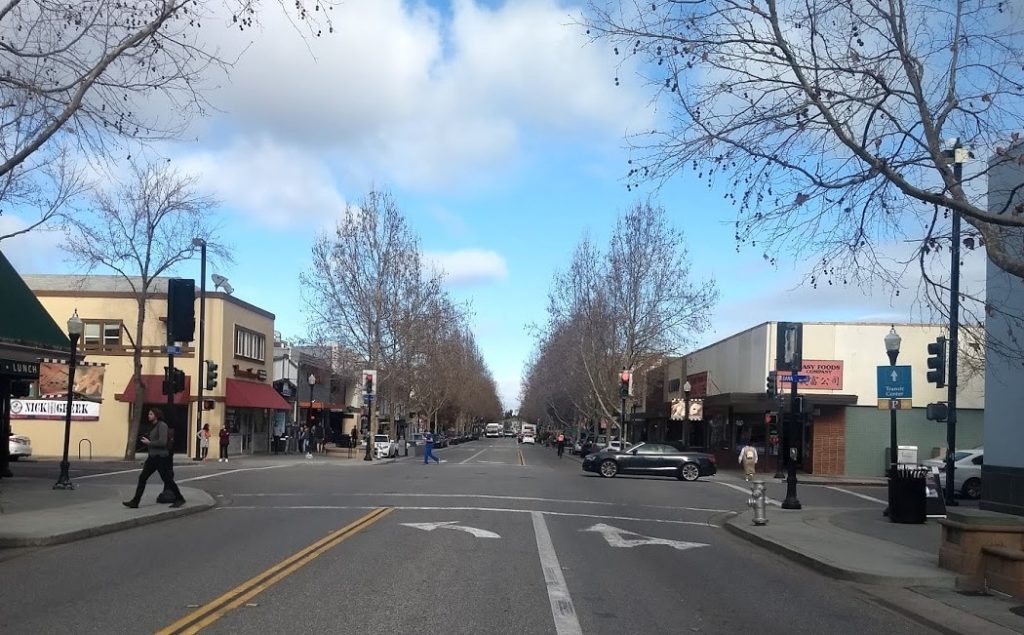 Castro Street, the main drag in downtown Mountain View, California, my hometown, the birthplace of Silicon Valley and the headquarters of Google.

In 2015, I began experiencing the world in a different, less enjoyable way. It started with occasional bouts of nervousness that I didn’t recognize as anxiety — because I’d never experienced clinical anxiety before. In fact, 2015 was preceded by the happiest, most fulfilling decade of my life.

These bouts, while only occasional, were significant enough that I began to question myself, the world around me, and my relationship to it in a deeper way than normal.

Next, that anxiety was deepened by dramatic changes on Facebook. I had been a heavy user since co-founding Shareable six years earlier. My Facebook feed became flooded with ridiculous, obviously false “news” stories that were clearly designed to shock or enrage. The high volume and low quality of these articles were deeply puzzling. Why were people sharing such crap? And why was Facebook allowing it to proliferate?

In response, I changed my Facebook settings to limit my exposure. However, I missed the bigger picture — that billions of people were likely experiencing the same toxic brew, and that could have dramatic, society-scale consequences.

This was just before the 2016 U.S. presidential election, which, along with #MeToo, #BlackLivesMatter, and the rise of the alt right and identity politics, laid bare deep social divisions that added to my unease. Social and other media not only exposed divisions based on gender, class, race, religion, geography, and ideology, they seemed to make them worse. The U.S. was not alone in experiencing upheaval. The U.K., for one, began its meltdown over Brexit around this time.

If this wasn’t enough, the volume of trusted news about climate change and other crises was also rising. The cumulative effect was that I felt like I was being hit by a tidal wave of disturbing information. It was depressing and disorienting — and only contributed to my growing sense that our society was drifting toward disaster.

What social devolution has done to us

Social media has in many ways moved us beyond social isolation, which is corrosive enough, into something that’s an even bigger threat to our individual and collective health: divisiveness. Instead of bringing us together, social media has turned one against another, and, in the words of technology ethicist Tristan Harris, is “downgrading” us psychologically. His congressional testimony last year clearly showed the threat social media poses to democracy and our mental health.

We’re not just in our separate “filter bubbles” anymore. That actually sounds safe! The bubbles have burst. The space between is now filled with anxiety, fear, and even hate. It feels like we’ve been weaponized against each other. What can come of a society where each of us is hunkered down in our own individual “filter foxholes”?

I see this first hand when friends with “wrong” opinions get bullied or shunned and our ability to engage in constructive conversation deteriorates. Like many, I sometimes self-censor or avoid conversations for fear I’ll be misunderstood or misspeak and wind up being shamed on social media. It weighs on me that I can’t speak freely and that we live in a society where everyone is one utterance from reputational ruin. Where’s the joy in this? This feels like a devastating loss of security, freedom, and conviviality.

It’s no wonder that anxiety is the top mental illness in the U.S. affecting nearly 20% of the population, is on the rise, and that the U.S. is the world leader. We’re definitely #1 — in anxiety! Worse yet, children and teens are hit the hardest. I’m apparently far from alone.

In this new situation, bottom-up coalition- and power-building seem even more difficult, and thus positive change more remote. We can’t heal these divisions through the medium that helped cause them. We must come together face-to-face, and with more intensity than we pursue life online.

While I’m still relatively healthy, I feel noticeably worse physically and psychologically than pre-2015. “We are drowning in a devolved, WWF Smackdown-style world,” wrote Devo founder Gerald Casale when the band was nominated for the Rock & Roll Hall of Fame in 2018. I feel the pain of devolution in my bones and brain.

What’s more, my advantages provide limited protection. My immediate family is solidly middle class, thanks mostly to my wife who works in a stable profession. Our health, family life, and social circle are good too — at least for now. This is normally a decent shield from challenging times. However, I don’t feel well or safe in our predatory media environment, runaway extractive economy, disintegrating social fabric, and increasingly unstable climate. Is anybody safe?

We’re facing powerful, growing devolutionary forces. I see our current devolutionary trajectory as a greater existential threat than any other, including climate change, because no crisis can be adequately met by a divided, disempowered people. While sharing is an antidote, the tide pulling us feels more powerful at the moment. We’re drifting toward more authoritarianism, incoherence, and mental instability.

How to out swim a riptide

This moment reminds me of the time I swam out at dusk to body surf a storm surge in Ocean City, Maryland. I was quickly pulled by a riptide a couple hundred yards offshore. I tried to swim in, but couldn’t. I cried out and waved my arms for help. But no one could see or hear me. Nearly everyone, including the lifeguards, had left the beach. I realized I was in serious trouble and could drown. I nearly panicked, but I remembered to swim parallel to the beach to escape the riptide. Using what energy I had left, I slowly made my way to a jetty nearby. I saved myself, but only after getting smashed into the rocks by a wave as I climbed the jetty. I emerged from the water bloodied, but alive.

I’m at a crossroads like that moment in the riptide, where I know I’m in serious trouble and must change course. That’s why I feel a powerful call to deepen my commitment to the everyday practice of commoning. I want to spend more time interfacing with people, my town, and nature rather than screens. I want to find common ground with my neighbors through the many ways we can make our everyday lives better together. I want to practice everyday and formal democracy with a new, alivening intensity. I want to, as Douglas Rushkoff would say, join Team Human and upgrade my psychological resilience and collaboration skills.

Turning toward local connection and action

It’s time to swim perpendicular to the tide, time to become a real citizen, and time to practice democracy like my life depends on it, because it does. And start off in this new direction through a one year life experiment I’m calling The Year of Living Locally, which I’ll blog here on Shareable.net. My plan is to try local experiments and blog my lessons learned at least 1-2 times a month. Below are the three areas I’ll focus on:

Others might be able to do more. For my part, I know I can’t do more without first giving myself a thorough re-education. I’m a slow, deliberate learner who responds to a mix of experiences including reading, group discussions, real-world experiments, and moments of deep, even spiritual, reflection. It takes a lot for me to change, but the effort has always been worth it. While something bigger could emerge from this year, I’m starting out in this modest way with modest expectations.

Can you join me with your own Year of Living Locally? Or another life experiment of your own design? Please share your ideas and suggestions — and your own commitments. I’ll share my progress using the hashtag #LocalYear on Twitter. I invite you to share your local adventures that way too. We’ll host a forum at the end of the year to discuss what we’ve all learned, and the difference we made.