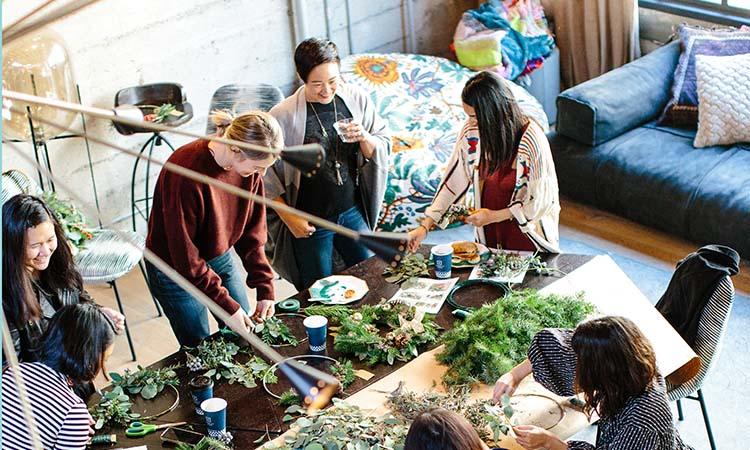 Pantry is an excellent middle-English word for a very 21st century idea: a peer-to-peer community food collective creating larder-filling products and changing lives in one of London’s poorest boroughs.

Here’s how the program started: enthusiastic amateur cooks in Barking and Dagenham were given expert advice on refining their favorite home recipes into sellable products, perfecting batch-cooking, developing packaging design and sourcing ingredients. Finally, tastings were arranged, and the products were tested in market stalls.

“They’re such a great team,” says Nat Defriend from the Participatory City Foundation, which provides funding and support for the program. “There’s a woman who does amazing things with brownies, and a women tempering her own chocolate. We’ve got a cake-maker. We’ve got a guy who makes incredible chutney. We’ve got a woman who makes jollof rice, and another who makes unusual and delicious things that are kind of like pesto, but not pesto.”

“They’re delicious, really credible food products — which until recently they were knocking up in their own kitchens,” he added. “And what’s really important is they’ve begun to operate as a collective: They’ve been batch-cooking together, and are taking on catering commissions together. All we did was to remove obstacles and barriers in their path, and take on the financial risk.”

Launched in late 2017, Participatory City’s ‘Every One, Every Day’ project in the Barking and Dagenham borough is awe-inspiring in its ambition, and almost certainly the largest of its kind in the world: a borough-wide, five-year, £7.2m project which aims to involve 25,000 residents and create more than 250 neighbourhood-led projects. Pantry is one of its early success stories.

Barking and Dagenham is absolutely the right place for such a radical intervention. Still rebuilding its reputation, and its social cohesion, after the far-right British National Party won a horrifying 12 (out of 51) council seats in 2006, it has some of the worst rates in the British capital for infant mortality, educational qualifications, evictions, low pay and unemployment.

The borough’s population is both growing and turning over at a remarkable rate, with a rapidly growing number of residents for whom English is a second language, and a strikingly young population: 27% of the population of roughly 210,000 are under 16 (compared to 19% nationally). And Barking and Dagenham, where 21,000 residents are pensioners, is not immune from the nationwide crisis of loneliness and social isolation, which afflicts one in seven Britons.

A research-led approach to community change

Participatory City had previously tried out its approach in Lambeth in south London, on a smaller scale, in a £300,000 project, based out of one “shop” site (there are five across Barking and Dagenham). “The main thing we learned from that,” says Defriend, “is that in order for it to be potentially system-changing, or life-changing for large numbers of residents, we had to operate at scale.”

It’s an approach with a strikingly long gestation period. Every One, Every Day emerged from seven years of research into peer-to-peer models, whereby residents of neighbourhoods designed projects and activities together to help make them happier, greener places to live. The aim was to create a new model, distinct from the ways people usually seek to make changes in their communities, whether through formal local democracy, charities, local enterprise, or campaigning and protests.

Participatory City’s key innovation was right in its name — putting participation at the center, above any other objectives of its projects. Getting people working together, or even just alongside one another, sets the stage for collaboration and connection, and can play a huge role in combating social isolation by getting people more engaged with others in their communities. Once people have come together to work on projects, Participatory City provides a supportive ecosystem that it’s found offers projects the best odds for building successful community engagement.

“Our founder Tessy [Britton] noticed that the key difference with participation as a model was that it was mutually beneficial, and much more inclusive. She then began to ask herself, well, why isn’t there infrastructure for these sorts of projects, in the same way that there is for all those other models?” It was the need for this “missing piece of the jigsaw,” Defriend says, which led organizers to create the Participatory City platform.

The problem of existing participatory community projects without such infrastructure and resources to support them, is that they tend to be led and sustained by people who are highly confident, highly resilient, highly skilled, and have plenty of time and energy in their lives to devote to them — and even one of those criteria excludes a lot of people. So the Participatory City Foundation set out to broaden participation beyond those already brimming with social (and sometimes financial) capital.

The idea of this new platform is to “clear away the burden” on local people associated with delivering these types of activities. No requirements for formal business plans were imposed on local entrepreneurs interested in joining the project. “Our goal has been to systematically remove obstacles in the path of people wanting to get things done in their community,” Defriend tells Shareable — and in doing so, to significantly increase both the numbers and diversity of types of people getting involved, and to give residents the tools to help themselves and each other bring ideas to fruition.

The importance of building in flexibility

To celebrate Every One, Every Day’s first anniversary, the organization opened its largest site so far in the borough, “The Warehouse,” and hosted a potlatch dinner attended by 180 residents, who arrived with armfuls of home-cooked food. “It was absolute buzzing,” Defriend says. The next day, around 300 people turned up at The Warehouse’s first open day, attending workshops around everything from beekeeping to robot-making, from dance classes to recycled craft activities and “make and mend” sessions.

One year on, Participatory City are keeping operations flexible, while substantially expanding their scope, and trying to bring new residents through the doors all the time. “All the research says that it is the participation itself which is impactful — and that’s what we’re finding,” says Defriend. “The intention is that it doesn’t get sort of calcified, and keeps evolving. As resident confidence increases, the theory is the residents will take on much more of the responsibility for spreading the word, with the platform providing the basics — the health and safety and so on — so the same infrastructure can extend much further into communities.”

Guardian writer George Monbiot reported on the project in January, and said he kept hearing the same comment from participants: “I hated this place and wanted to move out. But now I want to stay.”

Defriend is keen to emphasise that each of the growing legion of Every One, Every Day projects are genuine peer-to-peer collaborations. “It’s not one resident donating their time to another who needs it — which would be the charity model — and it’s not a commercial transaction, for profit,” he says. “It’s a genuinely mutual endeavor, shared between the residents. And that’s why it works.”

Dan Hancox is a native Londoner who writes about music, politics, gentrification, cities, protest, public space, food, multicultures, social movements, Spain and more, chiefly for The Guardian, but also the

Dan Hancox is a native Londoner who writes about music, politics, gentrification, cities, protest, public space, food, multicultures, social movements, Spain and more, chiefly for The Guardian, but also the New York Times, London Review of Books, Newsweek, Vice, and others. His first book, The Village Against The World (Verso), told the story of the 'communist utopia' of Marinaleda in Spain, and his most recent book, Inner City Pressure: The Story of Grime (Harper Collins), looked at how music, gentrification and riots overlapped in the first decades of the 21st century. He's on Twitter @danhancox, and his website is danjhancox.wordpress.com.