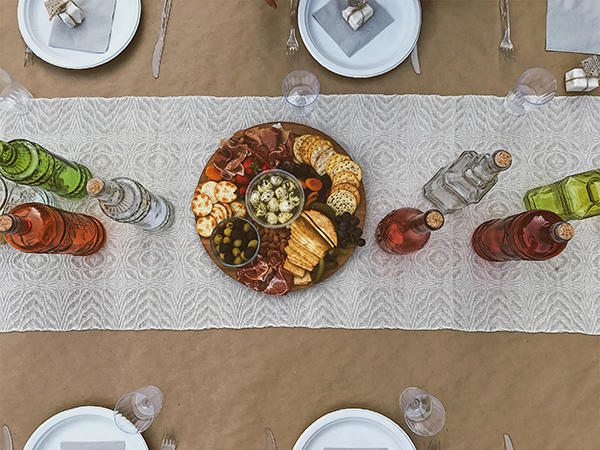 Launched in 2014, On the Table has brought together tens of thousands of citizens nationwide to discuss ways to strengthen their communities.

Five years ago, thousands of Chicago residents huddled in small groups around tables in restaurant dining rooms, conference rooms, community centers, school auditoriums and churches to break bread and openly discuss the critical issues in their city that mattered to them.

The candid, and often lively, conversations offered the more than 11,000 residents — ranging from small business owners and nonprofit organization leaders to local school teachers — a chance to move beyond the surface into questions about how they can make their city a better place to live. Approaches ranged from improving the educational system to getting fellow neighbors more engaged with one another — and the meetings have resulted in real change.

“We created a space where everyone can be heard,” says Daniel Ash, chief marketing officer at the Trust, the nation’s second-largest community foundation and creator of this initiative, known as On the Table.

Borne out of a desire to celebrate the foundation’s roots of community building, the initiative started as a way to gear the foundation up for its centennial year in 2015. Then the concept took off, with the number of participants doubling each year up to a peak of 100,000 in 2017. All told, 211,500 people have taken part. The Trust partnered with the John S. and James L. Knight Foundation to expand its reach, creating the On the Table National Learning Network, a digital platform designed to allow other community foundations, civic organizations and nonprofits to replicate the program.

Since its inception, “the response has been overwhelming, and for those who know On the Table in Chicago, it has become a tradition,” Ash says.

So far, 30 community foundations have replicated the initiative in other cities. Those meetings have developed sustainable and remarkable differences for communities. In Gary, Indiana, youths created their own YouTube channel to focus on what they liked about their community. In Lexington, Kentucky, the dialogue led city planners to revise their growth and development plan to take citizen suggestions into account.

Among the community foundations hosting their own version of On the Table, 10 received funding through the Knight Foundation in 2017. The foundation invested $1.15 million in total to expand the programs in areas like Lake County, Indiana, Lexington, Kentucky and Long Beach, California.

“On the Table has helped us to pull those residents who have been disengaged back into the social fabric of their community,” says Erica Fizer, director of communications and marketing at the Legacy Foundation in Lake County, Indiana — located just east of Chicago. “It has empowered people to take that first step and say, ‘we can come up with solutions for our own community and we don’t have to wait for others to guide us.'”

The Legacy Foundation hosted 133 conversations in 2017 — with about 1,300 participants — across all 25 communities in the county. Fizer says the foundation let the hosts decide how they wanted to facilitate those conversations, and through that approach, key issues rose to the top including education, youth development and the state of the county’s economy.

In 2018, the foundation followed up by hosting On the Table conversations that allowed residents to delve further into those issues and develop solutions — many of which the foundation funded through community action awards. That included a new community-based YouTube show, called “What’s Good, Gary?”, produced by local middle school students who wanted to shine a light on the positive aspects of their community.

“The students felt like there was a lot of negative news about their community, and this broadcast allowed them to change that narrative,” Fizer says.

Based on surveys of more than 12,000 residents from across the 10 cities, the Knight Foundation’s 2017 national report, released last year, showed that nearly two-thirds of respondents (64 percent) spoke with someone new. Also more than half of the participants (58 percent) says they have a somewhat-to-much better understanding of how they can help to address issues facing their communities. What’s more, 75 percent says they took part in a conversation that produced specific solutions to issues facing their communities. The national report was prepared by the the University of Illinois at Chicago’s Institute for Policy and Civic Engagement.

Also while the conversations varied, the report showed that six themes emerged as prominent topics. That included equity and social inclusion, economic issues and poverty, education and youth development, public safety and the judicial system, transportation, housing and homelessness.

The state of housing and homelessness rose to the top for the 3,000 Long Beach residents who participated in the Long Beach Community Foundation’s event, held in September 2017 in partnership with grassroots group We Love Long Beach. Together, they renamed their event to “Around the Table.” Most of all, the residents wanted to know what they could do, but didn’t know where to turn. The following year, the foundation responded by hosting a three-day event that allowed residents to meet with nonprofit organizations and city officials who work directly with the homeless population and housing in the city, which has bolstered not only awareness around the issues but also community involvement, says Marcelle Epley, the foundation president and CEO.

“We found this to be a golden opportunity to take advantage of the momentum,” says Epley. “The massive awareness campaign that we orchestrated helped to create more understanding and more compassion.” The city’s Multi-Service Center, which provides an array of services including outreach and referrals to shelters and social service programs, has seen an uptick in donations, she notes.

Based on suggestions from the 2018 “Around the Table,” the community foundation also awarded more than $17,000 in grants to organizations and initiatives focused on mitigating homelessness and the housing crisis. Urban Community Outreach Inc., which helps the homeless or those at risk of becoming homeless, was among the recipients. That funding will support placing more than 240 families in permanent housing.

“The overwhelming theme here is that people want to help,” says Epley. “We offered them a way to do so.”

Big ideas and solutions can spring from having these small conversations, says Lisa Adkins, president and CEO of the Blue Grass Community Foundation, which has hosted an On The Table event in each of the last two years. The foundation is gearing up for their third consecutive event on March 27.

In 2017, more than 11,000 people joined the discussion, and as part of their event, the city of Lexington, Ky. embedded their city planners in conversations. That information was used to help inform the city’s 2025 Comprehensive Plan — an outline for future development and growth in the city while preserving existing neighborhoods, downtown and rural areas.

“Having the conversations can bring new people together, bridge differences and produce new relationships,” says Adkins. “There’s real power in that.”