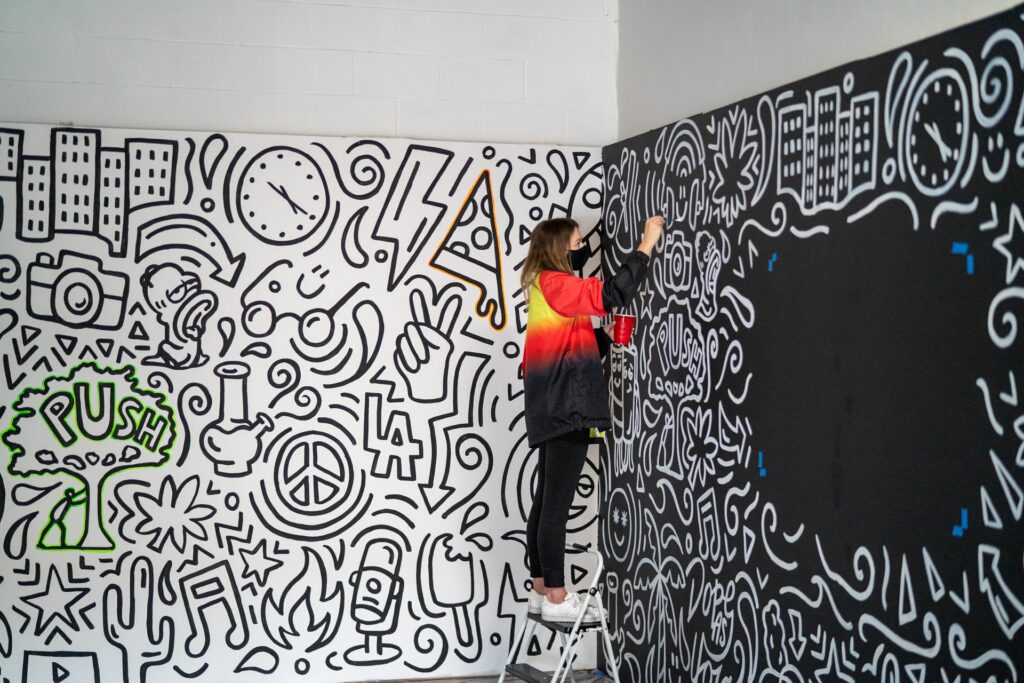 When we learn about civilizations that have come and gone, maybe we learn about their agricultural practices, their economies, and even their streets and plumbing systems. Yet what endures most and captures the hearts of those alive today are the crafts and the paintings, the poetry and the architecture.

And still, when it comes to the creation of works of art in our time, the broader society we live in has normalized the archetype of the “starving artist”. Because they create works driven by personal inspiration and an aspiration of beauty, the work of artists isn’t really “labor” and so the artist must do other work to pay the bills—at least this is how the dominant narrative goes.

Yet art is labor and the fruits of that labor are what make society worth living in, so artists and cultural workers should get paid fairly, should have access to benefits like healthcare, and should have ownership over their work and process.

This is the foundational belief of the new worker co-op, Guilded. Launched as a pilot project about eighteen months ago, Guilded aims to provide benefits, administrative support, employee ownership, and equity to freelancer artists and other contract workers. This will allow freelance artists a stable foundation and organizational support so that they can do the work that we know to be valuable to civilization, now and for centuries to come. And although Guilded is starting with artists, the idea is to expand it to all kinds of workers, to eventually offer a mechanism and platform to extend employee benefits to all those who do freelance work.

Support for freelancers, a growing part of the workforce

In today’s economy, an increasing share of workers are not employed traditionally, but rather exist as freelancers, contractors, and self-employed workers. In fact, at least a third of all US artists were self-employed, according to a 2019 report by the National Endowment for the Arts. In the US, artists are 3.6 times more likely to be self-employed than the average worker.

When you’re an employee, you have less autonomy over what you’re doing and how you do it. But your employer must provide training, guidance, and materials to do your job, and also benefits like healthcare (if you are a full-time employee) while paying into Social Security, Medicare, and unemployment systems.

Conversely, as a contractor or freelancer, you have the autonomy to provide goods and services in any manner you see fit, in agreement with the organization you are doing work for. But you must also pay state and federal taxes and social systems yourself, account for your own operational expenses, and might even have to pay higher rates to purchase your own benefits.

Freelancers are at a much higher risk of exploitation. [They] don’t enjoy the traditional benefits of the traditional employment contract, often work without benefits, and without legal protection. — Hope Mohr, General Manager of Guilded

Today, freelancers and contractors account for a huge portion of the economy. Even large companies like Google have more contractors than employees. A report by Upwork, a platform that helps freelancers find work, found that over a third (36%) of the US workforce engaged in some kind of freelance work during 2021.

Some services that Guilded offers are not all that uncommon to a traditional worker: the platform offers free or discounted tax prep and access to health benefits. It has a Guaranteed Payment Pool that pays out freelancers on time, even if a client delays payment. “Guilded is for everyone, it’s designed to meet the needs of anyone, any type of freelancer anywhere in the country,” says General Manager Hope Mohr. “Our focus right now is on artists and cultural workers because I feel like that has been a really neglected part of labor organizing.”

More than just a set of financial and administrative services, Mohr emphasizes Guilded as a tool for empowering and organizing artists. Guilded aims to go beyond what already exists, facilitating the pooling of resources while leveraging power for artists and freelancers. As a part of its outreach, it offers training and political education on building collective power.

In fact, Guilded got started after being incubated by the United States Federation of Worker Cooperatives (USFWC), a larger organization that provides support and resources to worker-co-ops across US industries.

Daniel Park, USFWC staff member and contractor for Guilded helped the initiative get its footing. “Guilded members are collectivizing their purchasing power so that they can get discounted or free access to tax prep, healthcare, etc.,” he says. “None of this would be possible if it was just one person. It requires everybody to come together and organize and combine their resources and access.”

Park initially got connected to USFWC through organizing for racial justice in the arts, and sees Guilded as a continuation of that work, because the lack of support and services disproportionately impacts artists from marginalized communities.“That lack of support impacts Black people more. Impacts trans folx more… we’re really moving through all of this not just with a labor framework in mind but also an intersectional framework.” For example, a 2020 report by Human Rights Campaign found that twenty-two percent of transgender adults and thirty-two percent of trans adults of color lack healthcare, significantly higher than 12% for non-LGBTQ adults.

As an artist, Park is also a Guilded user, having utilized their services for at least four previous client contracts. They’ve helped with contract language but also with handling payment processes. Guilded’s aforementioned “Guaranteed Payment Pool” even took over when one client was late to pay, paying Park on time and collecting payment from the client later. In instances like these, Guilded even has in-house staff follow up with the client so that artists won’t have to.  “There’s another person here who is handling part of this work. It’s not just me anymore, I’m not alone in this anymore, and I’m not the only person looking out for me,” Park says.

Guilded’s business model draws from the success of Smart in the European Union, which has been offering employee-style benefits and employee ownership to freelancers for decades now. Guilded uses the same 6.5% fee that Smart uses—charged to clients, not freelancers. The hope is that clients see the value of paying this fee, both in terms of freelancer empowerment, but also because it could reduce administrative overhead for those that use a lot of freelance labor.

As for the model itself, Guilded’s stakeholders consist of three types of users: regular users, freelancer-owners, and employee-owners.

“I do think that’s one of the most radical parts of this,” says Park. “How often are freelancers not given ownership over their work and probably don’t feel much ownership either, over their labor?”

Launching out of an experimental phase

Currently, Guilded is in an experimental phase.  “[We are] testing out, ‘Does this work? How does it do in practice? Is it benefiting people?” Park says, adding that developments are being made hand-in-hand with artists. “Not just user metrics but…qualitative; we want to have a conversation with you and hear about how is using Guilded going?”

The idea is to replicate this in other regions of the country, and to eventually include all kinds of freelance and contract workers. In addition to Philadelphia, there is also a Guilded network in the San Francisco Bay Area.

With about 40 active users and many others signed up, Guilded is building at the speed of trust where artists connected with USFWC have preexisting connections to other artists. Soon enough, there may be a cohort of Guilded freelancers near you.

Check out these related articles & resources: