A message from the future of paradise - Shareable
Skip to content 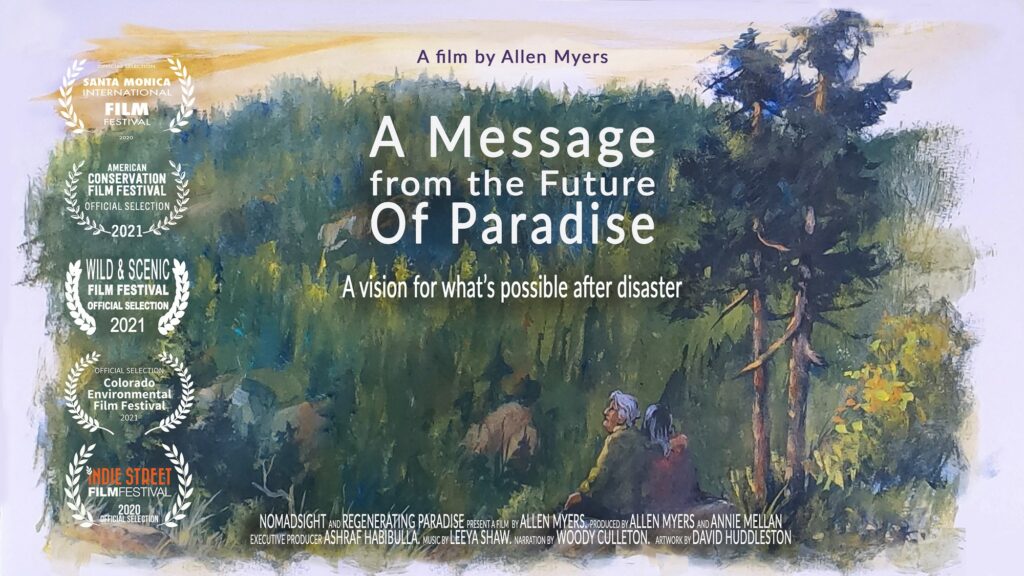 Across the western United States, and in many other regions around the world, wildfires are growing in scale and ferocity. This year’s California Dixie Fire was the largest non-complex wildfire in the state’s history, burning over 950,000 acres and 1329 structures; second only in size to last year’s August Complex fire, which became the state’s first Giga-fire, burning over one million acres.

Three years ago today, on November 8th, 2018, the historic Camp Fire destroyed the town Paradise and killed 85 people. In its wake, the community gathered to process what had happened while looking to the future. A series of community meetings identified “nature” and “community” as key values for Paradise. Their vision ensured housing and employment for the survivors and an economy and community that are resilient in disaster.

“A Message from the Future of Paradise” is a 7-minute film that imagines the rebuilding of Paradise, California towards a very bright future. Filmmaker and Paradise native Allen Myers hopes this film offers a vision for other communities facing disaster. He set out to compile this yet-to-be-manifested vision into a blueprint for the town. “I knew I had to return to my hometown after the fire. With much of the media coverage focusing on the devastation, I wanted to make a film that brought hope and inspired action,” says Myers.

You might remember Allen from the episode of The Response podcast, “Reimagining Paradise in an age of climate disruption,” which tracked his learning journey from Paradise to the Japanese town of Onagawa which has taken a unique path to reimagine itself, after similarly being wiped out during the Triple Disaster of 2011.

This film is set 50 years in the future and reflects on the rebuilding process in Paradise. It starts with a simple question: What would a town look like in the future if it were rebuilt centered around community and nature?

Composed of 12 original paintings documented from start to finish with stop-motion, stroke by stroke the artist creates each painting, mirroring the process of a community living towards a vision. With each step, the path forward becomes clearer.

A Message from the Future of Paradise was created to illustrate that possible future and is now a guiding vision for the non-profit organization Regenerating Paradise which seeks to grow this vision into reality.