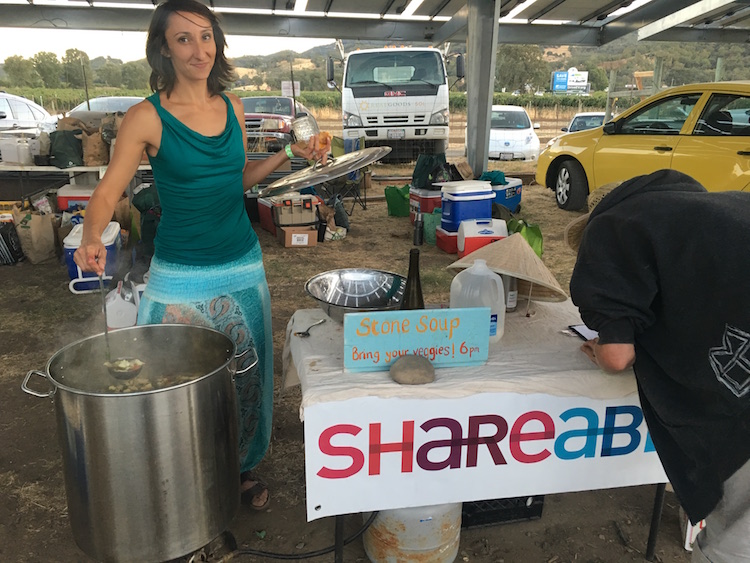 “Stone Soup” is an old and poignant European folktale. Regionally known as Axe, Nail, Button, or even Wood Soup, the story first made its way into print as “Soupe au Caillou” by French author Madame de Noyer in 1720. Today, people are familiar with Marcia Brown’s version from 1947 which has become a commonly read children’s book.

The story goes like this: A group of weary, hungry travelers come to a village and ask for some food. They are turned away, so they declare that they’re going to make a “stone soup” and place a pot in the middle of the village with some water in it and a stone. This piques the curiousity of the villagers, who begin sharing a little bit of whatever they have to make the soup. The large pot of soup, filled with ingredients contributed by everyone, feeds the whole community.

When I was 11 years old, my friend and I snuck into the Stone Soup Festival in California. While I had heard of the story when I was younger, this was the first time I experienced the real thing. Fast forward about 20 years to the spring of 2013, when I hosted my first Stone Soup as part of the “Eat-in at the FDA for GMO Labeling and Food Democracy” event just outside of Washington D.C. Nearly 500 people who had traveled from 14 states contributed ingredients to a large soup pot, which managed to feed everyone. Since then, I have carried the same stone and hosted a number of similar events at universities, conferences, and community gatherings around the world.

One of the most surprising things about Stone Soup events is that every soup we’ve made has been delicious, regardless of what ingredients are in it. The following is a step-by-step guide to hosting a Stone Soup.

A “Stone Soup” of course needs a stone. Personally, I like a soup stone with a little weight to it; a stone that fills the palm of your hand. You can choose the stone yourself in advance or wait till the event and choose the stone as a group. I recommend that you choose a smooth stone (river rocks are great) that will be easy to clean, before and after, and won’t crumble or break off in the soup.

Many people have never heard of the “Stone Soup” story, and many who have heard the story have never participated in a real “Stone Soup” event. Summarize the story and explain how the soup will be made and include a clear ask for what you want attendees to bring.

Making the soup together is the best part. People always seem to be happy to lend a hand. There will always be people who aren’t able to provide something or forget to bring an ingredient to the event. There will be plenty of ways for everyone to participate and support the event. Here are a few key suggestions to ensure a delicious and safe-to-eat soup:

I like to gather everyone up at least a couple of times while making the soup: the first time to tell the story and the second time — right before the soup is served — to give thanks. There are all kinds of additional activities that can happen during the event, like a music jam, skillshare, or community meeting.

Hosting a “Stone Soup” is fun and easy. If you’re looking for a little extra inspiration, check out this guide from Shareable about how to host a great sharing event. You can also add a “Stone Soup” to an existing event like a conference or a community meeting. This can be a great way to go, as many of the event logistics and promotion is already taken care of. If you’re planning to to add a Stone Soup to another event, it’s very important that information about the soup is sent to all attendees before the event and that there is plenty of signage at the event.

If you’ve made it this far, you should be good to go. Please send pictures from your “Stone Soup” to info@shareable.net and use #StoneSoup and tag @shareable on social media. If it’s a public event add it to our events calendar. Bon appetit!