'This land is your land': Reclaiming public land for communities in Brooklyn - Shareable
Skip to content 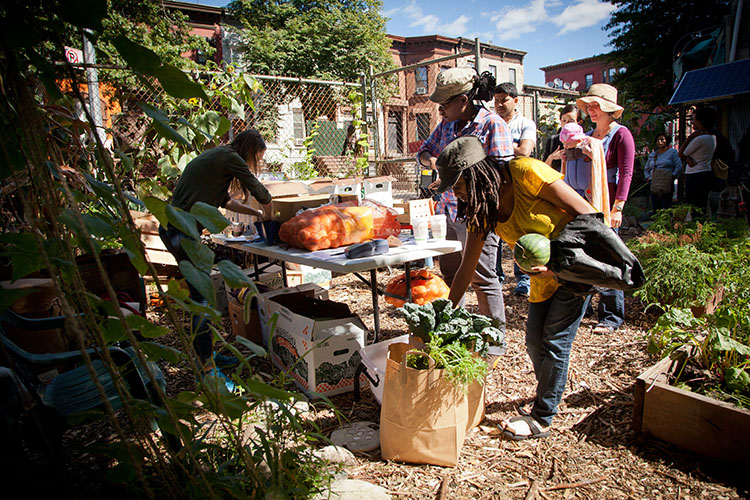 Here’s the problem: Located primarily in areas of the city where low-income communities of color live today, more than a thousand vacant public lots languish behind fences, collecting garbage. One such lot was in Paula Segal’s Bedford-Stuyvesant neighborhood in Brooklyn. In 2010, she began talking to her neighbors about this lot. She gathered as much information as she could find about it and called a community meeting. That meeting led to more meetings, which led to Myrtle Village Green: an active, nearly 2-acre community space with garden beds, an outdoor movie screening area, a pumpkin patch, and an educational production and research farm. From then on, she thought, “How many more such lots are there in New York City?” She got access to city data and learned that, in 2001, 596 acres of public land were waiting for communities to transform them, and soon after, 596 Acres was born.

Here’s how one organization is working on the problem: The 596 Acres team starts by translating the data available about vacant municipal land into information that can be useful in context, using customized mapping tools. With that knowledge in hand, they put signs on the fences of vacant city-owned lots that say, “This land is your land,” in English and Spanish, and explain which agency has control over the property. The signs also say that neighbors, together, may be able to get permission to transform the lot into a garden, park, or farm. They list the city’s parcel identifier, and information about the individual property manager handling the parcel for the agency, including a phone number.

The signs also connect neighbors to an online map and organizing web-tool called LivingLotsNYC.org and to 596 Acres’ staff, who steer and support residents through a bureaucratic maze in order to gain access to the space.

596 Acres takes on a supportive and advocacy role during each campaign — but residents remain the leaders. Each space, ultimately, is managed autonomously, transformed and maintained by volunteers and local community partners to gather, grow food, and play.

Header image of 462 Halsey provided by Murray Cox (Copyright held by the photographer; Expressed written permission for this publication only)

596 Acres champions resident stewardship of land to build more just and equitable cities. We build tools to help neighbors see vacant lots as opportunities and create needed green spaces that become focal points for community organizing and civic engagement. We turned our original online map into a sophisticated interactive organizing tool, Living Lots NYC, which provides information about vacant land across NYC and is supported by signs and other print materials. We also developed urbanreviewer.org, nycommons.org and onedollarlots.org. These web-tools and materials go hand in hand with our ongoing organizing and advocacy work. Find out more at 596acres.org.