The Tale of Two Sharing Cities, Part One - Shareable
Skip to content 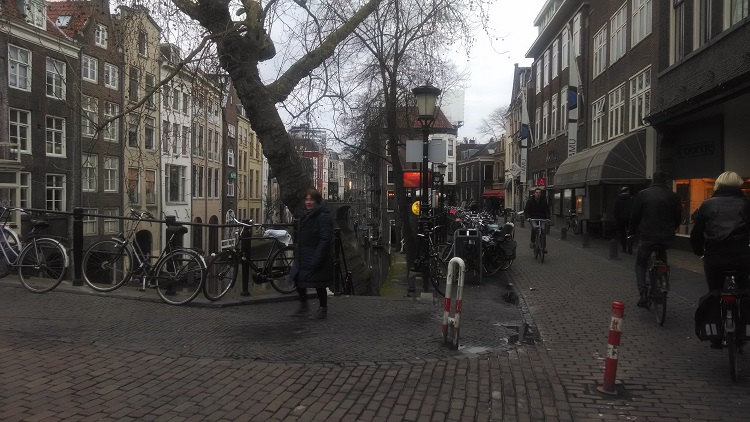 There’s something telling in the handlebars of old Dutch bicycles. They jut out a bit from the stem, then curve sharply back to meet the hands of a relaxed, upright rider.

When walking in the old district of Utrecht this past February, a gaggle of riders whizzed by me four abreast on this narrow, cobbled lane. They were nearly shoulder-to-shoulder.

This would be impossible with the wide handlebars of today’s mountain bikes. The Dutch handle bars said to me, "We go separately and we go together."

Indeed, the centuries-old canals that many a bike path run parallel to tell a similar tale, and they’ve made all the difference for the Dutch.

In fact, the canals are arguably the main protagonist in the new book, Amsterdam: A History of the World’s Most Liberal City, by Russell Shorto. The canals shaped Dutch culture in a profound way for, unlike the rest of feudal Europe, the canals fostered both a strong sense of individuality and collectivity.

As the old saying goes, “God created the earth, but the Dutch created the Netherlands.” While the European masses were serfs in the feudal system, land ownership was relatively common in the low countries. That’s because much of the land was drained of the sea by ordinary people, and they owned what they drained.

But — and this is a big but — the Dutch had to work together, district by district, to keep their land from being reclaimed by the sea. The maintenance of their canal system, one of the Renaissance-era wonders of the world, was a sophisticated, social process that engaged broad swathes of Dutch society.

This foundation of individuality and collectivity in Dutch culture spurred the development of many hallmarks of modernity — including multinational corporations, tolerance of diversity, stock markets, separation of church and state, and the single family home — which, for me, drive home the complex relationship between the commons and the market.

I received this insightful book as a gift from Harmen van Sprang and Pieter van de Glind of ShareNL, the Dutch sharing movement group in Amsterdam, after a meeting about sharing cities in the Beurs van Berlage, the old stock market building that sits between Dam square and the old port of Amsterdam, a spot with an incredibly rich history, one that shaped the world in ways which far outstrip even the occasionally extravagant ambitions of its inhabitants.

But what brought me to this meeting at a potent crossroads of old and new, and of the commons and the market, a meeting loaded with symbolic meaning for me?

The stubborn Dutchman, Ronald van den Hoff, author of the just released Society 3.0, CEO of Seats2Meet, and Shareable sponsor insisted I come, and then out of nothing his team created a four-city speaking tour for us both.

And it was that “nothing” he wanted me to experience firsthand. I have an uneven record of responding to the call of destiny, but this time I listened. I’m glad I did because his team has cracked the code on how to offer something extremely valuable — prime commercial real estate — to the public for free and still make money.

It might be too much to say that their model is of similar importance as the Dutch innovations that helped set the stage for Society 2.0 — industrial civilization — centuries earlier. But, maybe not, because they’ve put the commons and market in useful harmony in one of the most hardened domains of the material realm — real estate — something I’ve only seen done as cleanly in open source software and other digital commons. But this is only half the story.

The lights went on for me when, on my second day in the Netherlands, Ronald and I stopped at the reception area of their flagship Seats2Meet location in Utrecht above the main train station, the geographic center of the country. Just to the right of the reception desk was a huge flat screen display at eye-level showing everyone who was in the space at that moment and their expertise. Ronald explained that anyone could cowork for free in Seats2Meet spaces as long as they agreed to do one thing — help other coworkers. And that anyone can see who is in this and 70 other Seats2Meets locations in real time, go to where the needed expert is working at the moment, and get help. 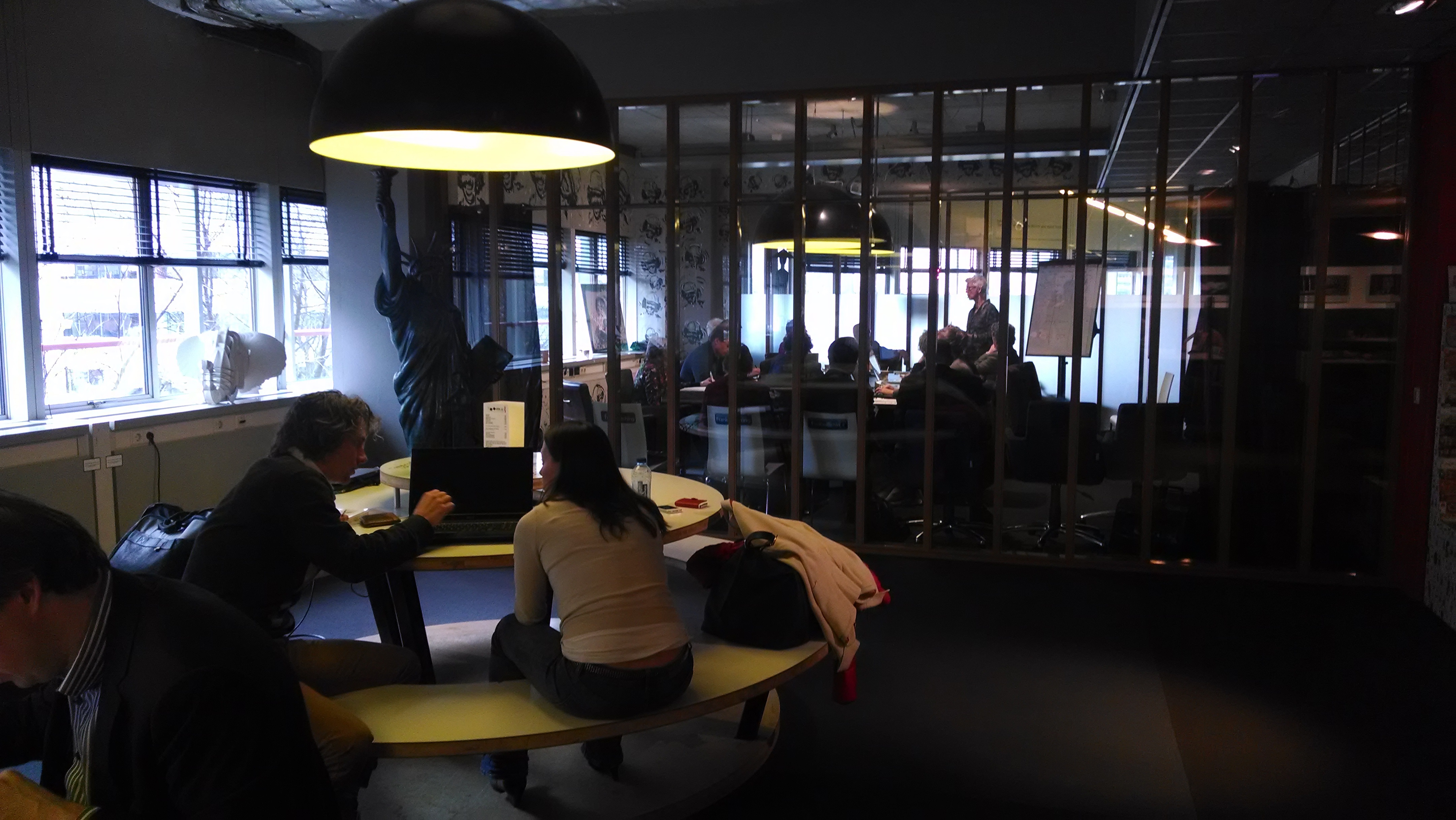 I stood there just staring at the screen. I let this sink in. I actually found it hard to believe. And, at this point, you might be asking, what’s the catch? As I was to learn, there’s no catch. Just free workspace, coffee, wifi, and also, famously, free lunch every day. 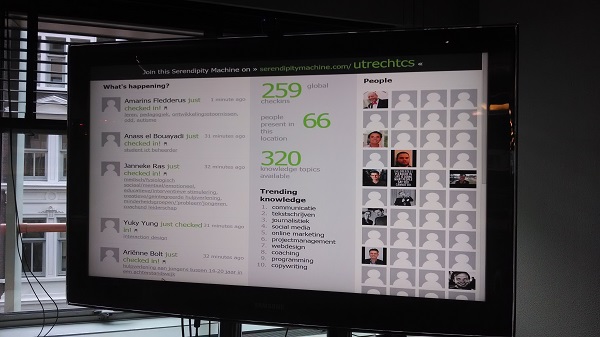 The way Seats2Meets thrives on free coworking is two-fold. First, their platform offers coworkers the chance to book a variety of private meeting rooms adjacent to the free coworking spaces for a fee. Second, their 70,000 users contribute valuable services to Seats2meet at no cost. For instance, Seats2Meet does no advertising. They rely on user social media exclusively. And they find willing volunteers to meet other Seats2Meet business needs.

This formula gives Seats2Meet significant top- and bottom-line advantages. They’ve achieved 90 percent occupancy of their private meeting spaces at undiscounted rates and they run a large value network with a small full-time staff.

And later I realized that this is how Ronald was able to set up a four-city speaking tour with all the trimmings — food, beverage, video, and press — without seeming to break a sweat. When I finally understood how Seats2Meet operates, one thought seized my imagination: This is the future I want to live in.

After Ronald's and my talk at the Beurs van Berlage, I had dinner with Nils Roemen, who is starting a Dutch print magazine about the sharing lifestyle. We had a great conversation with many points of connection. Nils could be my Dutch doppelganger — similar first name, same mid-career change to sharing, and an active sharing evangelist — though he seems to have taken things a step or two further, which inspired me. He’s famous in the Netherlands for the movement and hashtag #DareToAsk (#durftevragen in Dutch), which challenges people to ask for what they need, no matter how outrageous.

My talk about sharing cities following Ronald, a hard act to follow.

His leadership in sharing began with his experiences making beautiful tables from donated scraps of wood collected door-to-door, and then building a whole house on the same gift principle. He also helped start a long-running community space this way, which incubated scores of similar gift-powered community projects. He now consults and speaks based on his experiences, but there’s no price tag on his services. He merely asks his clients to pay him what they think he’s worth after he’s done. And it works. Needless to say, he’s the perfect person to start a magazine about sharing.

On my last day of the tour, Ronald and I had two speaking gigs, one in the Amersfoort and the last talk in Eindhoven, both in Seats2Meet locations.

While talks are always exciting, the highlight for me was the two-hour drive south with Ronald from Amersfoort to Eindhoven. We got some uninterrupted time to get to know each other. I learned that Ronald is a hospitality industry veteran who graduated from a top European hotel school, and that the hospitality ethos, which is all about creating great experiences for guests, pervades everything he does. I also began to understand how important this was to the success of Seats2meet, for nowhere do freelancers get treated so well, and how important this ethos could be in a peer-to-peer society where everyone is a host. I had long had a hunch about this, but here was someone who had lived the hospitality ethos professionally for decades and put it in the very DNA of a 70,000-person value network. This resonated with me. I just think we should treat each other well, like our lives depended on it, because indeed it does.

Not surprisingly then, the tour ended with a celebratory dinner hosted by Seats2Meet’s leadership team, Ronald, Marielle Sijgers, and Vincent Ariens, and their partners Thekla, Gideon, and Sanna, respectively. We were joined by Felix Lepoutre and other Seats2Meets operators in the center of Eindhoven just as the first night of Carnaval was ramping up. They reserved three tables in a local restaurant leaving one seat at each table empty so friends could hop table to table, a perfect shareable move in my book. The wine and conversation flowed. It was a celebration. The speaking tour was successful and, after our sumptuous dinner, we continued celebrating at a nearby bar with a crush of costumed Carnaval celebrants. It was the perfect opportunity to blow off some steam after a long, yet rewarding week of travel, meetings, and talks. And I did. 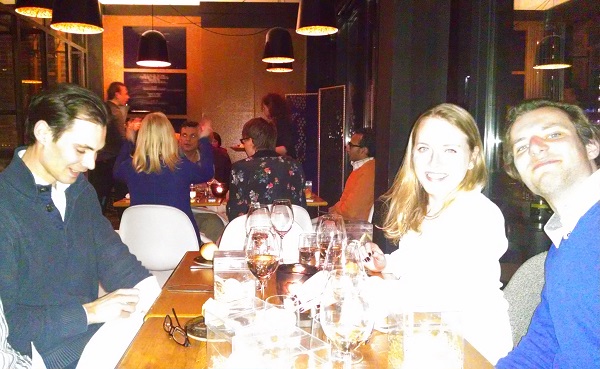 Dinner with the Seats2Meets crew in Eindhoven. Photo: Neal Gorenflo

After a great sleep at Marius Torenga’s (an Airbnb superhost gone rogue on Facebook, highly recommended) flat back in Amsterdam the following night, I left the Netherlands inspired. I had been exploring the sharing world for nearly 10 years, and came away thinking that I had only scratched the surface. Gems of the sharing world are everywhere if we dare to look. We have so much to learn from our fellow sharers around the world. That’s exactly the inspiration behind Shareable’s recently launched Sharing Cities Network.

Next up: Seoul, South Korea.