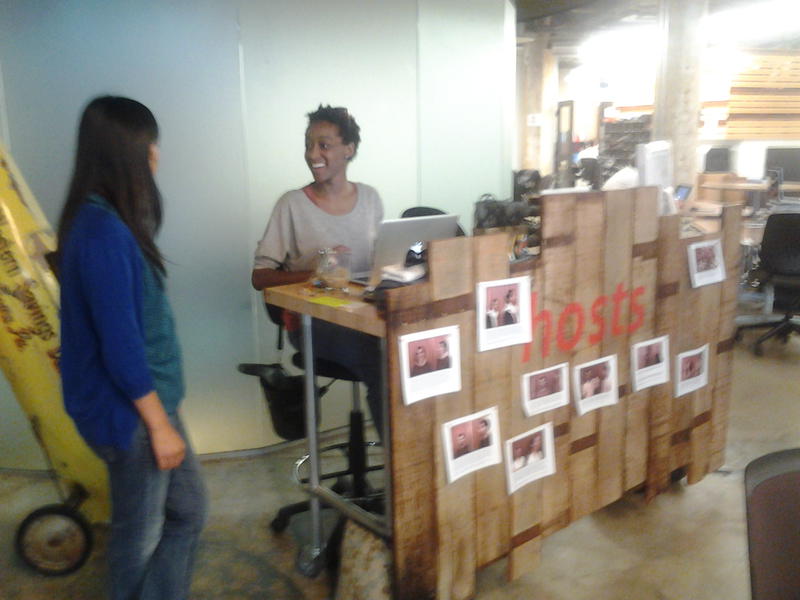 I coworked yesterday at Hub SoMa, my coworking homebase in San Francisco where Shareable is a member. When I arrived around 2pm, I didn't feel like just plopping down and opening my laptop. I did a lap around the bottom and then top floor to take in the space and see who was there.

I bumped into Cory Smith, the CEO of Hub Bay Area, by the spiral staircase. He asked me to come with him, he had something for me. I followed Cory upstairs to his office where he gave me the stamp in the below photo. It says, "This once belonged to: ________." Some cool soul at The Hub gave it to him, and he asked for an extra so he could give me one. That was so thoughtful of Cory. And it was an amazing coincidence too because the week prior my colleague Milicent Johnson and I talked about hosting a swap at The Hub. We thought it would be cool if every item had a little story to go with it. The stamp fit perfectly into that scheme. Serendipity moment number one.

I then went downstairs to talk to Roe Cummings, who was at the host desk. I've known Roe since before the space opened through Shareable advisor David Hodgson. I just wanted to check in. As is my habit, I asked her what cool stuff was happening at The Hub. She paused, and then said that hub hosts from around the world were gathering in Milan next week to discuss coworking hosting best practices. I asked her if she'd share the notes from the meeting, and if it was OK to write a coworking hosting how-to based on them. She said sure. I was stoked because I hadn't seen a hosting how-to on the web yet, and hosting is an important dimension of coworking. It would make a cool story for Shareable. Thanks Roe! Serendipity moment number two.

Feeling uplifted from the gifts of a stamp and story, I sat down to work. I happened to sit next to a group discussion led by Bobby Fishkin. The day before he had sent me a fascinating concept paper for an innovation zone in San Francisco. That's what he was talking about. I couldn't help but follow along, and I accidentally got a full briefing. To top it off, I was going on a group hike in the Presidio after work that Bobby organized. Dreading the long uphill bike ride to the Presidio, I asked Bobby for a lift. He said he had one spot left in his car. Thank goodness for Bobby, that's a hell of bike ride. That makes three moments – a serendipity hat-trick.

This happened in a span of about 20 minutes. Such is the serendipity of coworking.