The Cooking, Eating, and Business of Shared Food - Shareable
Skip to content 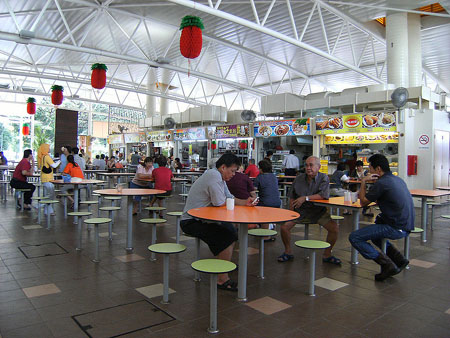 For conscious eaters, the dinner table is composed of thoughtfully sourced ingredients – local, organic, sustainable, etc. However, for many of us, quality food isn’t enough. Today, the chairs around the table and the people, often strangers, who fill them are equally concerned about the integrity of the food’s path to the plate and the community built upon that plate.

Growing and producing food – from cooking it and consuming it to making a profit from it – have become collaborative in unprecedented and innovative milestones. Eating has become a political/conceptual – even, dare I say it, socialist! – act delving deeply into peer-production and egalitarian, off-the-grid practices in labor and profit.

Food eaters everywhere are beginning to question and transform the meaning of a commercial kitchen space and the elasticity of a restaurants’ four walls. Demand for quality, sustainable ingredients on the table has transformed they way we’ve thought about food for the past few decades. And now, food eaters and culinary thinkers alike are growing increasingly more concerned with the issues and circumstances surrounding their food’s production, distribution, preparation, and consumption. 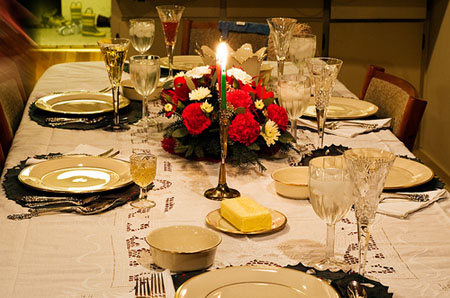 Communal Food Production
Why toil behind a hot stove alone? While collaborative cooking has gone the way of the farmhouse in recent decades, urbanites have once again realized the benefits of cooking together for communal benefit. With the elevated interested in canning produce, jams, and even trotters and anchovies, canning instructor Anya Feral organized Yes We Can, a group of newbie canners banded together buying directly from local farmers and learning to put food by. Participants from the canning club walk away with finished cases of canned produce to enjoy beyond the season, and a new skill to practice at home to stock their own pantry.

But one cannot live on canned peaches alone. Why not take the group production model and create a whole meal? Three Stone Hearth in Berkeley, Calif. is one of many Community Supported Kitchens (CSKs) to sprout in recent years, along with Salt, Fire & Time in Portland, Ore. and Local Sprouts in Portland, Maine, among others in development in Chicago and elsewhere. Just as the CSA (Community Supported Agriculture) was a boon to farmers who sold “shares” of their harvest to regular members no matter what the yield, CSKs also seek membership to keep the kitchen fires burning. Members pay in advance to receive regular installments of slow-cooked broths, fermented pickles, hearty whole grain salads, and much more, all of which stems from local agriculturists and producers, some of which relies on member-volunteers to prepare or deliver it.

If any of this is too much commitment for you, why not simply host a picnic, invite a few strangers to a local park, and agree to share the food that you’ve brought on a sunny Sunday afternoon? Such are the concepts of Grubly in San Francisco, California and EatWithMe in Melbourne, Australia. Participants use the websites to organize a food-centric social events to meet, converse, and dip a chip or two into a neighbor’s salsa.

For the less crunchy set, get-together cook-togethers are also on-trend, and commercial enterprises such as the burgeoning Dream Dinners are on the rise nationwide. Participants gather at one of the enterprise's dozens of locations and assemble family meals for the week from pre-selected recipes and pre-chopped ingredients. The atmosphere is nearly club-like with music and snacks provided; attendees simply grab a container and start packing their meals for the week. 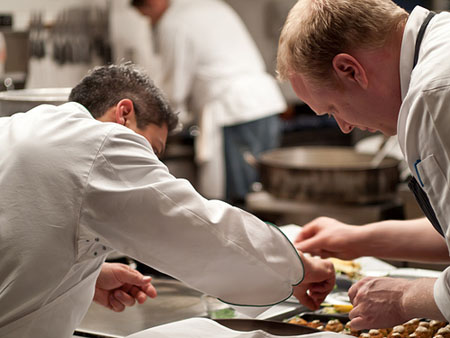 Swapping Together
Surely all of this food production has made you hungry. But there’s never a need to eat alone when there are so many shared plates, shared tables, and newfangled twists on potlucks to devour.

If the suburban vibe of Dream Dinners isn’t your thing, why not DIY in your own kitchen? Consider the model of Australia’s MamaBake, where mamas gather in home kitchens, make a mass of grub in tandem, and then swap ready-to-eat meals after a splendid afternoon collaborating in the kitchen. Or, Cook Here and Now in San Francisco, Austin, and Melbourne goes upscale of the casserole and focuses instead on producing one excellent meal from many hands. This effort of random participants is a collaborative cooking club that shares a large, rented, commercial kitchen. Cooks/diners bring all of their own equipment and ingredients (Don’t forget the wine!), prep an excellent food lover’s meal, and then sit down and enjoy it around a very large table together. Take the notions of soggy potluck pasta salad and throw it to the curb.

Wanna trade your PB&J for my tuna salad? The concept of the swap has homemade foodstuffs flying off of our own pantry shelves. From soup to complete dinners for two, baby food (hosted by yours truly) to jars of pickles, the proliferation of the food swap has us feeding one another in abundance. A great hub of these happenings occurs at 18 Reasons, a food-centric arts and community center in the heart of San Francisco, where food eaters trade everything from pureed carrots to BPA-free quarts of mulligatawny. And the homemade food swaps of L.A., Oakland, Portland, Austin, Louisville, etc. will allow those with too much quince chutney to broker a deal with their neighbors shelving too much arugula from their garden, homemade English muffins, infused lemon vodka, or homemade salsa. In this culinary dating game, every pot finds its lid.

Collaborative Food Business
Meeting your neighbors is all well and good, but it’s also possible to turn a profit in the new ethics and economy of eating together. It used to be that restaurateurs set out the checkered table cloth and a shingle, and a neighborhood eatery was born. But, alas, a slumped economy, an interest in DIY cooking, and a rise in supporting the independent entrepreneur have given rise to a number of restaurant alternatives that alleviate hefty start-up costs and have food sleuths trekking all over the urban landscape for a great bowl of curry, an astounding Korean taco, a truly homemade pastrami sandwich, or exploring the previously uncharted waters of “gobs”. 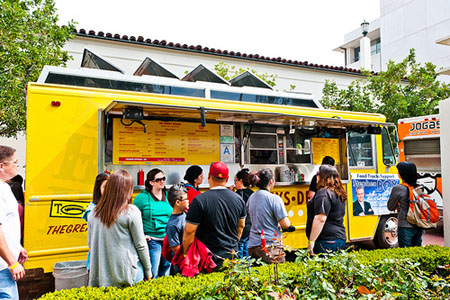 The mid-2000s gave rise to the food cart, a long-standing staple of Asian street food life that has at last caught on in America’s food-forward cities (San Francisco, Los Angeles, Chicago, and New York). Food is fast, cheap, cooked fresh, and, more often than not, delicious. And, of course, the initial business investments of a mobile food vehicle are a fraction of what it would cost to open a traditional restaurant, allowing a more egalitarian spectrum of aspiring chefs to stand at the stove. What’s more, food carts buoy one another for their success, collaborating to stage makeshift marketplaces of a half-dozen vendors of more, giving diners that mall food courts sensation of diversity, variety, and value.

The small-scale food producer has come of age in other ways, too. Much as artists and craftspeople have enjoyed a co-operative retail model to sell paintings, hand-painted t-shirts, and jewelry, food producers, such as those behind San Francisco’s 311 Cortland, have joined forces and shared the financial risk to operate a small food co-op market of handmade artisan goods. Cookie and cupcake makers, snack chip masters, jammers, picklers, et al also learn to sell their wares through communal commercial kitchen spaces like La Cocina (offering regular classes, marketplace events, and small business operations training), and more under-the-law venues like the periodic Underground Farmers' Market, a flea market of homemade and handmade edibles both jarred (grapefruit and tarragon jam) and ready-to-eat (barbecued pork shoulder on homemade brioche bun). Even home cooks are getting in on the action. In Paris, web hub SuperMarmite allows those with extra portions of their home cooked dinner to connect to those locals who didn’t have time to cook. Rather than ordering restaurant take-out, participants can buy a serving of their neighbor’s cassoulet or stuffed pork chops. Operations such as this are win-win: You get dinner, and I get to play chef and enjoy some extra cash. Suddenly the line between chef and patron has completely blurred.

For those who wish to play chef on a larger scale (or for those who are actual chefs who only wish to be in the game temporarily), why not jump the pop-up restaurant bandwagon? Those who cook – chefs, caterers, or those who aspire to either – are renting out restaurants during off-peak times, crafting their own menu, producing their own food, and spearheading their own advertising in the hopes of bringing in enough diners to fuel their restaurant-ownership dreams for a night. Imagine an episode of Top Chef’s restaurant wars for fun and profit. And the benefits are manifold: existing restaurants make money on formerly dark nights; wannabe chefs have the benefit of a venue and restaurant ownership without commitment; and diners in-the-know get to enjoy experimental eats and bragging rights to have tasted what’s new and now. In San Francisco, the concept has spread like wildfire, launching The Corner, a well-located, all-pop-up venue with a revolving chef roster in the city’s bustling Mission District.

What else is popping up in the world of collaborative eating? We can only guess. But surely it will continue to feed our growing desire to bring our ethics, our experiments, and our demands for food quality as well as cohesiveness to the table… and to challenge the meaning of what a truly shared table really is.

Karen Solomon is the author of Jam It, Pickle It, Cure It (Ten Speed Press, 2009) and The Cheap Bastardâ€™s Guide to San Francisco (Globe Pequot Press, 2007), among other

Karen Solomon is the author of Jam It, Pickle It, Cure It (Ten Speed Press, 2009) and The Cheap Bastardâ€™s Guide to San Francisco (Globe Pequot Press, 2007), among other books. Her edible musings on the restaurant scene, sustainable food programs, culinary trends, food history, and recipe development have appeared in the San Francisco Chronicle, San Francisco Magazine, San Francisco Bay Guardian, Zagat Survey: San Francisco Bay Area Restaurants, Gayot San Francisco, and elsewhere, all of which showcase the diversity of her word-wrangling plate.