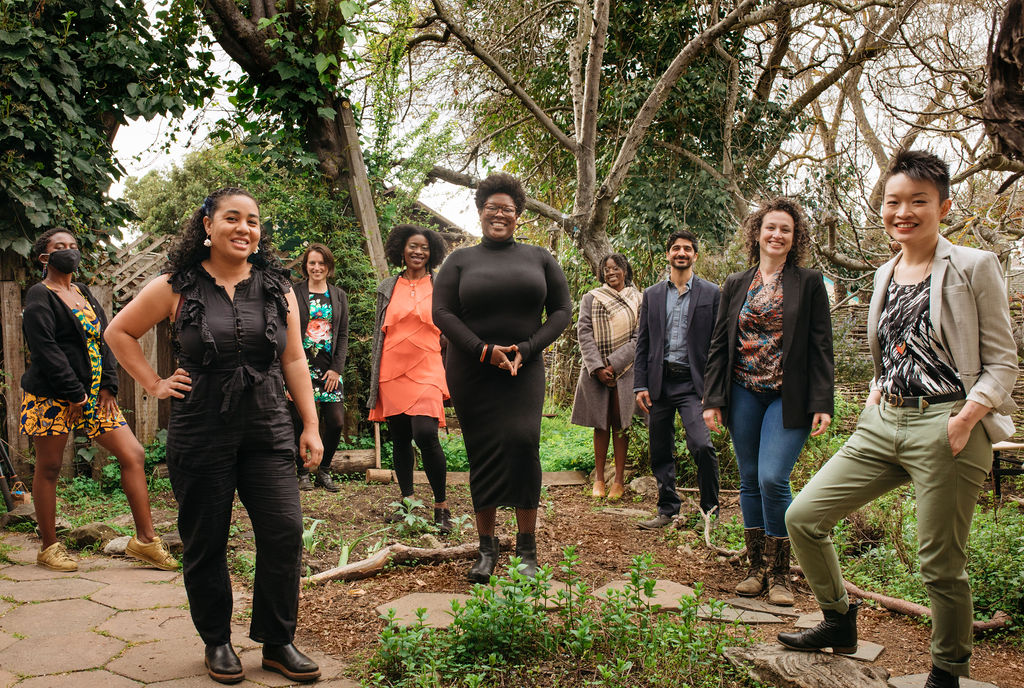 The 7th Street corridor in Oakland, California, was once a two-mile strip known as the “Harlem of the West” — home to a myriad of businesses, dry cleaners, cobblers, tax accountants, cafes, restaurants, and 250,000 Black residents.

Decades of redlining, structural and environmental racism, widespread resource extractions, and the Silicon Valley technology-fueled economic boom have reduced it to “eleven blocks of liquor stores, trash, and empty, defunct buildings,” according to Noni Session.

Session, a third-generation Oaklander, is the director of the East Bay Permanent Real Estate Cooperative, an organization incorporated in 2017 that uses co-op organizing to directly confront the skyrocketing home and rental prices, neighborhood displacements, and entrenched income inequality, that disproportionately affect Black and brown communities around the East Bay.

“As the population and diversity in Oakland was exploding,” she said, “what was contracting was the Black and brown presence in these new economic and social spatial configurations. Black and brown folk were not being housed. They weren’t being employed. There was no real political or legal holding container for them to accumulate wealth and assets.”

The East Bay Permanent Real Estate Cooperative is a multi-stakeholder cooperative with four types of members: staff collective owners; resident-owners who live in properties purchased by the cooperative; community owners who oversee projects and ensure accountability, guidance, and transparency; and investor-owners who buy one or more $1,000 shares with a projected 1.5 percent return after five years.

Session refers to money received from the group’s investors as “justice dollars” — and acknowledges that the 1.5 percent return on investment is no match for the 7 percent annual return of traditional investments.

But a big return is not the point.

“Our investors support transformation and community,” Session said. “They support helping people who have traditionally been barred from acquiring wealth and assets through land and property ownership. They support helping Black and Brown people decide on their own futures.”

Getting the 7th Street corridor back in orbit

The cooperative was incorporated in 2017 after advocacy and action by local social-justice groups. Four years later, the cooperative has closed on the Esther’s Orbit Room Cultural Revival Project, its third land and property acquisition, and a major growth opportunity.

Centered on a shuttered blues and jazz club, located at 1724-7th Street near the West Oakland Bay Area Rapid Transit (BART) station, the cooperative’s goal is to transform the space into a vibrant cultural center, business district, and living space.

Esther’s began as a popular breakfast spot in 1950 before expanding in 1963 to become a music venue that once featured entertainers such as Tina Turner, B.B. King, Lou Rawls, Al Green, Z.Z. Hill, and Etta James.

The club persisted through the displacement of neighborhoods and businesses due to multiple construction projects for highways, a post office, and the BART station, Esther’s remained a community stalwart until closing in 2011. In its heyday, Esther’s was just one of the diamonds dotting West Oakland’s historic 7th Street Corridor.

Today, the real-estate cooperative’s community, investor and staff owners hope that their project will help restore the district’s vitality, necessity, and cultural glory.

Esther’s is a multi-use, two-level  building with 5000 square feet on each floor. As a revitalization project, it offers  many possibilities for co-operative ventures to support a wide array of people there.

The upper level, Session said, will house approximately eight artists-resident owners. Between three to five commercial spaces may be created on the ground level.

“For us that doesn’t mean three to five cooperative owners. It takes multiple people to run a business. Our mission demands that the running of that business is equitable, so there could be anywhere from one to ten people involved in each commercial space — co-operators, co-managers,” she said.

Our mission demands that the running of that business is equitable, so there could be anywhere from one to ten people involved in each commercial space — co-operators, co-managers. — EB PREC Executive Director, Noni Session

“There’s a café potentially in the middle that may have wait staff with collaborative powers,” she added. “There’s a kitchen that could be for one or for multiple operators to use at different times of the day. The bar and music venue can be run collaboratively since it’s meant for performers.”

Session said the project will prioritize help build community and offer sorely needed local services to the 50,000 people who live around the 7th Street Census tract.

The location also sees an additional 350,00 commuters pass through it every day, en route to and from San Jose, Silicon Valley, the North Bay, and San Francisco, who can stop to shop, conduct business, or interact, once the project is operational.

Another $400,000 will be raised to seed and launch small businesses at the project site.

Past successes — and plans for the future

“Our goal is to take on as many ownership situations as possible,” Session said. “We shoot for three acquisitions a year, so we can support as many groups in attaining space and permanence in Oakland and the East Bay as possible given the conditions of the real estate market.”

This includes, she said, reviving multiple corridors, using the Esther’s Orbit Room project along the 7th Street Corridor as a model.

“We want to use this capital to revive districts and revive cultural framework and revive connections and revive neighbors and the neighborhood,” Session said.

The East Bay Permanent Real Estate Cooperative so far has two other properties — a four-unit apartment building that its residents purchased and converted under a collective ownership arrangement in 201; and a Berkeley based, four-bedroom single family home with a detached dance studio, which was donated to the group.

Together, the two properties house eleven resident-owners who make shared lease payments based on the property’s mortgage, taxes, upkeep, and other incidentals.

The good news, according to Session, is that unlike people who rent, resident owners get to pay down their cost of the project, so their lease payments lower over time.

Resident-owners also have decision-making powers over the property, which is co-managed by Session’s organization. Together, they decide on acquisitions, repairs, improvements, maintenance, and emergencies.

Resident-owners can never be evicted, and the real-estate cooperative consistently looks for ways to boost their share in economic power and equity, according to Session.

Still, as with anything in life, the cooperative is not immune to certain challenges.

“There is a cost for being a market actor,” Session said. “To access the capital that allows us to remain competitive means finding capital that is 60 percent cheaper than what the commercial developers sources are. These justice dollars are not as plentiful as venture capital dollars.”

Yet the successes of her organization are real, and are helping rebuild small, local economies in Oakland, where Black and brown communities are included in all processes from the ground up.

Check out these related articles & resources: