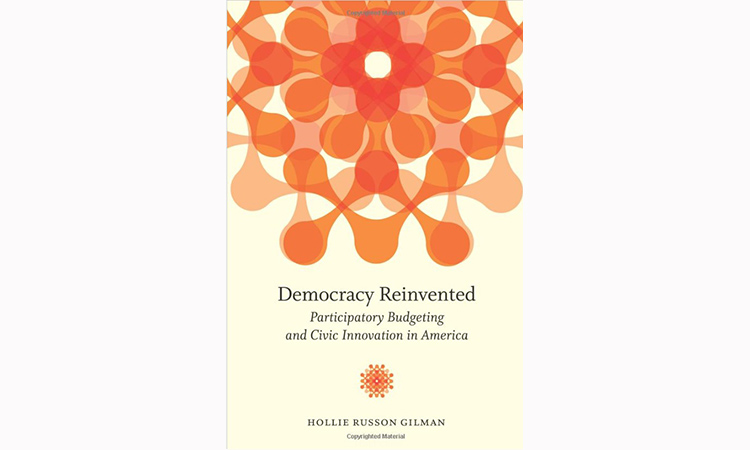 As Americans have become more disconnected from their communities, loneliness and social isolation have climbed. Research shows loneliness is linked to early mortality. Given that one in 11 Americans over 50 lives without a spouse, partner or child, this kind of social disconnection is a serious public health concern.

One way to reconnect people is to get them directly involved in civic projects that encourage discussion, debate, and collaboration — everything from civic technology to open government and community renewal projects. These kinds of innovations “present an opportunity for democratic deepening that strengthens communities and rebuilds civic muscles,” says Hollie Russon Gilman, a Political Reform program fellow at New America, a Washington, D.C.-based non-partisan think tank. One such intervention Gilman has studied is participatory budgeting, a process by which community members decide how to spend part of a real public budget. “It gives people real power over real money,” the Participatory Budgeting Project explains. The budgeting process can increase rates of engagement because it prompts community participation and collaboration between people and governments. While reducing loneliness isn’t its stated purpose, it is a great side effect.

To learn more, Shareable spoke with Gilman, a professor at Columbia University School of International and Public Affairs and a fellow at Georgetown’s Beeck Center for Social Impact and Innovation. Her first book, Democracy Reinvented: Participatory Budgeting and Civic Innovation and America takes an in-depth look at this innovative approach to governance.

Jen Boynton: Let’s talk about the current state of civic participation. Are we in a good place in our society?

Hollie Russon Gilman: When you look on the national scale, we know that people feel disillusioned with government. They feel like it doesn’t work for them. [But] there’s a lot of bottom-up energy and a lot of people in their communities working together every day to solve problems. There’s a lot of energy and excitement also in city halls around the country. The big question is, can we capitalize on that and can it really empower people in a structural way?

It’s interesting that you see the disillusionment as an opportunity because this series looks at the challenges of loneliness and social isolation in society.

It is the optimistic way of looking at it, but the loneliness question is a big challenge too. It’s a real thing that we have to grapple with as a society. We have to think about the ways in which technology really atomizes individuals. It connects people but also makes them more isolated. And then questions around digital equity, access, digital design, digital literacy, only then get exacerbated. So it’s kind of one branch of the question.

The second branch is how do you engage people in a meaningful way, so they’re doing things that are not just lip service, and then that can create civic rewards and strengthen social capital in a way that has positive benefits for people who feel isolated and lonely because they’re making these new connections with their communities, their neighbors, their elected officials.

People think of governments as a service provider that doesn’t necessarily respond to local feedback very quickly. You look at it a little differently in your book.

The book is about the rise in participatory budgeting. The movement started in Porto Alegre, Brazil in 1989, and then it moved all across the globe, from Africa to Europe to the Middle East. It came to the United States in 2009. It’s a process where people in their communities work together, often with government officials, to come up with viable budget proposals that are then turned back to the community for a broader vote. And then those proposals are actually enacted into policy by public officials.

So the book looks at what this class of innovations could mean in the United States and how to think about other local-level innovations that are occurring, and how to tap into that energy.

Boston [had] the first youth group in participatory budgeting, putting a million dollars aside for people aged 12 to 25. Seattle did a youth version of participatory budgeting. When you go and you talk to the kids that are at the meetings, they come for the pizza, but then they stay because they realize that they’re really given decision-making. It’s really powerful.

They actually execute a project that they care about for their community.

People are looking to them in a new way. Sometimes they talk about things that maybe aren’t the same as the adults in the room would prioritize. At one event, youth violence was a key topic. That was not something I would have thought would be a priority, but in this community that was the issue that people felt they were really affected by.

What is it about participatory budgeting that allowed that information about citizen priorities to flow where it might not have otherwise flowed?

Process really matters. This is one of the things that we don’t often think about when we engage people, but if you talk to any organizer, the people who work on campaigns, they all understand this intuitively. Participatory budgeting really is a process that works to lead people from a to b to c, so that they’re informed but they’re also empowered. They’re not just randomly telling people, okay here’s an apple, now make an apple pie. You’re walking people through a process that begins with people identifying needs in their communities. There’s a set of parameters. Here’s what’s in and here’s what’s out.

Community members work in tandem with public officials who are also volunteering their time, to show people how to actually create budget proposals that are viable and teach people how much things cost, how things get done. Then those projects which are vetted and are realistic and viable are put back to the community for wider vote. What’s really exciting about participatory budgeting is that typically disenfranchised communities are empowered to vote. Non-citizens, recently incarcerated people, younger people.

What is the key to success with a project like this?

Where it’s been most successful, there’s been a strong grassroots organizing partner. In New York City, Community Voices Heard has been the grassroots lead. That group traditionally organizes low income women of color, many of whom are in public housing. There’s been a real push for equitable and more inclusive participation in participatory budgeting than traditional voting. That’s another really exciting opportunity to say, let’s reduce the barrier to entry. In New York, they even have online voting [for these budgeting proposals]. Voting is open for many days, unlike our regular voting process.

In Brazil and other places the vote has been this really fun thing: a carnival atmosphere. We can be more creative with how we think about voting and democracy.

Jen Boynton is CEO of B Targeted Marketing Co. which does marketing and communications for values-based businesses. Prior to B Targeted, Jen co-founded and spent a decade building TriplePundit, a

Jen Boynton is CEO of B Targeted Marketing Co. which does marketing and communications for values-based businesses. Prior to B Targeted, Jen co-founded and spent a decade building TriplePundit, a leading website for news about sustainability in business. In this role she traveled the globe reporting on sustainability and created content campaigns for clients like Salesforce, Symantec, Procter + Gamble, Whirlpool, MGM, CVS Health, Deloitte, Cisco and many more. TriplePundit was acquired in 2017. Jen holds an MBA in sustainable business from the Presidio Graduate School and lives in sunny San Diego with her husband and daughters.