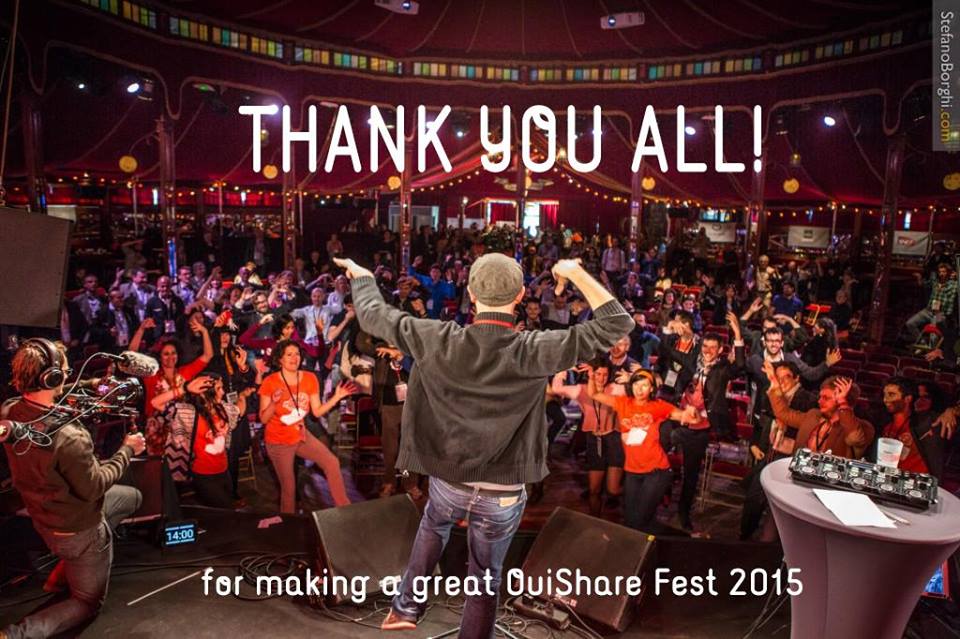 The third annual OuiShare Fest, hosted with the theme “Lost in Transition” in Paris’ charming Cabaret Sauvage, concluded last Friday. This unique gathering of sharing economy leaders from around the world found itself in at least two ways with their latest edition.

First, the theme brought the elephant in everybody’s room to the fore – the gaping contradiction between the utopian possibilities and the hyper-capitalist realities of the sharing economy. The key dilemma that OuiShare Fest underscored is that while leading platforms like Airbnb and Uber help users create value on an unprecedented scale, they do not share ownership and governance with users and could in fact exacerbate already severe inequalities. OuiShare Fest’s programming, which is largely crowdsourced, reflected a widely held belief that platforms should share ownership and governance with those most responsible for their success — users.

In fact, Nick Grossman’s keynote, “Venture Capital vs. Community Capital,” was OuiShare Fest in a nutshell. He elegantly articulated the contradiction and put forward the blockchain as a key solution. As Nathan Schneider pointed out last December in his Shareable feature story, “Owning is the New Sharing,” criticism of the sharing economy has catalyzed a counter-movement to create democratic sharing economy platforms. With Nick’s help, the blockchain had its coming out party at OuiShare Fest as the people-power solution to the sharing economy’s contradictions. Everybody was talking about the blockchain from keynotes to side conversations.

Whether or not the blockchain will live up to these expectations is another question. I have my doubts as it doesn’t build durable social relations necessary for communities to go on a new, long-term commons-based developmental path. Blockchain platforms are thin, and so are the social ties. There are no shortcuts, technological or otherwise, to social change. Social change is social, and social takes time. But there’s hope, as Swarm shared its recently released Distributed Collaborative Organization at the fest, a format that combines blockchain and human management of enterprises.

The second way OuiShare Fest found itself is that it seems all grown up in its third year. Things ran more smoothly, it was amply staffed with volunteers, it had all the trimmings of a professionally run conference, yet its organization reflected OuiShare’s values. With OuiShare Fest, OuiShare the organization talks the collaboration talk and walks the collaboration walk, a rare accomplishment. The fest is run in a largely decentralized fashion.

That said, I did come away with the impression that OuiShare Fest's format and audience may be mismatched. As CrowdCompanies’ founder Jeremiah Owyang commented on Facebook, OuiShare Fest is a community of insiders, meaning it convenes the actors within the sharing economy, not the general public. To mature further, OuiShare Fest may need to create a better balance between keynotes and collaboration. FAB10, the gathering of FabLab leaders, might be a model to emulate. It’s really two events — a symposium for insiders and a festival for the public.

This model would make more sense for us at Shareable. As someone who reads about the sharing economy nearly every day, I didn’t learn much from the formal programming. It would have been great for newbies, however. OuiShare Fest would be more useful to us as an opportunity to convene stakeholders in the Sharing Cities Network. While I was delighted to give an update to a packed house on sharing cities with Nils Roemen of Sharing City Nijmegen and Harmen van Sprung of Sharing City Amersterdam, the three of us would have preferred to use this rare time together to push our work forward. I heard similar things from other attendees.

Thankfully, none of this diluted the best part of OuiShare Fest, the community spirit that brings out the best in attendees. Simone Cicero of Sharitories described the OuiShare Fest as “TED hugs Burning Man.” Like Burning Man, the fest gives attendees the opportunity to try on a new way to be in the world and relate to others.

As such, I had many encounters that exemplified the spirit of sharing, generosity, and love at OuiShare Fest. For example, on day one, Julie Da Vara and Valentine Philipponneau of JeLoueMonCampingCar, a camper van sharing platform, gave me a box of canales, Bordeaux-style cupcakes that are sinfully delicious. Johanna Steuth of Wirfel gave me a compliment card with the inscription, “For your passion for commons, communities and creating places for sharing. I like to see you there!” Ronald van den Hoff, Marielle Sijgers, and Vincent Ariens of Seats2Meet treated a bunch of us including Jen Billock of Couchsurfing and Christian Iaione of LabGov to dinner at a classic Parisian café across from the opera house. My friends Laurel and Quitterie of BioHacking Safari invited me to a lovely dinner of modern Sicilian food at DJoon. Chelsea Rustrum of It’s a Shareable Life and I livened up things at Mangopay’s party by dragging everyone onto the dance floor. Entrepreneur Daniel Goldman treated me, Tom Llewellyn, Chelsea, Benita Matofska, and her team at People Who Share to late night karaoke. And at the conference-ending OuiShare Love party, David We and I went below the surface in a conversation that revealed a similar need to connect authentically with others. It was the perfect way to end the fest – feeling totally accepted for who I am and we are, warts and all, ready to take OuiShare love out into the world.