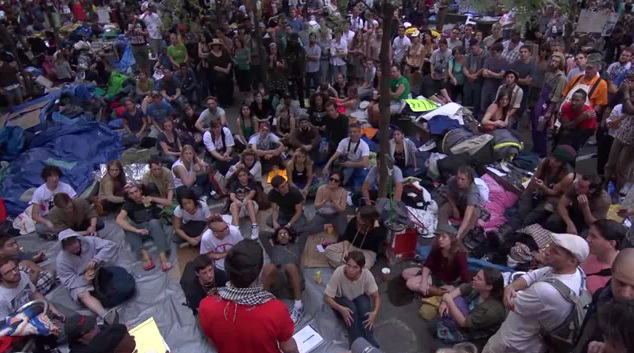 This mini-doc shows in some detail how the general assembly – the heart of the occupy movement – operates. They make decisions by consensus and anyone can join the assembly. Through this process, the occupy movement models its own radically inclusive political economy and thus demonstrates that it's more than a protest movement. It's many things, but what may be overlooked is that it's a social process through which people can experience being a fully heard citizen, and maybe for the first time. It gives an opening through which people can experience first hand what's possible when a diverse citizenry works together.

Whatever the outcome of the physical encampments within the movement, my hope is that Occupy Wall Street is a starting place from which citizens will go on to create the democratic institutions, enterprises, and laws we need to avert disaster and thrive as a global civilization in the 21st century. I hope that at least part of the movement will turn to the many democratic social and economic innovations we write about at Shareable and put down durable infrastructure for a stable and inclusive global society. The spirit and workings of the Occupy Wall Street General Assembly would likely be in the cultural DNA of such a transformation.