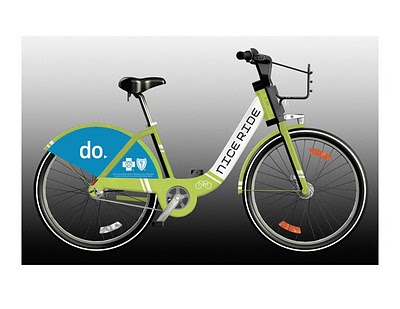 From the Bike-sharing Blog via Nice Ride Minnesota, more evidence of the growth of bikesharing systems globally. Note that some of the funding for the service comes from a large health insurance company:

Advanced bike-share systems have been operating in cities like and  for several years now. The engineers at BIXI learned from the successes in these cities and built a bike share system that is elegant, rugged, and simple to use. Time Magazine recognized BIXI as one of the top inventions of 2008, right behind the Mars Rover.

The BIXI system enables an annual subscriber to take a bike from any kiosk with the swipe of a card and return it to any kiosk by simply pushing it into a dock, which locks automatically. The solar-powered system creates accountability: subscribers sign a user agreement online and the system keeps track of who has each bike at all times. The bikes are designed for short trips in the city, such as across downtown for an appointment or a quick trip to a local market, which in turn reduces pollution and congestion. The bikes are designed to be ridden by people wearing regular clothes and include full fenders, lights and a cargo rack.

Nice Ride Minnesota’s Phase 1 plan calls for 1,000 bikes in 80 kiosks throughout downtown, the University of Minnesota Twin Cities campus and surrounding commercial districts. Nice Ride expects to have at least 65 of these kiosks in place when it launches ’ bike share in June 2010.

joins  and  in selecting the BIXI equipment as the best for an urban bike-share system. Nice Ride expects to finalize a contract with the PBSC very soon.

The primary funding sources for this purchase come from a Bike Walk Twin Cities (BWTC) grant and a Blue Cross and Blue Shield of Minnesota (Blue Cross) sponsorship using proceeds from its historic settlement with tobacco companies.

BWTC is a federally funded initiative to increase biking and walking and reduce driving in  and neighboring communities. A program of Transit for Livable Communities, BWTC allocates funds to local governments for safer crosswalks, bike lanes, and other improvements, and works with organizations, businesses and residents on public education about biking and walking options.

Blue Cross’ commitment to promoting prevention and wellness is evident in its anti-smoking campaigns and efforts to fight obesity. The bike-share program will help people to be active and move more making it a strong complement to the Blue Cross do campaign, which encourages everyone to “groove your body every day.” Each bike will display the do message.