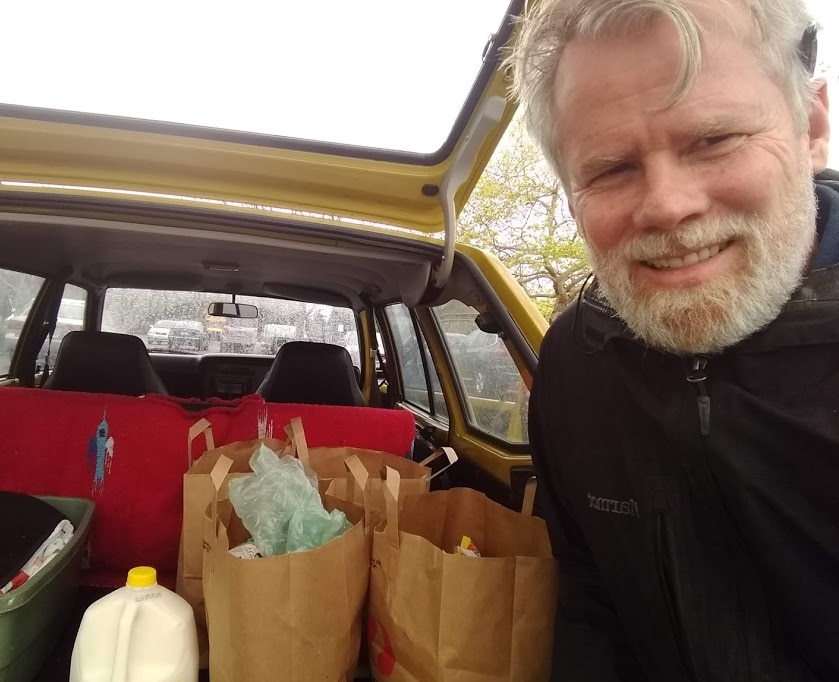 Delivering groceries to a neighbor.

It’s been just over a week since my last #LocalYear blog post, yet it feels like a lifetime ago. So much has changed, but at the same time the shelter in place order has slowed the pace of our daily life down to a crawl. In this dangerous yet fertile moment, a new world and way of life is emerging.

My path to a new pandemic routine has been uncertain to say the least. Take for instance my Cool Block project. I had recruited a group of neighbors to do the eight meeting climate action program, then the shelter in place order came. The support group for Cool Block leaders like me suggested that we pause our efforts until the order is lifted. While it was a reasonable suggestion, I didn’t want to pause at the crux of my organizing effort — an already scheduled in-person meeting where neighbors sign up to host the eight meetings.

As I explained in my last post, I pivoted to a virtual meeting focused on neighborhood mutual aid. At the end of that meeting, we scheduled another virtual check in two weeks later. I suggested that we decide next steps for Cool Block at this second virtual meeting.

At this point, I thought the Cool Block project would collapse under the weight of the crisis. I was pretty down about it. Much to my surprise, every household on the second check in call last week volunteered to host a Cool Block meeting. We scheduled the entire eight weeks too. We’re all set to go starting in May. I was blown away. I’m so grateful to my neighbors.

This put some wind in my sails. With inspiration from friends and family, I started thinking about my overall stance during the crisis. Would I just hunker down with my family and wait it out? Or was there a better way to face the crisis?

A way forward began to emerge from this moment of decision. First, I decided that this was no time to simply hunker down. It was crystal clear from my nearly obsessive news reading that we weren’t prepared as a society for this crisis and that there was huge unmet need as a result. It was time to help out. In fact, the need seemed so great that I felt wartime-like civilian mobilization was needed.

At work, I published a public service announcement urging Shareable readers to join what I called “The People’s COVID-19 Response.” This people’s response is a large, rapidly growing global movement of ordinary people helping to save lives and relieve suffering. I shared the many ways to join the effort including neighborhood-scale mutual aid, open source medical equipment projects, meals and lodging for front line medical workers, giving blood, volunteering, donating, and much more. The process of writing the article led me to ask myself, what could I do beyond helping neighbors?

I researched options in Mountain View. There was actually a lot I could do. I made a list and committed to at least one action per day. Later I added a twist — I’d post each daily action on social media. I donated canned goods to the local food bank. Got groceries for a neighbor. Donated to a friend’s nonprofit. Gave flour to a neighbor who had run out. Delivered a cake to a retired friend who was stuck at home on his birthday. I also signed up for the local mutual aid group that had just formed, one of countless thousands that have formed around the world. Hopefully, I can participate there too.

This was part one of my new pandemic routine. As I got into the groove, the benefits became clear:

This decision made me think about what I could do even more locally, like at home. I asked myself, how should we face this crisis as a family? This led to part two of my new pandemic routine.

My wife Andrea and I decided to reject the assumption that life begins again after the shelter in place order is lifted. We decided that this is our life and we’re going to make the most of it. As one example, last Sunday night we made a fancy meal out of a take out order from a local restaurant. We got dressed up, set a proper table, lit candles, made a floral centerpiece, opened a bottle of wine, and enjoyed a nice meal together. We did this while keeping in mind our good fortune. As I write this, I’m thinking about how we could do more as a family to make sure other families have food.

I also knew that ritual makes time habitable, so we needed new family rituals. I made a huge calendar for the next month on the wall next to our kitchen table using 8” x 11.5” sheets of paper, each sheet representing one day. Using colored markers, we started filling the calendar with things to look forward to. Friday nights are for take out and virtual happy hours. Saturday nights are movie nights. Next week is Shark Week on the Discovery Channel. My son Jake is looking forward to the release of Trolls 2 later in the month. We’re also looking for ways to make volunteering part of our family routine.

Creating this new routine is a work in progress, but this is a solid start. In fact, we talk about the calendar at dinner each night and think up new things to do. It helps that the calendar is huge and impossible to ignore.

I might be giving the impression that this was easy. It wasn’t. As I said, the path to my new pandemic routine was uncertain. There was also some fear, confusion, and anxiety along the way. I have my friends and family to thank for guiding me. I should add that I don’t know how these strategies will hold up as we go deeper into the crisis. Will I stick with this routine? If I do, will they comfort me in the coming weeks like they do now?

I’m not sure after yesterday. I was pretty low after a week of being surprisingly up. I need to pace myself and be ready to change course again if needed.