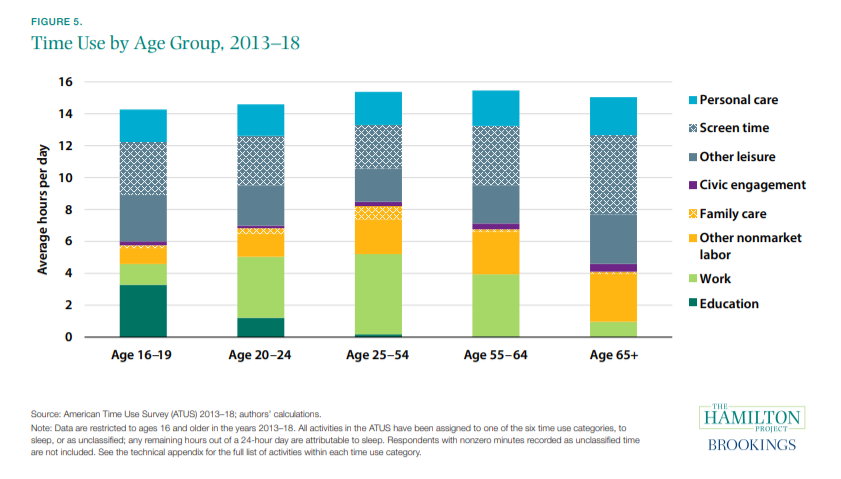 This chart shows how little time U.S. citizens, me included, spend on civic life. I’m going to try something different and let you know how it goes. Credit: Brookings Institution

I’m just over two months into my #LocalYear life experiment, and not enough has changed. That has to change or my #LocalYear won’t yield the hoped for results.

My main observation about my #LocalYear so far is that while I’ve done some new activities like Cool Block and re-allocated time to other local pursuits, it hasn’t been enough to change the quality of my everyday experience.

Simply trying a bunch of new activities, as set forth in my #LocalYear kickoff post, might not do the trick. I want to push this experiment further so a deeper, felt change has a better chance of happening. The below commitments will likely push me into new, possibly uncomfortable territory and force me to create a whole new lifestyle.

Before I introduce my commitments, it’s worth reflecting on the purpose of experiments, which is to validate or refute a hypothesis. In my case, the hypothesis is that a more localized lifestyle will be more rewarding than the one I’ve been living. Experiments impose a unique set of conditions to test the hypothesis and learn something new. That’s what the below five commitments are about — imposing some test conditions in order to learn.

Granted, this is a less than scientific experiment and the results will be subjective and self-reported. What also makes this different from a scientific experiment is that I don’t know if I can even maintain the test conditions. Some of these commitments will be difficult and maybe even impossible to maintain. That’s OK in my book because I expect to learn as much from failing to meet my commitments as I do from meeting them. I should add that while these will be hard to do, I actually want to do them.

Even with these irregularities in my experiment, I expect these commitments to ramp up my learning and help spur a more thorough lifestyle change. Here are my five personal #LocalYear commitments:

1. At least one hour a day of #LocalYear activity on average, my civic tithe.

I list this first I believe it’s the most important commitment. To make change, I need to commit time to making it. My time budget should also reflect my priorities. Why one hour? One hour would be around four times the average Americans spends on civic engagement per day according to this report. It would also be just over 10 percent of my non-working, non-sleeping time per day, which represents what I think of as a civic tithe. Tithing is an ancient practice of contributing 10 percent of your yearly income to your religious community. I’d be doing a similar thing, but giving time to my secular community instead of money to a religious one. This might not sound like a lot of time, but it would be a big shift for me. I expect that once I get rolling, the amount of time I spend on #LocalYear activities will increase. Check out what I’ll actually do for one hour or more a day at the bottom of my #LocalYear kickoff post here.

2. Start every day with a meditative walk.

Trying a new lifestyle is more than spending time on different things, it’s also about structuring time differently. In other words, it’s about new rituals. As Shareable adviser Harald Katzmair recently shared with me, ritual makes time habitable. My morning walks will take me to downtown Mountain View (my hometown). They will not only help me stay grounded psychologically, but also grounded in place. Hopefully, this will be this first of more new rituals to help me cement a new local lifestyle.

This will be a tough one because I love books and I’m embarrassed to say I have a big Amazon.com habit. Obviously, that has to change. Plus, is it possible to only buy from independent retail stores? I’ll find out. In any case, I want to support independent local businesses, which are an important part of the local economy and the formula for shared prosperity. I also want to get to know the people who run them better. I greatly value the local businesses in my city and believe it would be much worse without them. However, they’re facing an uncertain future, which this Institute for Local Self-Reliance report illustrates. Online and chain stores represent a huge and often community-gutting threat. For instance, research has shown that a new Walmart significantly reduces retail wages and economic output in the area for decades. This even has a name, “The Walmart Effect.” I want my spending to match my appreciation for local businesses. This might cost me more money, but it also might curtail my spending. I might forgo items that are hard to get locally or opt for a DIY substitute. Let’s see.

4. Offset all my greenhouse gas emissions for the year.

I had a mix of personal and professional air travel planned long before I committed to #LocalYear. I’ll limit air travel going forward not only because of the huge environmental impact, but also because travel will disrupt my local lifestyle. Offsetting all my 2020 emissions will keep my climate impacts top of mind and motivate me to limit air travel. I should be able to do this for under $300 at Terrapass, but I’ll make the final calculation at the end of the year.

5. No use of screens for entertainment. Only two hours of social media per week.

This will be the hardest commitment to meet. I’ve developed a heavy screen habit. This has been a problem since I was a teenager. In my 20s, I gave away my TV because my heavy TV habit was holding me back. Shortly thereafter, my life took off because I simply had to get a life. I went 10 happy years without a TV. Now screens are everywhere, and they’re even more addictive. I spend way too much time on them, especially Netflix and social media. I’ll reserve two hours a week for social media to meet my work commitments, which will be down from about two hours a day.

The coronavirus might impose some new, local conditions on top of these, though they might not be the flavor I want. I’ll report back next month on my progress meeting these commitments. Please stay healthy in the meantime.