Free Sale Sells out in Minutes - Shareable
Skip to content 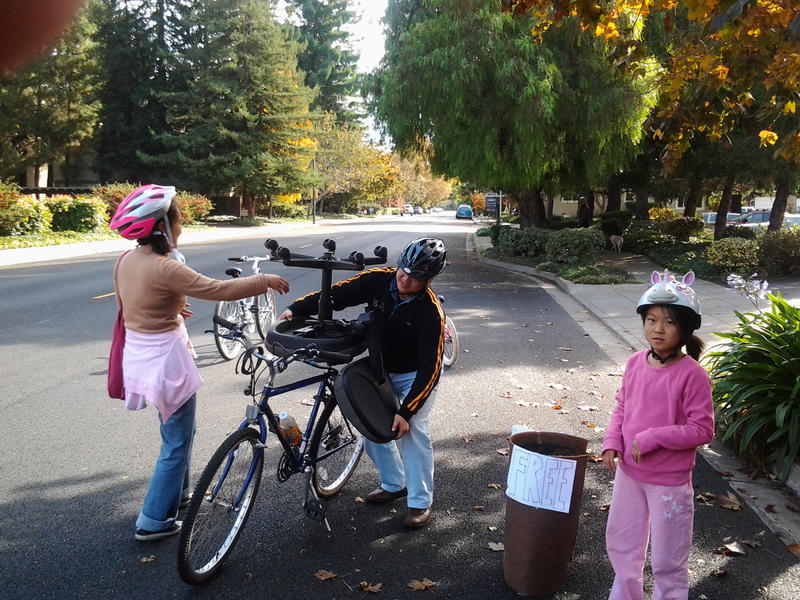 Yesterday morning, I put a set of folding shelves, a stainless steel trash can, and a smaller plastic trash can at the end of our driveway with signs that said, "FREE". I went inside to get more stuff to give away.  When I returned 15 minutes later, a woman was hauling the trash cans away on her bike. The shelves were already gone.

I got to the point of simply giving stuff away after trying a yardsale, Freecycle, and Craigslist – in that order – all with mixed results. This story of cascading strategies for recirculating our stuff has some lessons.

The lessons began about a month ago. I decided, with the support of my wife, to go on a decluttering campaign. Our house had gotten a little swollen with kids stuff and more. Our son Jake had outgrown a bunch of toys and clothes. Plus, we had a lot of stuff in closets we weren't using. We need to do some editing. I decided to try out a yardsale.

At the beginning of the yardsale, a neighbor had remarked that yardsales are never worth it – it's better to just give stuff away. While the yardsale did help us bond with neighbors, it was a failure in its stated purpose. It was a lot of work, it was time consuming, and we didn't get rid of much stuff. My neighbor had a point.

Taking my neighbors advice, I decided to Freecycle the rest. I've had some success with Freecycle in the past, but this time it was no go. Several Freecyclers made then broke appointments. There was the woman who engaged me in this extended e-mail exchange, then told me she wasn't interested. Then there was the guy who said that the condition of our perfectly good used high chair was not good enough. This was annoying.

After having no success giving stuff away on Freecycle, I decided to sell the more valuable stuff on Craigslist. This worked well. I got rid of everything in this "lot".

That said, there was one incident that irked me. A Standford MBA student and his wife came over to pick up a baby bathtub. I asked them if they had heard about the bath from Freecycle or Craigslist. They said Craigslist. After some chat, it was time to deal. The the MBA dude went all game theory on me. Granted, it was pretty dumb to ask if they heard about the item on Freecycle or Craigslist. I tipped my cards. He took advantage. He told me he changed his mind – that he didn't want the bath because a new one was not that expensive. I wasn't about to let him leave without the damn thing, so I just gave it to him. I didn't feel great to be on the other end of this calculation, but then again maybe this Stanford MBA dude really needed to save money with school loan payments and a baby on the way?

After my successful Craigslist run, I still had some stuff to recirculate. I thought I'd try the most direct method – put it on the curb for free. I was shocked how well that worked! My free sale sold out in minutes. No photos of items, no posting of ads, no e-mails, no cancelled appointments, no trip to Goodwill, and no frustration.

The lesson here is that there's a lot of friction in selling and sometimes even giving things away online. It only makes sense in certain cases. Once you consider the value of your time, it probably makes sense in more cases than we think to simply give our excess away, as my friends at Giftflow hypothesize. And the best place to give is probably right in your own neighborhood.