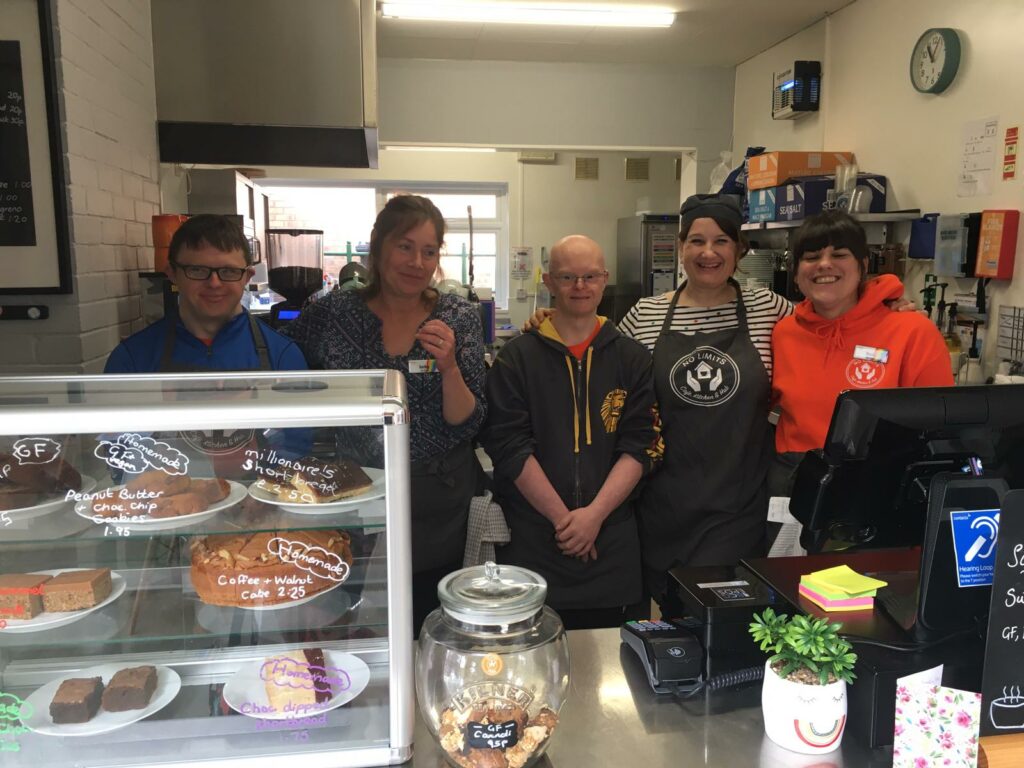 In the small town of Newton Abbot, England sits a cafe on Sherborne Road. No Limits Community Café & Hub is an restaurant offering quality locally-sourced food at an affordable price. What makes them special is that they also help to change lives and empower communities by employing those with disabilities and additional needs.

Sarah Thorp, one of the co-founders of the not-for-profit project, says her life transformed when she became a parent of a child with additional needs. This kickstarted a life transition, which also involved a career shift. Thorp, along with her husband, realized there was a lack of provision as well as opportunities for their son to become more independent, develop skills and—eventually—find work.

In England, only 6% of adults with a learning disability are gainfully employed. Research shows the benefits of hiring people with disabilities, including improvement in reliability, team morale, and productivity. Thorp says her original mission was to establish a community café & hub where young people with additional needs learn new skills, gain work experience and are supported in their transition to work and a more independent adult life.

Thorp joined efforts with her friend, Amanda Pugh, who also had a daughter with additional needs. With Pugh as No Limit’s co-founder, the pair embarked on a mission to not only launch a café, but to found a company that could break down barriers and improve the lives of an often-overlooked demographic. In doing so, they’ve beautifully demonstrated the power and potential of diversity and inclusivity.

We wanted to create a place where people with additional needs can thrive. — No Limits founder, Amanda Pugh

Their work officially began in 2018. With the support from a National Lottery Fund, Pugh and Thorp were able to run scoping projects using a borrowed café space in the town of Newton Abbot (Devon, England). They used this preliminary stage to gain experience, information and perspective, expanding their network by attending specialist education and accessibility fairs. After securing further funding, they were set to open.

Pugh and Thorp originally planned to open the hub in March of 2020, but plans were delayed due the Covid-19 pandemic. In June 2020, No Limits Community Café & Hub opened its doors for take-away, later expanding to dine-in seating as it became safe to do so. The hub’s tagline is “Changing misconceptions one cappuccino at a time”, which they do by offering a safe, inclusive and supportive space, where training, work experience and employability skills are provided for people with various additional needs.

The original space is conveniently located near a pedestrian crossing and bus stop and the initiative has recently launched a new hub where they can make their own soups and cakes. “Making our own food was always what we originally wanted, but given how busy we became, we no longer had the capacity for it,” Pugh says. “The new facilities allow all the participants in the Work Experience program to be involved with the whole cooking process, which makes them appreciate even more what’s involved. Seeing that what they’re producing is sold and enjoyed by the public is very empowering. We also now have even more scope to provide opportunities for more people with disabilities and additional needs.”

The eco-friendly café prioritizes mobility access as well and is fully wheelchair-friendly, with extra wide turning spaces in all areas. Their facility is also autism-friendly and Makaton (a language that uses speech along with gestures and symbols to help people communicate) friendly. The intentional inclusion of accessible design are evident throughout the building. There are adaptable kitchen surfaces, broad windows that help people feel less overwhelmed, equipment to support deaf people and those with visual impediments, different colors of paper that facilitate understanding, a bespoke till and much more.

There are various routes prospective workers can take to start at No Limits: the eight-week Work Experience program, long term placements, and supported employment are a few options. Many staff members have continued on at the café even after their initial program.

“The most joyful thing is to see our participants arriving here on day one lacking confidence, lacking belief, barely speaking or looking people in the eyes, and after the program, to see them leaving with a much greater degree of confidence and self-esteem as well as a lovely sense of appreciation for what this place has provided to them, knowing they’re valuable and understood,” Thorp says.

Tom is one employee who, when he started a placement at the café, wouldn’t talk with anybody and didn’t feel confident enough to serve customers alone. Two years later, he is a cheerful staff member who works as a kitchen assistant, running errands by himself. He’s known as the ‘king of coffee’ given his much admirable coffee making skills. “I love working here as I get to do lots of things and make new friends”, Tom says.

Time and funding are the main hurdles with the operating No Limits. Pugh explains: “What we’re doing here is like running two businesses: the café, which is a business in itself, but with much higher costs given the need of specialist equipment as well as one-to-one job coaches. And by being a disability confident leader, it entails a greater level of safeguarding and risk assessments, recruiting and timetabling the participants in our programs, on top of liaising with the Job Centre as well as funders. An important aspect of what we do is to explain to people what we’re about because we still find a lot of people don’t appreciate we’re a café open to all general public.”

Sustainability is also at the core of the ethics the project models. No Limits partners with local suppliers of produce and ingredients, from fruits and vegetables, to artesian bakeries and local butchers. The Coffee Company supplies the coffee grounds to the establishment and also offers free barista training to the participants of the program. Localization is also a priority for the hub and No Limits aims to “use solely Devon suppliers where possible and reduce the amount of deliveries required through careful ordering.”

Since opening their doors in 2020, the café has trained and orientated 41 participants, showcasing the benefits diversity brings, and raising awareness about disability and the importance of a diverse workforce.

“We’ve had many very able people coming through our programs. Some, despite having had a great experience here are simply not work-ready (while having a noticeable increase in their sense of worth and self-esteem), and some are more than capable, in fact, they’re a real asset, and I wish there were more paid roles available as access to work support is out there. There is a limit to how many people we can employ ourselves.”

Going forward, the project wants to expand the catering area, and plans to secure further funding and continue breaking down barriers. You can learn more and support their work here.