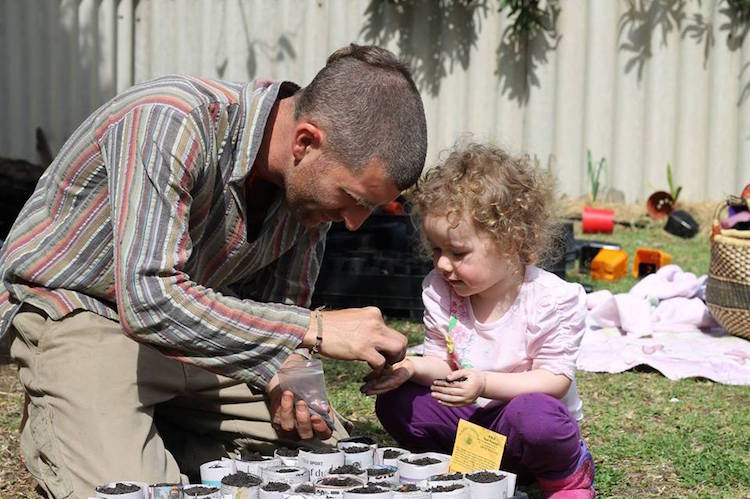 Andrew Barker and a few friends were working on an organic farm near Meadows, South Australia, eating the fruits and vegetables they grew themselves and doing their best to live in near-self-sufficiency. But when they ran out of fuel, they headed to the supermarket in a nearby town.

"I just remember walking through the aisles and thinking, 'That's not food, that's not food, that's not food,' and noticing that even the fruits and vegetables for sale looked sterile and dead," says Barker, who completed a doctorate in geochemical engineering and spent time in a Buddhist monastery before becoming a food security advocate. "There was a mother with a kid behind us in line who had a cart full of Coca-Cola and sugary cereal and I don't think she had any idea how detrimental she was being to her kid. What people were buying at the supermarket was not food, it was a pale imitation of food."

Out of Barker's frustration came action. In 2013, when Barker had moved to another nearby town, he started growing organic vegetable seedlings in his garden and giving them away free to his neighbors. "I started putting posters up saying I have seedlings, come and get them. I used to have to pay $20.00 per month [in posters] to be allowed to give away food. But I got such joy out of watching complete strangers walk out of my house with these seedlings. Then other people started coming by, and they were asking me how they could help."

Barker and the volunteers formed a committee and began organizing large monthly vegetarian meals for people in need and setting up organic farming information booths at local festivals. In 2015, volunteers began setting up free food carts around South Australia, and the Grow Free movement was born.

Now there are over 130 free food carts around Australia, filled with food for people to walk by and pick up, no strings attached. "It's a simple process — people just let us know where they’re setting up a cart and we map it," Barker says. "We encourage people to put in stuff they've grown or made at home, like seedlings, vegetables, baked goods, and preserves."

"At one point, a volunteer was knitting hats and putting them in her cart… there have also been kombucha starters, gardening books, and other useful things," he says.

The idea has caught on with a wide cross-section of Australian society. "Our contributors are a huge mixture of people who recognize that free food can be a great thing. We have at least one 12-year-old kid who is doing a cart. We have senior citizens, businesspeople, and even shopkeepers who put in their own unsold merchandise."

The movement has grown rapidly from its beginnings in 2013. "At the beginning, I had no expectations. When we reached 10,000 members [on Facebook], I realized that our movement was really catching on," Barker says. "Then we started getting members from other states [in Australia], and then inquiries from Iceland, Holland, and Canada."

Barker says food security, especially access to healthy food, is a challenge for many Australians. In isolated areas, food often has to be imported at large markups, and even locally grown fresh food is out of reach for many. "Price is a big obstacle when you’re looking for healthy food. Because it's trendy to go to organic shops and farmers’ markets, food there can be twice the price [of supermarket food] even when it costs less to grow and get to market. A lot of people can't afford that."

"The ultimate goal is to create a tighter community of people growing good food and sharing and taking money out of the food equation," he says. "If our food was free and healthy and shared, it would get rid of a lot of hunger and strife… it would even change the face of the world."

Get involved with Grow Free by joining their public Facebook group at facebook.com/groups/growfree/

Header image of Andrew Barker planting a seed with a fellow volunteer's child at a Grow Free seed-planting day, courtesy of Barker