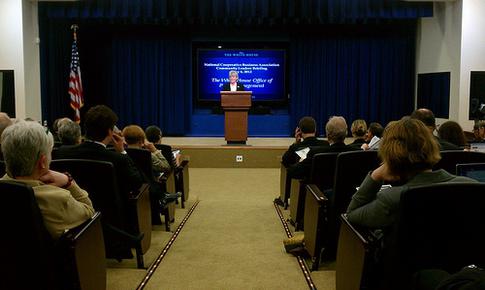 While the current narrative of the American economy is far from hopeful, cooperatives are setting a more uplifting tone. According to the National Cooperative Business Association in Washington, D.C., 29,000 cooperatives operate in the nation’s economy, and these democratically governed businesses generate two million jobs each year.

The group’s interim president and chief executive officer, Liz Bailey, steered a delegation of 150 leaders and advocates of cooperatives to the White House on May 4th to spark a dialogue with federal officials about the critical role that cooperatives play in job creation and economic development, and how that role could be expanded to revive economically depressed areas and the middle class.

Bailey said there were representatives from various sectors of the coop economy including food, agricultural, finance, housing and health care, adding that the wide representation was to “give a real flavor of how vast the cooperative model is being used in the economy." Policy makers at all levels of government are generally unaware of the huge scope, power, and promise of the cooperative model at a time when proven economic solutions are needed most. 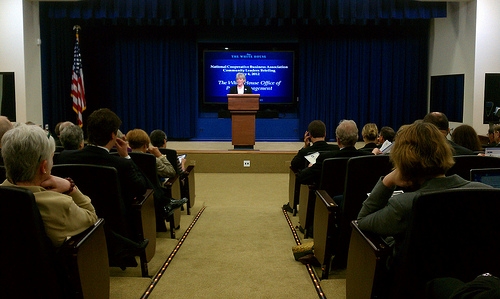 I talked to Bailey recently about some of the key issues addressed by the nation’s cooperative leaders and White House officials at the meeting. Following are excerpts from our conversation:

You recently led a delegation of cooperative leaders to Washington D.C. to participate in the White House Community Leaders Briefing Series. What ideas did you and the other leaders bring to the discussion table?

We had the opportunity to both hear from the White House about some of their issues, so it was a dialogue where first they gave us some of their key issues in terms of the economy and jobs. Then we talked to them about four key focal areas … One, cooperatives are a way to help grow the middle class. It really provides individuals with access to affordable housing, fair lending practices, livable wage jobs and all of those kinds of things that allow people to really survive and grow within the middle class, where they feel they have more money to use for other things and disposable income.

Another thing that we were pointing out to them was how cooperatives really provide consumers with more choices and access to essential services. … The third point we were making was that cooperatives can grow sustainable small businesses — that you take that individual entrepreneur and you make them a member of a purchasing or shared services cooperative, and they then have that ability to get the price advantage. They get the backroom support. They get everything that the purchasing cooperative can do for them that by themselves, they would have to front all those costs and compete with the big-box stores, but also just compete in a down economy.

Then the fourth point we were making was how cooperatives really help grow local economies and how they really give back value to the community. … And the fact that the business is a community-based business, so there aren’t investors in some distant location that are reaping the benefits. The dollars stay in the community with the member-ownership, and the fact that the business is sized and structured so that it serves the needs of that community.

What were some of the issues raised by the White House officials?

We had four breakout sessions, which is where we really got into more of the discussion of issues. One was agriculture, and we had senior people from the Department of Agriculture there who were really talking about the funding for cooperative development and the access to those kinds of grant and loan programs that are part of the USDA portfolio. There was a lot of concern about what’s happening in the current budget.

We also had a breakout session that was more on the consumer finance area. We had the treasurer of the United States moderating that group, and there they were really talking about the credit union lending issues. … We also had a breakout session on SBA lending practices, and there we had some concerns that cooperatives are not deemed eligible — not all of them — for SBA lending.

In particular, food coops are historically not allowed to qualify for SBA lending. Historically, they believe that a food coop is more like a buying coop and that there isn’t any value that is in the business itself that would be collateral for a loan. So there was a good deal of discussion about that, and how you break down some of that barrier and get the redefinition of what is a valid lending opportunity for a cooperative. We’ve been working on the Hill on that particular issue, too. I think we’re hopeful that this year we can really get some of that barriers to lending within that SBA system removed either through internal or through legislative interest.

The fourth breakout session was with the Domestic Policy Council staff. There, it was really kind of a sharing of information back and forth with looking at the whole domestic policy area and trying to gain some traction with them as to how coops are an additional tool that they can be looking to for a lot of economic development. There was also a fair amount of discussion from our group to them asking for more understanding — as they talk about small business that they add in cooperatives, so we would get more of that kind of visibility and traction for coops when we are somewhat invisible on that whole radar screen.

So basically what it did was, it laid the groundwork for a lot. Every time a question came up in either the small group or in the plenary sessions, the White House response was, in addition to talking about it, to volunteer that they wanted to continue to work with us. They suggested we work with them to set up regional meetings around the federal government to have listening sessions and town halls meetings with federal agency people around the country. We’re already starting to work on that.

What is unique about the cooperative business model that makes it conducive to generating secure and fair wage jobs?

I think that part of it is that it is so local and member-driven. It’s created for a purpose. With democratic governance, it has members' interest at the heart of the enterprise. It’s efficient because those who do the work are involved in deciding what to work on and how to work on it. You don’t have somebody at a distance making decisions about what the business is about. Members and workers control the enterprise democratically.

What are some channels of funding that are available for cooperative enterprises?

That’s one of the biggest challenges for coops, because to be a coop, your equity is from your members. You can’t have angel investors come in and own the business. At least 50 percent of the coop needs to be owned by its members. So the big problem for many coops is that the only money they’ve got for expansion, if they really want to grow the business in any substantial way or even start a coop, that member equity has to be your primary source of funding, so then finding other sources of funding is always a challenge.

There are some funds out there in the private sector, but most people want more of a return than what you can get from a coop startup or expansion, because you aren’t going to generate that same return as you would from investing in a traditional business where you’re doing it to make the money quickly. Money for cooperative development, the real technical assistance, boots-on-the-ground work — that is hard to come by.

One thing we’re hoping to learn from this work with the White House is finding where there are dollars for workforce development or the training of members of worker coops or the home care world or finding where rural health dollars could be available for coops as part of a rural health network.

Are cooperatives better suited to weather fluctuations in the economy?

There’s research that indicates that difficult times are good time for coops because people are looking for how to make do with less. I've heard from some of the large food cooperatives, “we don’t let our member stores go under.” For one thing, they may have had a better business model in the first place by virtue of being a member of the purchasing cooperative, because they were able to get price breaks that came with that group buying power. But then they say, “It’s to our advantage to keep them viable, so we don’t let our stores go under unless we’ve tried everything, and it doesn’t work.” So that the coop, especially in that small business world, their approach is — we need to work this out, we need to make sure that we can all be whole at the end of the day.