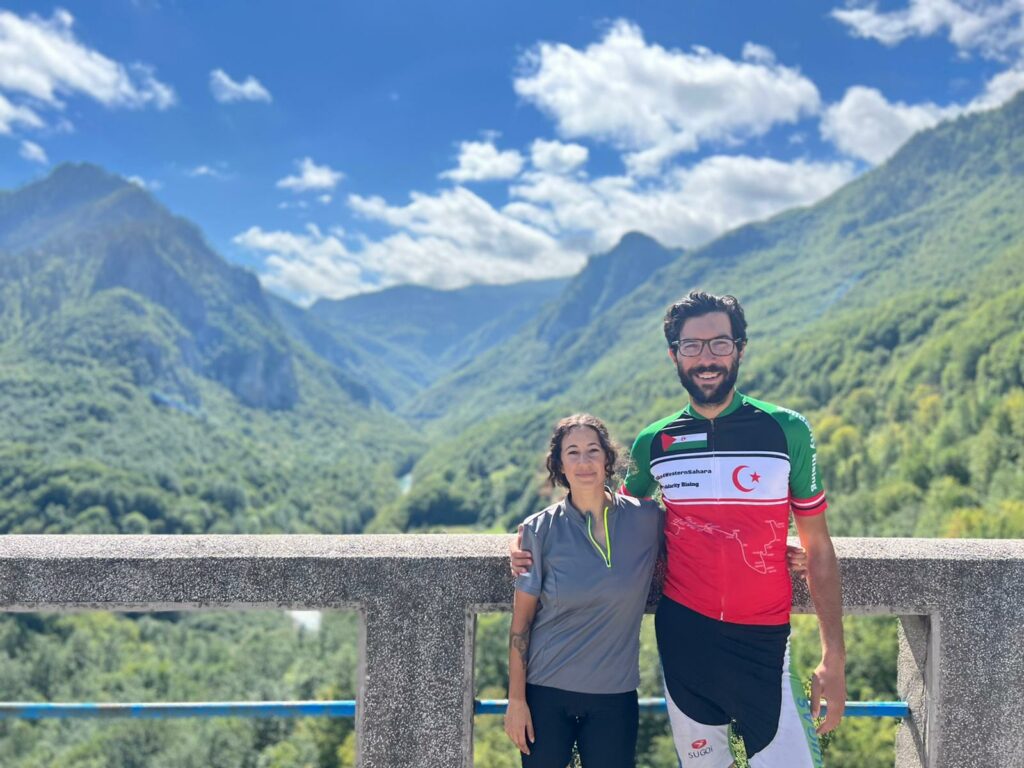 Can a 29,000-mile bike ride put a spotlight on the turmoil of Africa’s last colony?

In May, Swedish human-rights activists Sanna Ghotbi and Benjamin Ladraa set out to do just that. They’re on a quest to bike through 40 countries to draw attention to the nearly 50-year-old occupation of Western Sahara by Morocco.

There’s so little known about Western Sahara and the Sahrawi people. We asked ourselves: ‘how can this be?’ The Sahrawi are a forgotten people. — Sanna Ghotbi

Through Ghotbi and Ladraa’s nonprofit organization Solidarity Rising, the pair launched the Bike4WesternSahara initiative. They’re pushing to bolster awareness of the Sahrawi’s fight for freedom, Morocco’s violent occupation of Western Sahara since 1975, and its crackdown on journalists and any media forum.

The two have endured mountainous terrain, high altitudes, a heat wave, and sickness. They kicked off their journey in Sweden, and in four months have biked through Germany, Austria, Greece, Turkey and Albania. On September 27, they reached Macedonia. They hope to build a caravan of bikers in Spain, Western Sahara’s original colonizer.

The goal is to make it to Western Sahara by the end of 2024. “We believe if we bike longer than the equator we would make a lot more noise and get people to know about Western Sahara,” said Ladraa.

The Western Sahara conflict dates back to 1884, and a period of colonization by Spain that lasted all the way to 1975. Spain’s withdrawal in 1975 sparked a regional war, with Morocco and Mauritania both invading the territory. By the late 1970s, Mauritania withdrew; Morocco stayed, and has held control for nearly 50 years.

Outside of the region, awareness of the occupation is almost nonexistent. Morocco has routinely blocked journalists from entering the area, and the topic is not taught in schools.

“Both myself and Benjamin focused on global studies in school, where we talked about post-colonialism, climate change and other topics,” said Ghotbi. “We never heard about the history of Western Sahara.”

Since Morocco’s invasion, nearly half of the Sahrawi population has fled to neighboring Algeria in the Tindouf province, settling into refugee camps in the middle of the stony desert. Refugees, such as Sidahmed Jouly, a Solidarity Rising board member, are reliant on humanitarian aid. The climate is one of extreme temperatures, strong winds and rain. In 2019, a survey by the United Nations High Commissioner for Refugees showed that nearly eight percent of the population suffers from acute malnutrition, 28 percent display stunted development, and among children, half suffer from anemia.

“Life is very harsh here,” said Jouly, 32, who was born in the camps. “We are refugees; we are stateless in our host country.”

Jouly and his immediate family — including his parents, brother and wife — live in Tindouf. His extended family are among the more than estimated 30,000 Sahrawi people who live within the occupied territory behind a 1,700-mile sand-berm minefield, the second-longest wall in the world.

Since taking control, the Moroccan government has led with an iron fist. There have been reports of torture, disappearances, killings and repression against pro-independence Sahrawis.

“It’s a humanitarian and political crisis here…and [Bike4WesternSahara] will raise awareness about our forgotten issue, our forgotten cause, and will speed up the decolonization process in Western Sahara,” Jouly said. “Sanna and Benjamin are our heroes.”

Activism has been an instrumental part of Ghotbi and Ladraa’s lives. At 21, Ghotbi was elected to the Gothenburg, Sweden, city council, where she pushed for policies that protected the rights of undocumented migrants, unaccompanied refugee children and women who’ve faced domestic abuse.

She’s also participated in the growing anti-racist movement in Sweden, where far-right politics are on the rise. Additionally, she co-founded Digedem Lab, a democracy lab that works with municipalities, public institutions and citizens to increase political participation.

“I just have this philosophy that my reason to live is basically to try to make the world better even if I’m just one person,” said Ghotbi. She added that her parents, Iranian political refugees, also influenced her activism. “They’ve endured a lot that I haven’t, like being imprisoned and having close friends who were killed or also jailed.”

Ladraa is a musician-turned-activist whose time fundraising for the Swedish Red Cross provided him a clear view on the many humanitarian crises around the world. He began spearheading initiatives to show support for the issues impacting Palestine. That included launching the WalktoPalestine, a 3,100-mile jaunt between Sweden and Palestine to raise awareness about the human rights violations in the Gaza strip. He also biked over 1,200 miles through Sweden as part of his Bike4Gaza initiative to raise funds for the Palestine Children’s Relief Fund.

Ladraa discovered the crisis in Western Sahara through a Sahrawi friend. The two also visited the refugee camps. “It does something to you, when you start to learn about these things,” he said. “I think the only way to live after that is trying to be a force for good and doing as much positive impact as you can.”

Word of their journey has gained attention, especially on social media platforms. People have lent their support through donations, offering them places to stay and providing warm meals. “We’ve made new friends and connected with new people, and we are able to tell them the story of Western Sahara. So we feel like every day we’re doing some work to reach our mark,” said Ladraa.

While on their journey, they’ve also connected with local human rights organizations, universities and other institutions in hopes of opportunities to host lectures and workshops. In September, they held an online security workshop for Sahrawi refugees in collaboration with San Francisco-based nonprofit Electronic Frontier Foundation. The weeklong workshop trained Sahrawi refugees on how to protect themselves against spyware used by the Moroccan regime to surveil activists.

Bike4WesternSahara has not been easy. Outside of the physical toll, Ghotbi and Ladraa have faced financial burdens even with the donations. Ladraa says that the cost of equipment has been greater than estimated. There’s also an ongoing concern for their own safety. In a recent social media post sharing their quest, they received more than 1,000 hate responses. They were called “terrorists,” “mercenaries,” and “dogs.” In private messages, they’ve received threats against them and their families.

But the threats have yet to outweigh the gratitude received from Sahrawis activists on social media, thanking them for sounding the alarm on their crisis, said Ghotbi.

“If you are a forgotten people, and then you see someone is biking your flag around the world, it’s definitely more meaningful,” she said. “It’s all been quite humbling.”