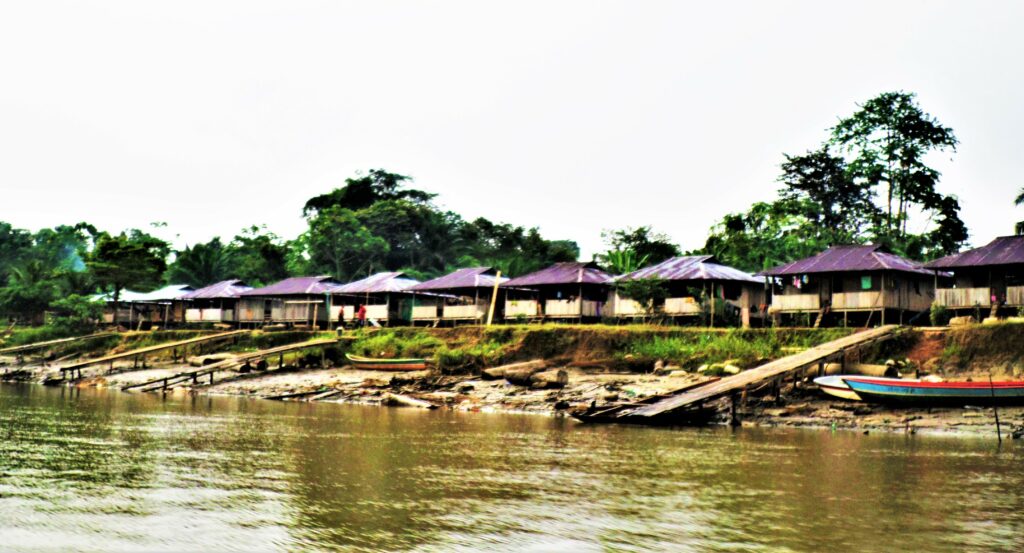 Rights of Nature is a movement that has been fortifying itself around the world as an antithesis to the dominant paradigm of limitless growth and extractivism. Firmly grounded in holistic Indigenous worldviews, this ecocentric paradigm could be a global game changer if a coordinated and adaptable effort — based on shared knowledge systems and accountability — is established.

Colombia, with its biological, cultural and hydrological richness, has become a trailblazer in legally formalizing Rights of Nature, beginning with the 2017 Judgement of the Atrato River, but to what end? Who will defend these rights against powerful legal and illegal natural resource exploiting interests in such a conflicted country, and how can these formal voices for nature be strengthened by tools of modern science and technology, as opposed to repressed by them?

The Choco Rainforest along Colombia’s Pacific Coast pulsates with life. Thousands of endemic species call this dense forest home, while expansive rivers empty out into the ocean through extensive deltas and mangrove forests. Afro-Colombian and Indigenous communities live side-by-side — or, more frequently, face-to-face — along the rivers of the Choco.

The isolated rivers and forests of the Choco have also been hotspots of conflict, illicit activity and state neglect, facilitated by their strategic access to the coast. Illegal gold mining in particular — along with drug, arms, timber and wildlife trafficking — has run the illegal economy and fueled conflict in the Choco for decades, making its Rivers of Blood the harsh, semi-literal inverse of the Indigenous interpretation of rivers as Mother Earth’s lifeblood.

While artisanal mining for alluvial gold was — and remains — a relatively low-impact livelihood for the Choco’s many descendents of African slaves, semi-industrial mechanized mining has deforested, degraded and contaminated the rivers and riverine habitats of the Choco for the past 20-30 years. Both the open-pit mines and dredges along the rivers have used mercury in copious quantities, poisoning the drinking water and fish species. The ecological and health crisis is devastating Afro-Colombian and traditional Indigenous riverine communities.

The Embera Dobidá — which literally means people of the river — live along the 416 mile, south-to-north flowing Atrato River and its tributaries, and have been actively protesting the exploitation of the Atrato and its surroundings for decades.

Embera Dobidá leader Belarmino Tunay told me in December 2019, “For us, the people of the river, the Atrato is everything. It is the origin, the provider of life and the extension of Karagabí [a holistic conception of a cosmic world and creator]…. The Atrato speaks to us, and it is suffering. The damage being done affects our health and threatens to destroy our culture.” Studies have shown dangerously high levels of mercury in the water, in fish species and in the people living along the banks of the Atrato, including members of the Embera Dobidá.

South of the Atrato River Basin lives the Wounaan Indigenous ethnic group, principally concentrated along the San Juan River within the Choco.

The San Juan has its source along the Andean slopes then flows west-southwest-west before draining 240 miles downstream into an impressive delta full of rich mangrove forests that depend on nutrient-rich sediments accumulated throughout the San Juan’s journey. Many fish species spawn within these mangrove forests, and just off the coast are breeding grounds for humpback whales, whose dances and songs inspire awe above and below the surface. It is a beautiful area at the confluence of different ecosystems, where Indigenous communities lived in harmony with this diverse ecological milieu for millennia.

The Wounaan — sometimes referred to as Embera Wounaan — are closely related to the Embera Dobidá (as well as other Embera such as the Chamí and Katío), in genealogy, linguistics and many traditions, though they subscribe to a number of distinct beliefs and practices specific to their biogeography. The Wounaan base their worldview around a “Supreme Father” known as Inwadam, who created all living beings in, along, and including the San Juan River, the less voluminous but ecologically unique Baudó River, and the limitless Pacific Ocean that they flow into.

Respected Wounaan teacher and werregue artisan Yenny Cardenas spoke to me in her community of Union Balsalito on the northern bank of the lower San Juan River. “The river provides us with our livelihoods and our food, but more importantly it allows us to preserve what our ancestors have taught us about Inwadam and to practice our traditional crafts and medicine,” she said. “We live in constant fear though, knowing that someday soon we may be forced to leave our homes on the river permanently.”

Tragically, the last few decades have brought strife and degradation to the idyllic river and riverine communities of the San Juan River Basin. And like the Atrato River, the San Juan River is believed to be contaminated with mercury from illegal gold mining upstream.

Within this complex socio-economic and environmental context, Colombia’s Constitutional Court gained international notoriety in 2017 for granting legal biocultural rights of “personhood” to the degraded Atrato River. Local “guardians” —  including members of Embera Dobidá and Afro-Colombian communities — are now responsible for being the legal voice of the river, in order to ensure its conservation, restoration and dynamic evolution.

How can we turn this potentially revolutionary ecocentric framework of Rights of Nature from eloquent legalese, symbolic victories and often misunderstood traditional Indigenous worldviews, into pragmatic action in high-risk areas dominated by extensions of the modern world, such as rivers and riverine communities impacted by illegal gold mining and conflict?

To begin with, ways must be found to ensure the health and security of those individuals and local communities who speak in defense of rivers, forests, coral reefs, individual animal species and other designated legal persons within the Rights of Nature paradigm. Eliminating the existential threats to the Embera Dobidá and Wounaan, for example, is essential to protecting and restoring the diverse ecosystems of the Choco.

To bolster formalized legal Rights of Nature in general and enforce accountability, culturally appropriate tools for monitoring, communicating and incontrovertibly documenting violations of nature’s rights are also needed. For off-grid communities, integrated solutions for connectivity and access to energy sources are also important, to coordinate monitoring efforts between themselves, and to share and receive vital information in real-time with the outside world.

Adaptable complex frameworks, such as the Multiple Evidence Base (MEB) approach and Mixed-method bicultural research, can help guide the formation and evolution of resilient, shared-knowledge initiatives around the world. “Using water as a central point of multidisciplinary, intercultural and educational collaboration, we can develop new ways of understanding our surroundings and place within them,” says professor Rafael Hurtado, a physicist from Colombia’s National University. Professor Hurtado leads REMONA, a community-based water quality monitoring network built around principles of complex systems science, that has recently been introduced to several isolated Indigenous communities in Colombia.

These kinds of multidisciplinary and intercultural shared knowledge approaches between integrated science and traditional knowledge can produce mutual understanding and evidence considered concrete within modern judicial structures; they may, in fact, form the foundational structure for upholding the rights of rivers and other dynamic ecosystems to “exist, thrive and evolve.”

Progress in Colombia since the Judgement of the Atrato River

The Judgement of the Atrato River set a strong precedent for Rights of Nature in Colombia, and along with some celebrated rulings granting personhood to sacred rivers in New Zealand and India, for further Rights of Nature advancements around the world.

Between 2018-2020 there have been a number of local court rulings in Colombia, mostly at the municipal level, that have given nominal legal rights to some of Colombia’s rivers: the Cauca River, La Plata River and Pance River, for example. Rivers connect diverse ecosystems, and damage in one or multiple sections of a river can have cumulative impacts downstream, so — in reality — coordinated international, national or at least regional efforts are needed to effectively enforce Rights of Nature for rivers.

The big post-Atrato victory for the Rights of Nature movement in Colombia, and potentially for our highly stressed living planet, was a 2018 ruling by the Colombian Supreme Court granting legal rights to the entire Colombian Amazon region. The proclamation builds off of the Judgement of the Atrato River, and is a rather beautifully crafted and comprehensive document. How Rights of Nature for the Colombian Amazon will formally and effectively be implemented remains to be seen, as deforestation, land grabbing and illegal gold mining have rapidly expanded throughout the entire Amazon region, including in several parts of the post-conflict Colombian Amazon. Illegal actors have also become further emboldened by the uncertainty surrounding the COVID-19 pandemic and rising global gold prices.

An integrated, multidisciplinary and intercultural evidence-based system is needed to support the newly designated legal voices of Colombia’s rich ecosystems. A successful framework for enforcing Rights of Nature for the Choco and the Colombian Amazon could lay the groundwork for coordinated, interconnected efforts for the entire Amazon, and other bioculturally rich areas globally.

Daniel Henryk Rasolt is an independent researcher and writer, and the founder of Unbounded World, an initiative that takes an integrated approach to environmental and cultural preservation. He holds

Daniel Henryk Rasolt is an independent researcher and writer, and the founder of Unbounded World, an initiative that takes an integrated approach to environmental and cultural preservation. He holds a degree in astrophysics and works in diverse disciplines related to energy, the environment, health and traditional cultures. His interdisciplinary and intercultural approach has a basis in complex systems science. @DHRasolt.