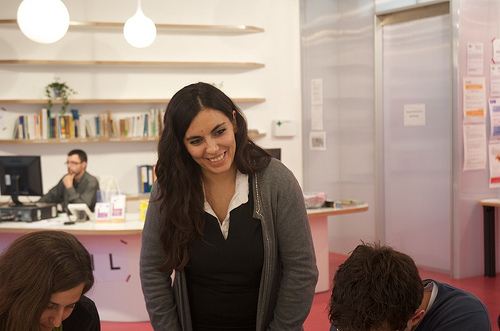 Sarah Toumi is a Franco-Tunisian youth advocate who started DREAM, her organization, as an incubator for Parisian youth with an interest in social entrepreneurship and community innovation. We spoke to Sarah about youth empowerment, co-working spaces, and her most recent project to fight desertification, poverty, and gender inequalities in rural Tunisia.

Enabling City: Your activism started very early, at age 11. Can you tell us a little about what first sparked your desire to get involved?
Sarah Toumi: It all started when I spent some time in the Middle East and Northern Africa, because it’s there that I first discovered poverty and gender inequality. I was living in Paris at the time and those experiences affected me greatly. I wanted to do something about them, so I decided to focus on Tunisia, where my father was from. I founded my first NGO, a centre for youth and women in Bir Salah, when I was 11 – we started with three computers and later evolved into a series of activities some friends from France and I organized over the course of our school holidays.

EC: You won the Ashoka Youth Changemaker Prize when you were 19. How has that experience changed what you do?
ST: I was approached by Ashoka in 2008 following my involvement with various youth organizations in France and abroad. Ashoka supported and coached me, and helped me understand how to sustainably design a project that could advance my vision. I was encouraged to believe in my dreams and to explore how to keep them alive in the long-term, which had a big impact on me.

EC: You and your sister co-founded DREAM, a youth not-for-profit, in 2008. What is DREAM's mission, and what are some of the issues you address?
ST: After winning the Ashoka youth prize the political climate in Tunisia got worse, so I decided to share what I had learned about social entrepreneurship with other aspiring changemakers in France. DREAM was born out of the desire to coach Parisian students and to help them grow their social and environmental projects. As a first step, we created a documentary on global youth activism focused on the 2008 World Youth Congress in Quebec. Then we welcomed 12 projects-holders to work with us in Paris. At first, DREAM was just a network to support and connect youth who had a common goal, but in 2011 we transitioned to being an incubator for youth-led projects and start-ups, providing access to financial support, volunteer help, office space, mentoring and more. 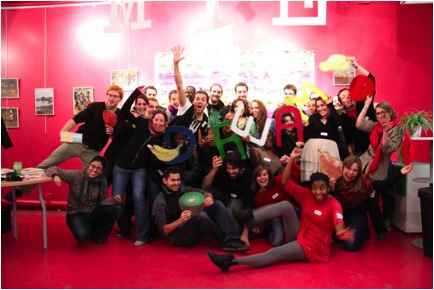 DREAM is an incubator for social and community projects for students

EC: DREAM also has ties with La maison des initiaties étudiantes, which was one of the first co-working spaces in the world and one of the very few to focus entirely on supporting youth-led projects. How was your experience working from their space?
ST: La Maison des initiatives étudiantes (MIE) was a fantastic springboard for DREAM. We had more than just access to work space, we could rely on the expertise and advice of veteran mentors. In the early days, MIE supported all of our young project-holders by offering them a platform to showcase their work and attract media attention; today, we still enjoy a strong working relationship and I am happy to see them expanding to four additional locations in Paris.

EC: As a Franco-Tunisian changemaker, you have worked tirelessly to have a positive impact through your projects. What is social innovation/entrepreneurship like in Tunisia?
ST: People often ask me what my “job” is and, no matter where I am, my answer is always “I am a dreamer.” Ninety-nine per cent of them laugh, but there's a one per cent that thinks social entrepreneurship is amazing.

Tunisia has been under a 23-year-long dictatorship, which is why the right to create a business or organization is new for many people there. Social entrepreneurship is at the very early stages, but it is growing spontaneously – over 14 000 NGOs came to life after the revolution, and the launch of the Tunisian Center for Social Entrepreneurship is proof of the country’s strong desire for change. People need more business training, but the ideas and the determination are certainly there. I have been personally mentoring a few Tunisian social entrepreneurs, and they have wonderful projects covering anything from locally made fair-trade products to independent media, from the social reintegration of prisoners to the cleaning out of phosphate… It’s encouraging.

EC: Outside of your role at DREAM, you are involved in no shortage of interesting side projects and campaigns. What are some of your most recent ones?
ST: My most recent one is Acacias for All, a project that was born to fight desertification, poverty and gender inequality in rural Tunisia. We fund the project through carbon offsets, and in turn work to plant over 10 000 acacias – trees that are especially good at fighting desertification – to restore the ecosystem and create a strong network of artisans and community leaders who work co-operatively to craft fair trade products made with local resources. Eighty percent of Tunisia’s land is at risk, which means that if we do nothing, eighty percent of Tunisia could become a desert by 2020. This has obvious impacts on the environment­, but also on the economy, because people rely on farming to make a living, and on social justice, women and youth are typically the first one to be hit by a crisis. Acacias for All is a way to holistically address these interconnected issues.

EC: Why is it important to keep a youth perspective when advancing social innovation/entrepreneurship?
ST: Today’s youth are living a global crisis. They were born in it and they are fed up with it. I think that's why more and more social innovators are taking matters into their own hands. Young innovators are not doing so to get rich or powerful – they are one of the largest demographic in the world, certainly one of the most vulnerable, yet they have very little representation. That's why we need to integrate more of their leadership and vision if we want social innovation to show us a way out of this crisis.

EC: You have recently completed a graduate degree at La Sorbonne, with a thesis on female adventurers of the 19th century. Do you see any parallels between these female explorers and young female entrepreneurs like you?
ST: Yes, female adventurers of the 19th century were pioneers, much like today’s young female entrepreneurs. They followed their curiosity and passion, no matter the social conventions of the time. They made it possible for more women after them to travel freely, and I like to think that, in a similar way, female entrepreneurs are now making it easier for any woman to create a business, especially a social business, and to explore solutions for a more equitable future.

EC: What excites you the most about the future?
ST: I'm excited by the idea that I don't know where I will be or what I will do, knowing at the same time that I will be working on projects that address social injustice no matter where I am. More importantly, I am excited to know that I will not be alone – thousands of young activists out there are joining this movement, and our numbers get bigger by the day.

Follow the DREAM team on Twitter, of visit the Acacias for All project to learn more about Sarah's latest work.