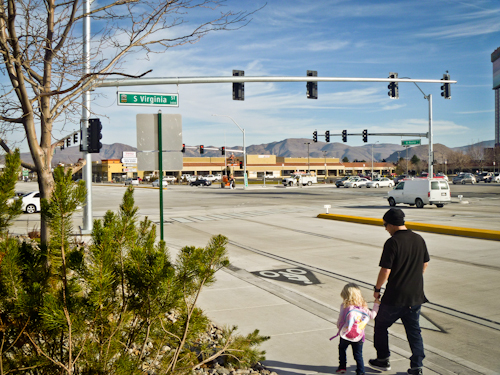 “I’ve never had my driver’s license,” Kevin Campbell says. A curly-headed 22-year-old with a Movember ‘stache, Kevin is the newest staff member at the groundbreaking Reno Bike Project. There’s a reason he’s never driven: A few years back, he was struck by a car while walking in a crosswalk.

Reno’s central streets are wide, straight and flat, and the valley is ringed with miles of scenic off-road trails. On paper, it’s a cyclist’s paradise. But several years ago, the city’s Bicycle Advisory Committee was disbanded, and the wide streets were given over to fast-moving cars. Meanwhile, the city neglected to upgrade its spotty sidewalks to meet the standards of the Americans with Disabilities Act. The result was an increasingly car-friendly city that was ever more dangerous to anybody with fewer than four wheels.

That was the state of things in 2006, when two young Renoites founded the Reno Bike Project. They started with bicycle donation drives, founded a nonprofit repair shop, and quickly dug in to bike advocacy. The response they received – not just from riders, but from City Council members, media and the Regional Transportation Commission (RTC) – was overwhelmingly positive. In just five years, Reno redesigned its priorities, made systemic changes and was awarded the American League of Bicyclists’ “Bicycle Friendly Community” Bronze status. 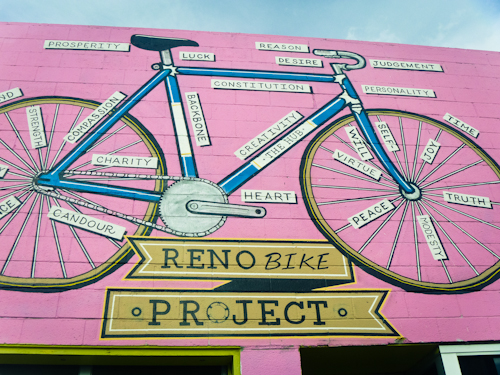 During the boom years of the 2000s, Reno invested in expansion at the expense of community. New housing developments sprang up on the outskirts, and what had been a geographically close community soon found itself strung out for miles along the north-south highway. Kids like Kevin Campbell felt stranded in their own neighborhoods, without affordable transportation to reach the town center. “Young people feel stuck,” Campbell says. Without jobs and affordable amenities, Reno wasn’t a livable place for the struggling younger generation. So they just left. Nearly all of Campbell’s classmates moved away after graduation.

Jeff Mitchell, Reno Bike Project’s Program Manager, calls it a “brain drain”. “There's been a large amount of flight out of our city to Portland, Seattle, San Francisco, New York. There are a lot of people from Reno doing a lot of cool stuff that doesn't benefit Reno, because they're doing it somewhere else.”

Campbell found his own mobility on two wheels. “You can’t walk 30 miles, but you can ride 30 miles,” he says. The Bike Project’s founders – Noah Silverman and Kyle Kozar – also loved riding in Reno, and simply didn’t want to leave. Along with a growing group of young adults working in the arts, food, agriculture and politics, Silverman and Kozar chose to stay and fight for change. They found support in a few influential local figures, who realized early on that investing in young people would be the key to helping Reno-Sparks survive the economic downturn.

“It’s going both ways,” Mitchell says. “There’s this huge youth push – people saying, ‘I’m gonna change things, don’t get in my way’ – and then a bunch of key older folks what are in positions to say ‘no, this is what Reno needs, without places like this Reno’s gonna die.’ And they’re backing us.” 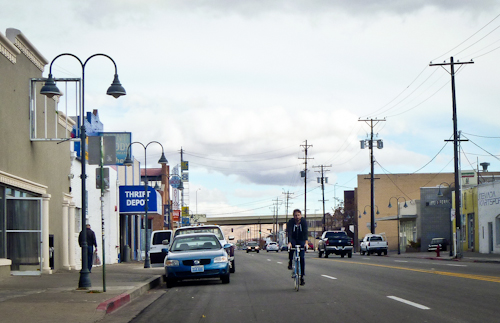 Bike Project shop manager Johnny Daggett rides along 4th Street. At rush hour, this street is clogged and treacherous to riders. Planned improvements will make it bike-friendly and are expected to help stimulate economic activity in the struggling neighborhood.

If you look from the right angle, you can see dollar signs in bike wheels. A slew of recent studies have shown significant financial benefits to cities investing in bike and pedestrian friendly streets. A 2004 study in North Carolina’s Outer Banks found that bicycle tourism brings in $60 million every year and creates 1,400 jobs – while attracting highly educated, well-off visitors. Meanwhile, Portland found that biking generates over $100 million of economic activity each year, and will create significant long-term savings for the city as a whole. 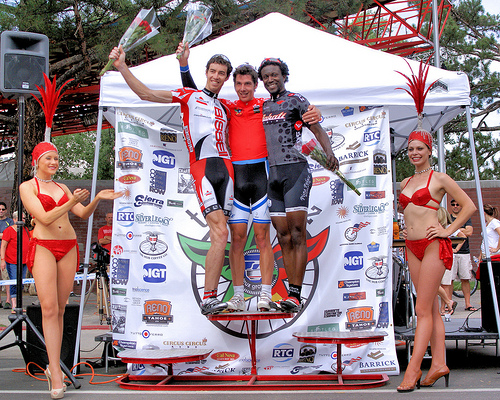 Only in Reno: The 2011 winners of the annual Tour de Nez bike race pose with their prizes. Tour de Nez attracts serious racers and has been highly influential in promoting bicycle culture in the area. Photo by shortchineseguy on Flickr.

There are indirect, long-term economic benefits, too. While previous generations of young adults have fled Reno, investing in safer streets will make local neighborhoods attractive again. In fact, on the corridors where the RTC has reduced traffic lanes and installed bike paths, accidents have been reduced by up to 46 percent. Kevin Campbell thinks that’s a big improvement. “Adding bike lanes improves the streets,” he says. “It’s going to resolidify the community.”

The RTC also sees opportunity in the idea of connecting more people to its existing bus network. “We want to provide more access to our bus stops,” says Amy McAbee Cummings, RTC Planning Director. Doing so will reduce traffic congestion, improve connectivity – and bring in more fares for the growing network. 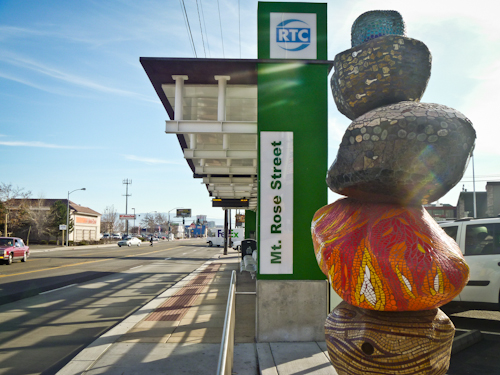 "Transition," a commissioned piece by local artist Eileen Gay, is displayed at a newly-built bus shelter on Virginia Street.

Leveraging the Community: There’s an App for That

From the beginning, the primary goal was to provide services and amenities that people would actually use. However, the RTC had poor data not just on what was needed, but on the state of repair of existing sidewalks and bike lanes. Working with the Fehr & Peers consulting firm, the Commission started actively reaching out to the community through neighborhood associations, a new website, social media presence, two major public workshops, and a smartphone app.

The app allowed riders to take geotagged photos and submit them to the RTC’s website, where they became publicly visible. If a corner was dangerous, it could be logged and investigated. Cyclists could also report places where they liked to ride and felt safe. Meanwhile, a walking survey documented the state of sidewalks and curbs.

To gather as much input as possible, the RTC hosted workshops that allowed the community to openly discuss ideas for a better transportation network, and fill out individual surveys about how they traveled. “It was really a grassroots effort to get community input,” Cummings says. “We’re so fortunate here in the Truckee Meadows to have an active, engaged cycling community … You’re not going to hear better information than from the people who are out there riding every day.”

The RTC and the Bike Project also joined together for a couple of publicity stunts, including a mass ride down Reno’s busy, bumpy 4th Street to raise awareness for the RTC’s Complete Streets project. The ride was featured in the Reno News & Review, opening a conversation about the need for continuous bike lanes in congested areas. “The safest option in that section of Fourth Street is currently to ride in the gutter,” said the News & Review, “not a romantic notion, nor a comfortable one.” 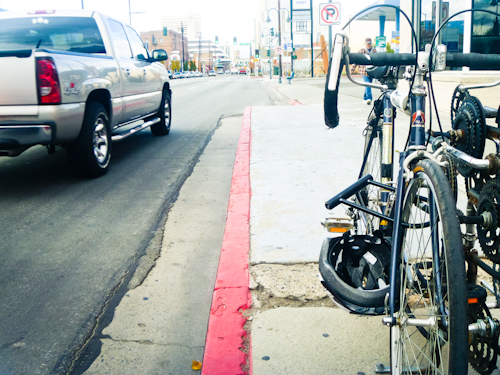 At least the gutters are usually dry. Improving this street, one of Reno's main east-west thoroughfares, will help create a corridor for cyclists and pedestrians to cross downtown.

Unfortunately, there are still plenty of Reno drivers who’d prefer cyclists to stay in the gutters. “There’s a lot of pushback from the non-riding community,” says Michael Moreno, RTC Public Information Officer. With any cultural shift comes a significant ideological disconnect; bike lanes at the expense of traffic lanes may make sense to some citizens, but for many people they’re not worth the perceived cost.

“A lot of times, people don’t agree with what (the RTC) wants to do,” Mitchell says. “It can get pretty heated.”

One of the biggest concerns from non-riders is the reduction in traffic lanes. Prater Way, a well-used corridor, recently went from four lanes to three. Drivers were worried about their commute slowing down – but as Cummings points out, they’re really only slowing down to drive the speed limit. Before a roadway gets restriped, the RTC analyzes the traffic to be sure thinning lanes won’t clog up the street. The result: While travel times don’t change significantly, the corridors are much, much safer. “Reducing lanes reduces the number of crashes by 30 to 40 percent consistently,” Cummings says.

Another big concern is the cost. “People say that bicyclists don’t pay tax dollars,” Moreno says. “That’s simply not true. We all drive cars and we all ride bikes, and we all pay taxes.”

Even the actual process of painting new lanes on the roads doesn’t affect the budget. “Every seven years we resurface or do a slurry seal on regional roads,” Cummings explains. “When we do this, it basically gives us a blank slate on the roadway. Then it’s just a matter of striping.” The Complete Streets program’s only added cost is in maintenance, which is covered by individual districts.

The non-riding community made its concerns heard, but ultimately was overridden by a horde of enthusiastic cyclists. The Bike Project kept its followers involved and updated, and cycling advocates showed up to all the open meetings. “If you just have enough people that show up and fill out the survey, you can augment the data in a way that benefits the goal you’re trying to achieve, and results happen,” Mitchell says. 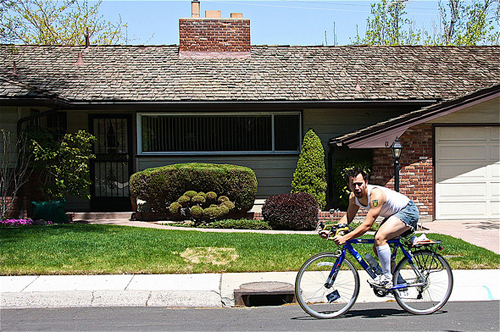 In the end, the cyclists’ enthusiasm had a big effect on RTC staff and engineers. The result of all this advocacy contributed to three major pushes:

“The change is actually super subtle,” Mitchell says. Reno applied for a major grant to cover implementation costs, but didn’t win – so the changes will happen gradually and focus on side streets instead of major thoroughfares. “You’ll start to notice, ‘oh, there’s a bike lane on this street now.’ Over time, across the entire scape of the city, that adds up.”

In 2011 and 2012, it added up to about 145 miles of new bike lanes throughout the city area. Several corridors have already been updated, and the University of Nevada is conducting a survey into how that’s affecting local business. With economic signs pointing toward the positive, Reno and Sparks are looking into a new bike sharing program, and the RTC is finalizing a regional plan that will focus on sustainable transportation, economic development and safety.

“The old days of Reno are gone,” Kevin Campbell says. “The politics have really shifted to meet the community.” Nowhere is that more apparent than with the cycling community’s successful repainting of their own city streets. 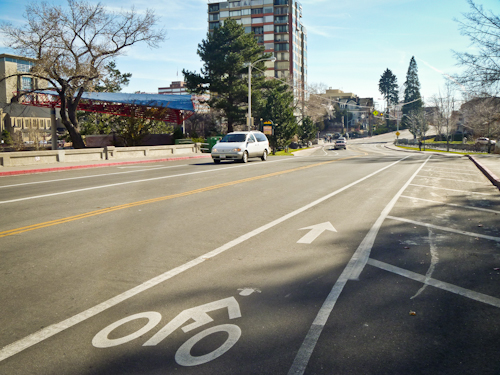 Reno's wide, calm streets and sunny skies make it a potential cyclist's paradise. All photos by Jessica Reeder, except where noted.