Wildfire blackouts got you down? Start a battery sharing collective like we did in Oakland
Skip to content 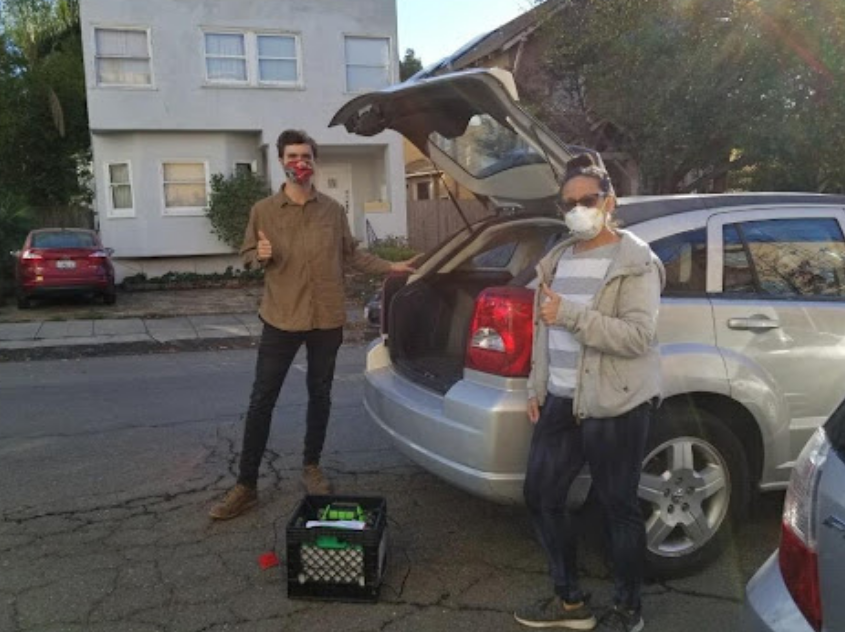 Use the below player to listen to the audio version of the story:

It was October 2019 and wildfire season once again.

After two years of devastating wildfires in Northern California, including one that was started by chronically neglected electrical lines, our utility giant PG&E chose the unfortunate response strategy of massive power shut-offs in targeted neighborhoods throughout its jurisdiction.

Sadly, my neighborhood in the eastern part of Oakland, was one of the potential shut-off zones due to its position at the bottom of the fire-prone hills.

I felt fairly well-prepared for the likely shut-off during the multi-day dry wind event. I had plenty of battery-operated lights and devices and figured I would just avoid opening my refrigerator for a few days and have a big cooler ready with ice for the essentials.

Sure enough, one evening everything in my home that uses electricity turned off.

I sprang into action, setting up all the supplies I had ready. As one day turned into two, then five, then eventually a whopping nine days, I tried to push back the tears knowing I had lost all the food in my refrigerator and freezer.

I was also quite grumpy from not having enjoyed a hot shower that whole time.

To prepare for future energy shut-offs, I researched, among other things, solar generators — which are not so much traditional generators as battery banks that can be recharged by a few different sources, including solar panels.

I preferred this to regular gas or propane generators, which are loud and must be set up outside due to carbon monoxide and other toxic fumes.

Oh yeah, and they can also explode and start fires.

As I researched solar generators — and saw the prices in the thousands for a unit that would be powerful enough to run a refrigerator as well as charge devices — I wondered how those with expensive medical needs, or limited income, or both, could possibly be expected to survive the next round of wildfire blackouts.

And the likelihood of more blackouts seemed almost guaranteed in this era of climate change and criminal failures by utility monopolies.

Based in the SF Bay Area, the People Power Battery Collective is a grassroots mutual-aid group providing backup power to those experiencing power emergencies.

The purpose of the Collective is to build a community of folks supporting each other through emergencies via self-organized energy resiliency. In order to access one of the backup batteries during an emergency, one needs to become a member. This means anything from being on the group listserv and staying connected, to becoming an organizer, which is an option for anyone who can dedicate a few hours each month to help manage the project.

I asked some of the organizers what led them to join this collective.

For Matt Kroll, who also works as a solar systems designer at Grid Alternatives, it’s a unique, and necessary, opportunity.

“To my knowledge,” he said, “no other group is currently doing community-based backup power solutions and this is something the community needs.”

That sentiment is shared by Kansas Heaney. “I think it’s appalling that people can lose their power and there are no systems in place to help them compensate during those times,” they said. “Power is a necessity and people deserve not only access to it but a say in how it’s managed.”

Another member Crystal Huang, remarked “to be a proactive voice in response to the gap created in the community as a direct result of PG&E’s power outages where communal health and other immediate needs are not taken into account. I like that the Battery Collective helps close this gap.”

How Does the Battery Collective Work?

Each battery pack stays with a member who can make sure it is fully charged at all times. When an energy emergency strikes, those who need a battery fill out a request form that alerts organizers, who then help get a battery to whoever is in need. Each battery comes with a user guide and members also get access to a short explanatory video.

If, by the time the battery is drained, the person has their power back online, they can recharge it for the next person. If not, then they can contact someone else in the collective who can recharge it.

Currently, batteries are recharged through wall outlets, but the collective is working on acquiring solar panels as an alternative.

When Berkeley resident Tavi Baker lost her electricity due to a fire down the street, she was able to use one of the collective’s batteries.

“It even made me interested in how batteries operate and how our housing co-op could participate,” she said. “I hope the network can expand and be replicated so more folks can have access to resources like this in an emergency.”

Currently, the model that the People Power Battery Collective implements is still in its growing stages. They hope to be able to scale up and replicate the framework in other communities, creating a nascent network of energy self-sufficiency.

“This project is scalable and commutable,” noted collective member Yasir Cross. “Efforts have been taken to design with the ability to duplicate the end product.” Another collective member, Margie Lewis remarked “The solutions we are working on are in sync with many local groups interested in addressing hubs and sharing resources to deal with emergency situations.”

While the collective has been creating efficient systems to run this operation smoothly and acquiring the technical skills to maintain the batteries, everyone agrees that working together has been the most meaningful.

“I love the atmosphere of cooperation, trust, and respect,” Margie notes. “Collectively we have so much to offer.”

The same is true for Matt Kroll, who says he loves “the satisfaction of making all this happen ourselves — a grassroots, people-powered initiative in action!”

As for me, I’m proud to say that I’ve been an organizer with the Battery Collective. It’s been both relieving and empowering knowing that with the next blackout we all have a resource that we can look to for help.

Susan is a Bay Area-based activist working at the intersection of Environmental and Social Justice. She is also deeply involved with mutual aid, healing work, education and traditional ecological technologies.

Susan is a Bay Area-based activist working at the intersection of Environmental and Social Justice. She is also deeply involved with mutual aid, healing work, education and traditional ecological technologies.