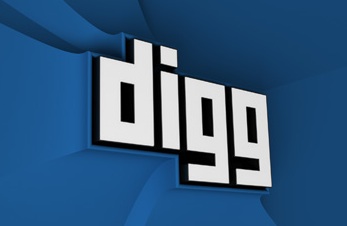 The venerable social news service Digg has a problem. As Alternet reports, a team of conservative users have been gaming the system for years through an organized effort to vote down news items contradictory to their ideology. Recently, Jezebel.com looked into the outward hostility to women from members of the boys-club userbase, which posts headlines and comments filled with frat-house misogyny. On a network that has long claimed to democratize the news, it’s looking like a selective group is calling the shots. And that’s a problem.

Or is it? New online services are launched all the time–is there anything wrong with a single social news site that only caters to a limited demographic? There are certainly plenty of other competitors available. Perhaps the problem is actually in the company’s messaging–Digg frames itself as a democratic news service for a diverse array of users, but has courted an overwhelmingly young white male user base through marketing efforts such as the party-hardy, dude-centric tech news podcast Diggnation.

If Digg is content with being the news source for young white dudes into Ron Paul and modding their Xbox’s, there’s nothing inherently wrong with that. What is alarming for news wonks like myself is that these are problems any social news service could fall victim to. The rhetoric Digg espouses is common: Your peers will be the editors, they argue–this is an age of media for the people, by the people! But such lofty ambitions/grandiose marketing claims are often undermined by very human failings. Some users game the system, while racial, economic or gender-based demographic biases among the users affects what news gets pushed to the top of the heap. 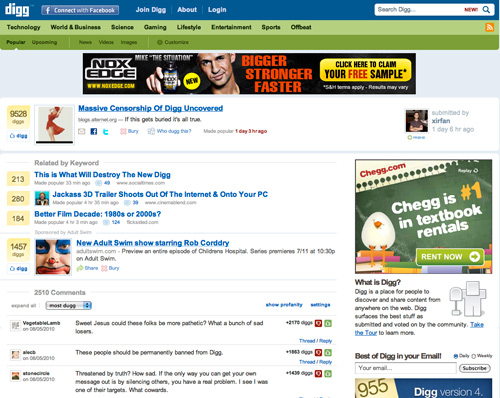 Gaming is an ever-present problem, not only for Digg, but any online service that tracks mass user activity to determine relevance. (Remember the Google bombs of years past?) Improvements to algorithms–and occasionally some quietly-placed human editors–have made it harder to game these systems, but as this latest Digg controversy demonstrates, it’s still possible for an organized campaign among users to undermine a purportedly democratic social network.

Interestingly, Digg’s upcoming version 4 will take cues from Twitter and Facebook, shifting the focus to items that your personal network is sharing and voting up, instead of the user base as a whole. It’s an aggressive move, made not only to mitigate the effects of gaming, but also to make up ground lost to Twitter and Facebook. But this model presents another potential downside to news selected by our personal social networks, the dreaded echo chamber. Proponents of the echo chamber theory argue that when we rely on our own online affinity groups for our news, we encounter fewer conflicting or challenging viewpoints.

Are these problems with actual solutions, or merely the cost of doing business in the new media world? Is it possible to run a single broadly democratic social news site without being undermined by gaming or demographic bias? Can we self-select our sources without entering an echo chamber? The debate is fierce: engineers argue that better algorithms can overcome user shenanigans. Some dispute whether the echo chamber exists. And free-market advocates will state that if Digg doesn’t serve certain groups, competing services will arise to fill the need.

I’m optimistic about the user-curated future of news, but I find these questions difficult to untangle. Attempts to game the systems are usually thwarted, whether by the engineers or good old-fashioned journalism, like the aforementioned Alternet expose. The second and third questions prove more vexing. From my own anecdotal experience, the news and opinion I get from the 600 people I follow across various social networks is consistent with my general political sensibility, leading me to suspect there is some truth to the echo chamber theory. More alarmingly, I’ve yet to see a social news site that caters to a marginalized group reach the critical mass of users that is necessary to maintain momentum and user engagement.

One thing is clear: as I’ve covered in previous posts about Flipboard and Google Reader, socially-curated news feeds aren’t the future, they’re an integral part of the media world we already live in. And if we are all now editors, we all have to be ombudsmen as well, constantly asking these tough and uncomfortable questions about how and where we’re getting and sharing our news.