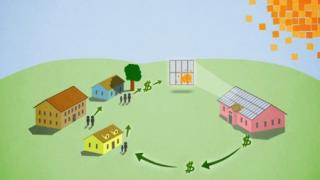 This post was originally written by Benjamin Margolis and posted on Mosaic.

It sounds great right?  “Community Solar” – two powerful words that get solar enthusiasts excited; but what does it mean?  It turns out it means different things to different people.  The Department of Energy (DOE) commissioned a report last May to dissect the various models and designs for community solar as Community Solar has transitioned dramatically over the past few years.

Previously, Community Solar was linked directly with the Solar co-op model where groups of individuals get together to lower equipment costs.  As exemplified by One Block Off the Grid (1BOG), a business initially designed as a mass solar co-op. They are shifting their model to a brokering service, and the co-op model is shifting to become Community Solar.

Community Solar is now conventionally viewed as grouping investments into solar projects to achieve financial returns or lower electricity bills. According to the DOE report, there are three main models based on ownership.

1.      Utility – Where the electric utility installs solar on buildings and allows customers to invest directly.

The Utility model involves a utility enabling its customers to directly invest in solar projects and in turn supply project returns to customer bills.  One of the more prominent examples is the Sacramento Municipal Utility District (SMUD) Solar Shares Program.  In this program, ratepayers pay a monthly charge based on the kW of solar funded, and the energy created from the solar farm shows up as a credit on their bill.  Similar programs include Tucson Electric Power’s Bright Tucson Community Solar program, and United Power’s Cooperative Solar Farm program.

The SPE model involves combining investments from community members and providing returns or on-bill credits.  While it sounds relatively simple, this model is complicated by tax credit issues associated with theInvestment Tax Credit, but several groups have been able to work around this issue.  In many ways Mosaic is a good example of the SPE model, allowing investors to purchase an interest directly in a project. The Clean Energy Collective, LLC (CEC) based out of Colorado works closely with utilities to allow LLC members to receive on-bill credits for solar energy generated.  This model is still expanding with changes in regulations and incentives such as virtual net metering; so be on the lookout for new opportunities in your area.

3.      Nonprofit – Where a nonprofit offers investment in a solar project to their donors or members.

The Nonprofit model can either be used as an organizational tool to collect donations or to feed benefits to members. A couple of successful projects include the Winthrop Community Solar Project in Winthrop, Washington and the Solar for Sakai project in Bainbridge Island, Washington.

So what does this all mean for you?  Community Solar is allowing people that might not own real estate or have access to sufficient sunlight to go solar; 75% of Americans cannot get solar on their roofs.  There are plenty of ways to get involved and more are constantly being developed.  So, take a moment to look up potential investments or talk to your neighbors; the best solar resource might be just around the corner.

Ben Margolis is currently an MBA Candidate at UVA’s Darden School of Business where he is concentrating his studies in finance and sustainability.  Prior to pursuing his MBA, Ben worked at SunEdison designing and managing commercial solar projects from California to Abu Dhabi.  Ben is a strong believer in the power of crowdfunding, especially as it applies to solar project financing.