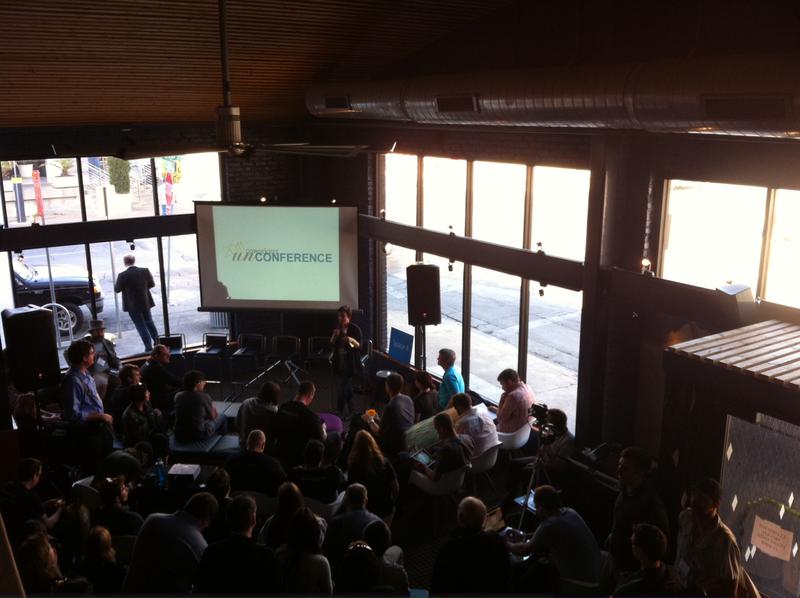 In advance of the South by Southwest Interactive Festival, coworking managers and members met for a Coworking Unconference organized by Loosecubes on Thursday to discuss the future of coworking spaces. In his opening speech for the closing panel “George Jetson is my Coworker: The Roles of Coworking Beyond Tomorrow”, moderator Alex Hillman of Indy Hall declared that coworking is “all about ‘fuck your problems, here are some solutions’.” With over 700 coworking spaces worldwide, they’re more than just a place to lay your laptop. Coworking spaces are incubators for solutions to the many challenges freelancers and mobile workers face. Some takeaways from the event:

Running a coworking space can be a scalable business.
During an opening plenary speech, Iris Cavanagh of Nextspace discussed the company’s recent infusion of $425,000 from investors. Nextspace, with coworking locations in Santa Cruz and San Francisco, and three new locations set to open in Silicon Valley and Los Angeles, must contend with remaining economically viable without losing sight of its unique community or core values. Cavanagh said, “Spaces need to be sustainable. If you, as a coworking manager can’t sustain yourself, is your business really profitable? At NextSpace, money comes almost solely through memberships,” Kavanagh said. “You have to sell the memberships at a level that allows you to keep the door open.”

There are diverging visions for the future of coworking.
During the final panel, Steve King of Emergent Research and other panel members debated whether coworking spaces should try to scale or if they should primarily operate to serve the community. King spoke to Emergent’s research into the future of coworking as an industry, asking, “Is there a consistent business model that can scale? I think that for it to reach the potential we think it has, it has to generate enough revenue to attract people to maintain the facilities.” Angel Kwiatkowski, Madame of Cohere, stated that for some, scalability is not the primary concern. “I want to live in a world where we don’t have to scale our business,” Kwiatkowski said. “I don’t need to make a ton of money, I don’t need to expand, and I want that to be okay. I don’t think the current way that business is being done is that great.” Julian Nachtigal of San Francisco’s pariSoma noted that coworking spaces needed preserve their culture first. “The biggest fear,” Nachtigal said, “is what could happen if the focus is on scalability and money, not community.”

There is no single type of coworker.
Panelists spoke to the wide variety of professionals using coworking spaces. Even though coworking predominantly remains white, male and tech-oriented, panelists observed that this is changing. “Some of the most surprising and innovative groups have been nonprofits,” Nachtigal noted. “We’ve also had some food cart vendors reach out to us recently. They themselves are a community, and they need office space too.” Kwiatkowski found that a considerable number of coworkers are not freelancers, but actually corporate employees working remotely. “It seems obvious now, but nine months ago the most surprising members to me were remote workers,” Kwiatkowski said. “I never reached out to them or mentioned them, but remote workers make up about a third of my membership.” King noted that Emergent’s research has found that lawyers, traditionally conservative and concerned about privacy, are joining coworking spaces, demonstrating that it is attracting an increasing number of workers from new and unexpected professions.

Sharing space creates new opportunities for workers and communities.
Coworking spaces lead to increased job and collaboration opportunities for members. King observed that “one pattern that’s consistent is the role coworking plays in community and connecting people who might not otherwise be connected. One of the things you see across the economy is the more points of connection, the more things happen. As you connect more people, innovation happens.” This is borne out by research: in a survey of European coworkers, 87% of responders said that they had started new ventures with people they cowork with. Shareable’s publisher Neal Gorenflo considers coworking spaces to be representative of a greater cultural and economic shift. “I look at coworking and I think it’s one instance where the values of net culture–open collaboration and sharing–are manifested in a physical space,” he said. “It becomes the basis for the creation of a new economy. They are a crucible where we can reinvent work and the economy.” During a number of breakout discussions that addressed topics such as coworking as a form of municipal economic development and regional farm networking, attendees brainstormed ways in which coworking spaces can serve as a platform to improve their larger communities.