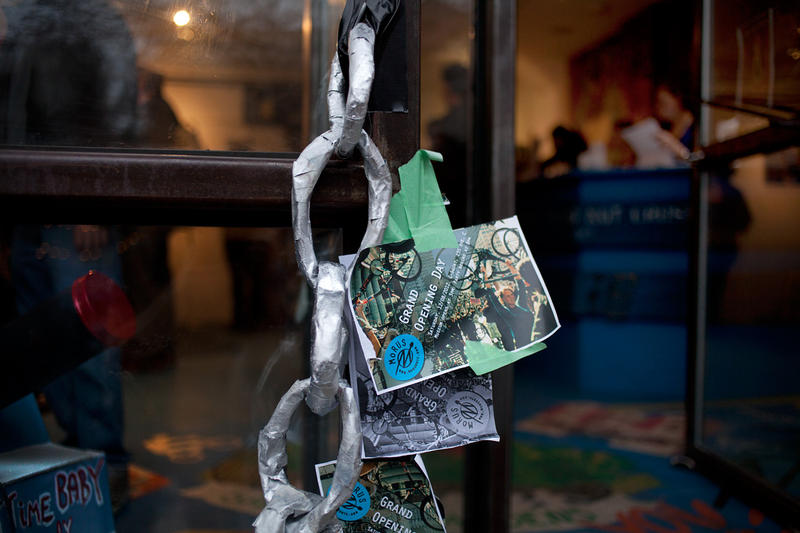 Earlier in this summer I visited the Museum of Reclaimed Urban Space (MoRUS) as it was under construction. Last Saturday the museum finally opened, but the time between visits was no picnic.

While the build crew of about 60 volunteers was putting the finishing touches on the museum, a burst of water made its way up Avenue C, flooding the half of the museum located in the basement. While volunteers like Bill DiPaola from Times Up! were able to rescue much of the photos and archives, the walls of the basement and much of the carpentry work was ruined. For many, it seemed as though the MoRUS project was literally sunk.

Squatters, however, are used to rebuilding after catastrophe. The Lower East Side squatting, urban gardening, and general urban reclamation movement came into its own in the economic despair of 1970s New York, and continued to struggle for survival through Giuliani’s hard-line 90s. Although they had never faced a challenge quite like Sandy, MoRUS and C-Squat were well prepared to repair—and not just the museum.

“Our opening was postponed for nearly a month, but in the mean time MoRUS became a community meeting space for people in the neighborhood,” said volunteer Nicole. “The first day after the storm squatters from C were out providing food and barbequing for the neighbors on the sidewalk.” 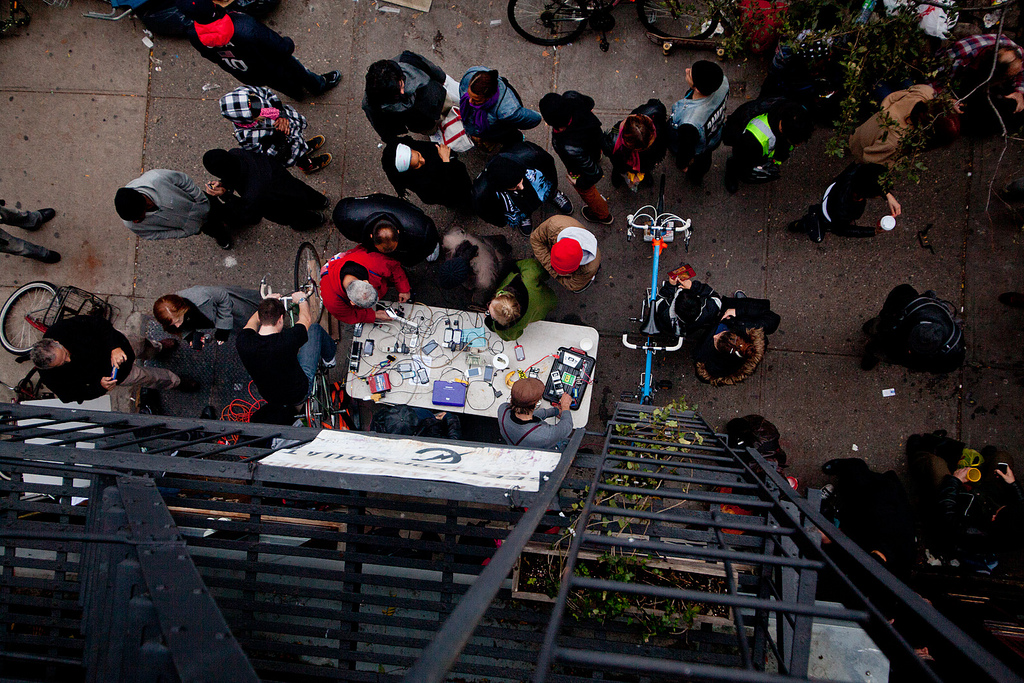 As the days went by in the aftermath of Sandy, neighbors came to MoRUS to drop off food that was going bad in their powerless fridges, charge their electronics with a bicycle-powered generator, and organize with their fellow Lower East Siders on how to clean up and support each other. “This all happened three days before Red Cross and FEMA made it. We were the first responders. That’s why we’re here,” said Nicole.

At the same time, MoRUS volunteers scrubbed the basement after it drained. The installations were rebuilt, along with the damaged carpentry. The walls had to be opened-up and the sheet-rock replaced. The procedure, which would have been impossibly expensive if contactors were hired, saved the museum and the historical building both. 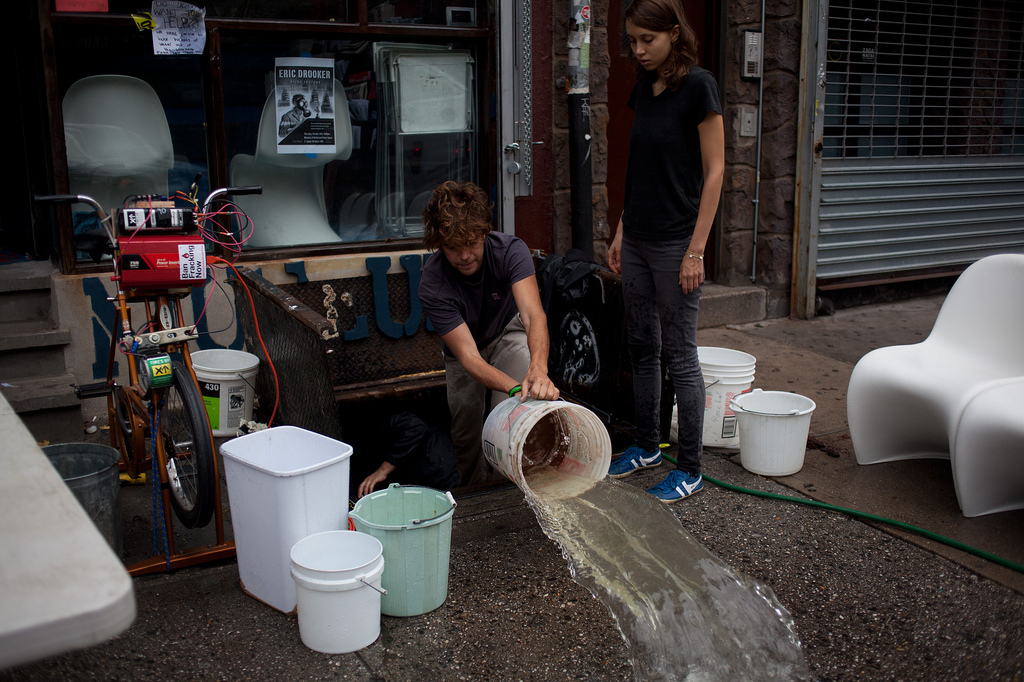 They were so diligent that at their opening party there was no sign whatsoever, besides a looping video of volunteers literally bailing out the basement with buckets, of the indoor swimming pool the basement had been just a month earlier. A truly motley mix of former squatters, local punks, radical gardeners, lifers, and recent-comers to the LES alike found themselves mingling in the museum space. They nibbled on donated fancy cheese and olives, drank wine and beer, and looked at a photo timeline of decades of protesters squaring off with police in reclaim the streets actions, critical mass bike rides, and squat defenses. In the basement, one corner is dedicated to Occupy, where the original Zuccoti Park sign prohibiting camping is on display. Another corner contains an archive or radical ephemra, including anachist newspapers from the 80s. 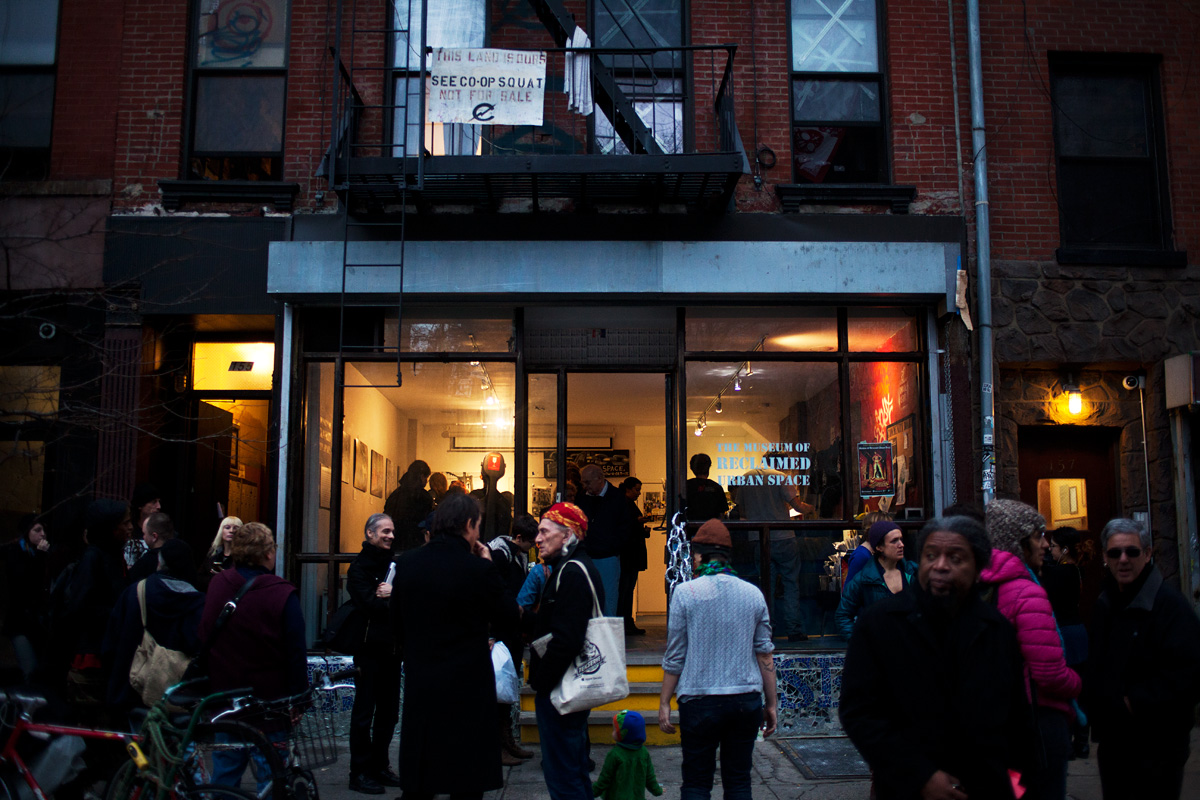 Some of the attendees became so caught-up in the spirit of the museum that they volunteered themselves to help with the party. As I talked to volunteers Nicole and Byron, a woman stylishly dressed in a black feathered jacket and bowler hat interrupted to ask if there was any work that needed to be done. I saw her a few minutes later tending the downstairs bar.

In C-Squat’s famous show-space, now occasionally lent to MoRUS, veteran squatters gave talks and performances celebrating some of their favorite memories of the neighborhood. In a slideshow by performance artist, cartoonist, illustrator, and MoRUS tour guide Fly, she showed the work she put into rebuilding Glasshouse, an early 90s squat. She explained how they built the house step by step, from nailing in the floor (“It’s good to have a floor in your squat, it makes it much easier to do stuff.”) and replacing the plumbing and electricity to pouring the cement in the basement. She showed how parts of the building were made from lumber reappropriated from blue NYPD barricades. “We would call for a protest and scream and chant for a bit, then wait until the police left and take their barricades,” she joked.

One audience member yelled out, “What didn’t we make with them? They were like scotch tape!”

Next, she explained the struggle to save Glasshouse from eviction, and the community meeting at Cooper Union where hundreds of squatters and their supporters rioted when city officials prematurely shut down public comments.

While today the Lower East Side today is nearly squat-free, the skills Fly and her squatter cohorts developed in the early 90s continue to benefit the persisting community of reclamation and resistance that MoRUS celebrates. “The way things happened in the 80s and 90s can’t happen again,” Fly said. “We’re not here to mimic it, we’re here to adapt to the new ways we’re being governed and restricted. This is a living museum that encourages progressive action. So many tenants feel they are powerless because landlords have control over them. Having a mindset that you can be proactive, this what this space is for.” 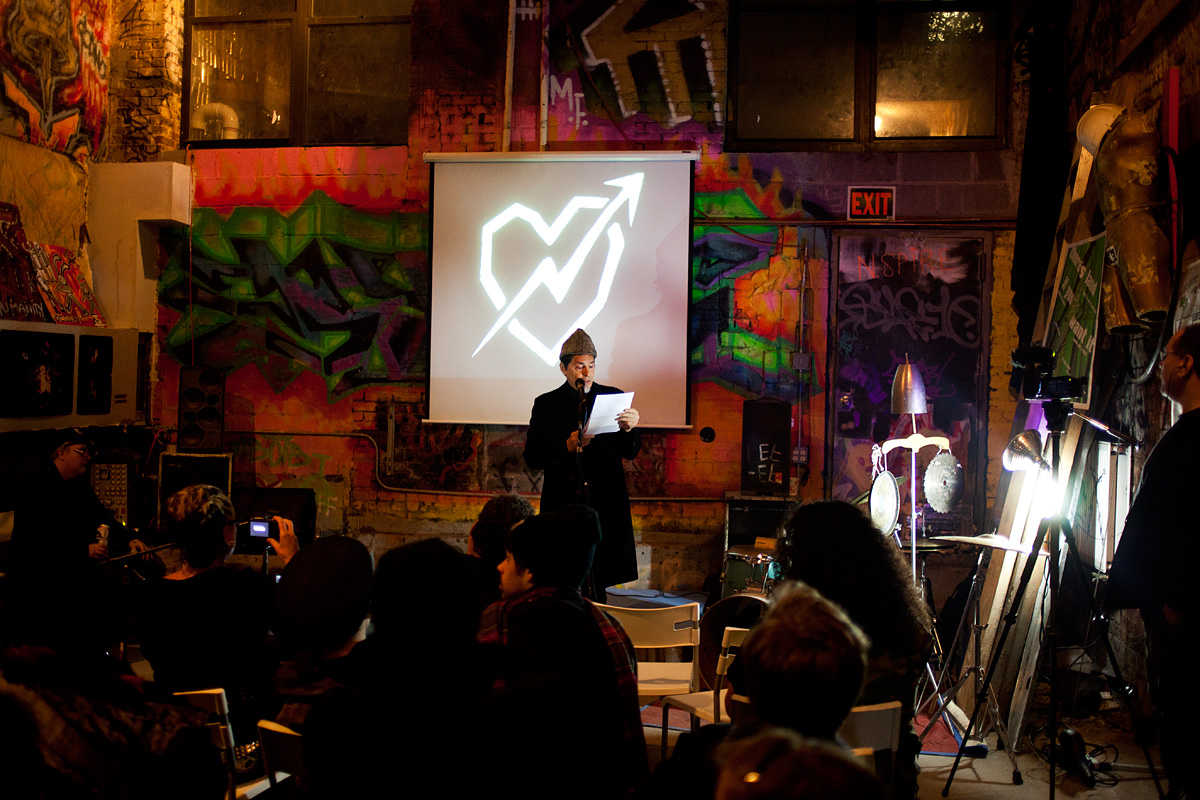 Another speaker included guerilla gardener Adam Purple, who reminded the audience of the thorniness of the neighborhood’s political history when he criticized City Council member Rosie Mendez’s roll in the opening of the museum. Parodying a ribbon-cutting ceremony, she cut a duct-tape chain lining the door with bolt-cutters, but she was “one of the most instrumental people in the destruction of the Garden of Eden,” said Purple, elaborating that she swore under oath that the grounds were booby-trapped with barbed wire. In fact she was referring to the thorns of berry bushes, Purple claimed. 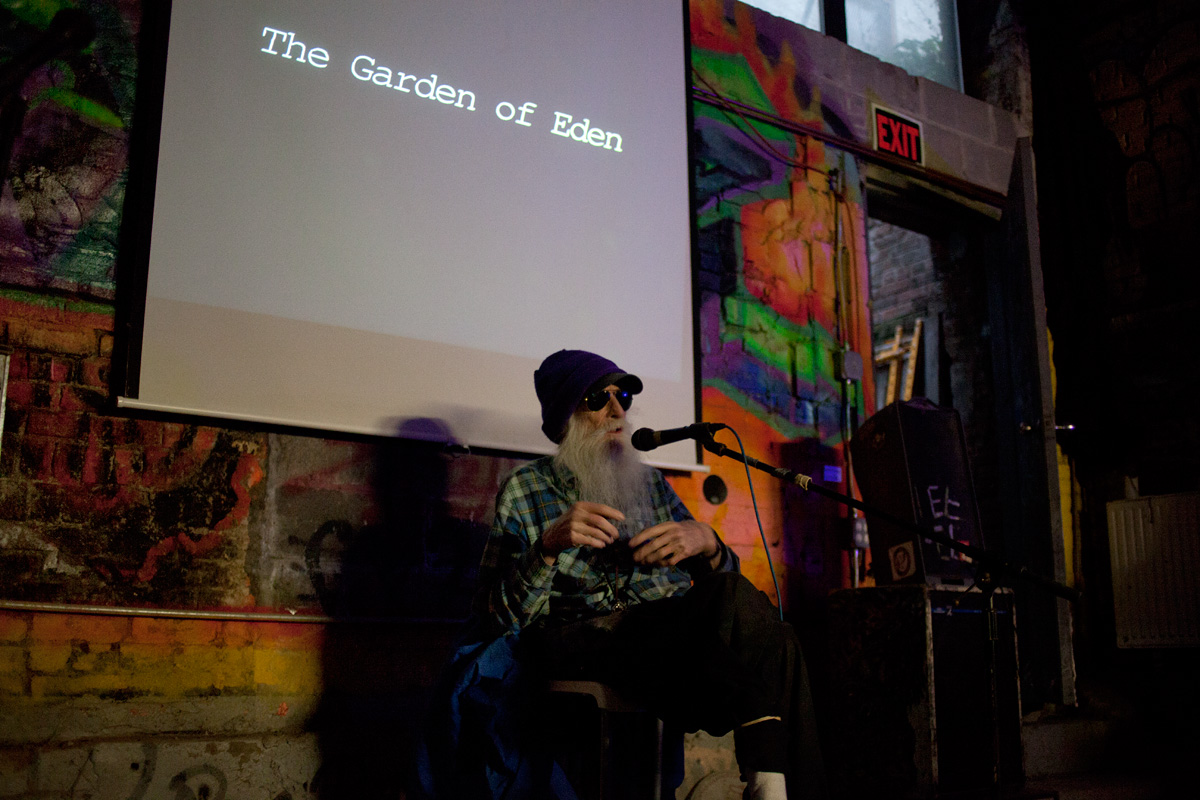 Following the speakers were stunning musical and spoken word performances from Mac McGill, Banji, and Pete Missing, leading into a sermon by Reverend Billy and a dance party kicked-off by the radical marching band the Rude Mechanical Orchestra. While there was a feeling of nostalgia to the revelry, the party was no historical exhibit. As one older attendee told me, “This is like the kind of scene I remember from the old days of this neighborhood. Lots of people getting weird, and partying all night.” 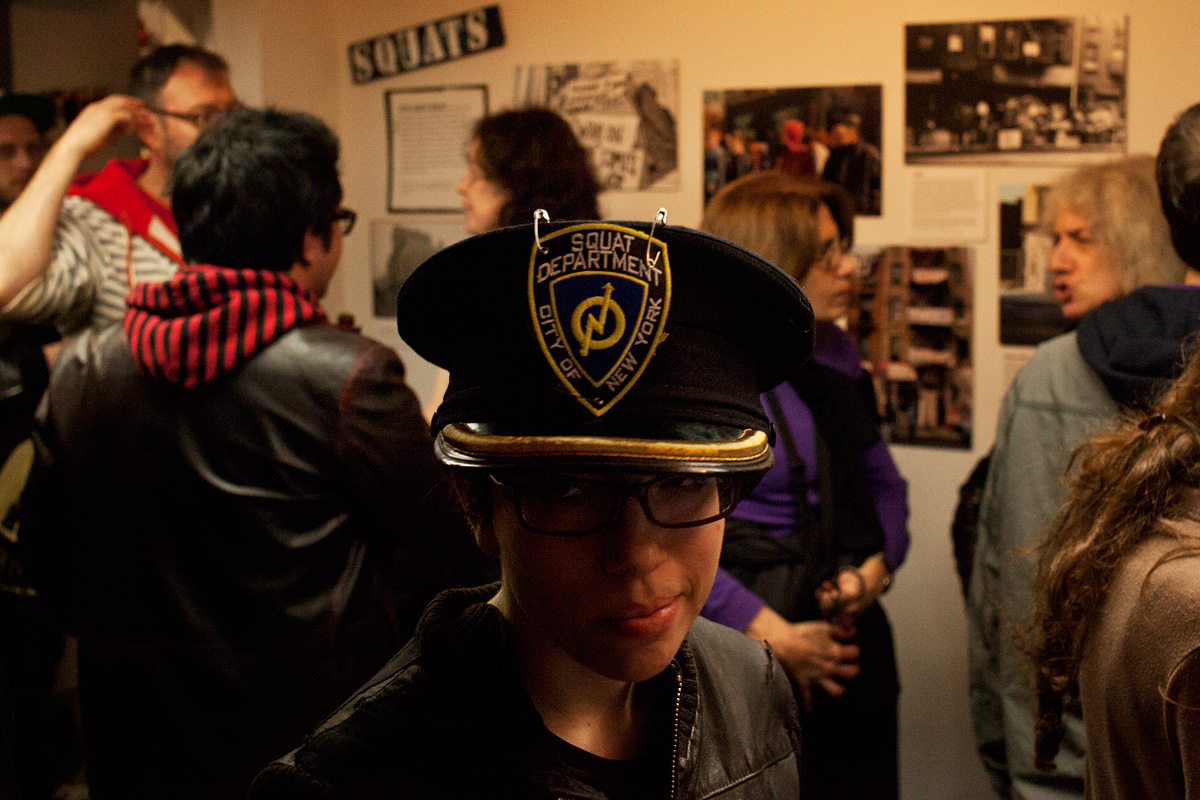 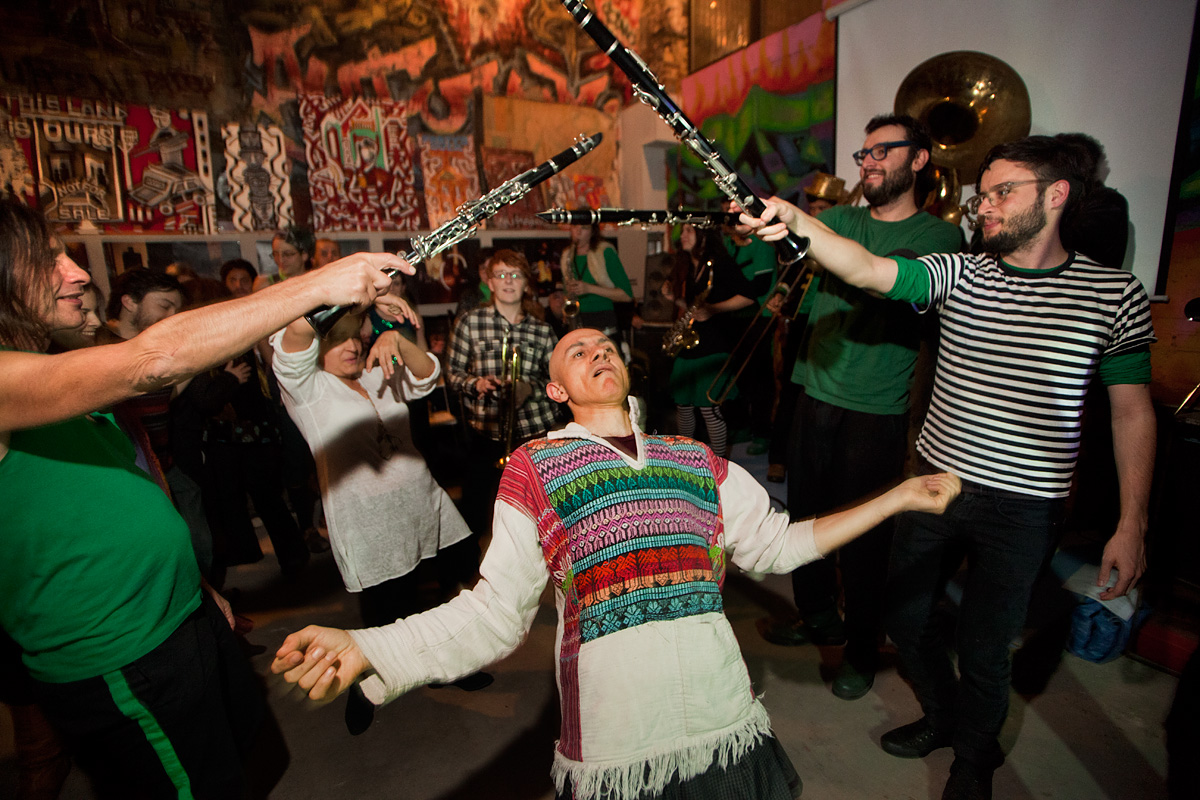