Urban Innovation Requires a Hackathon for Everyone - Shareable
Skip to content 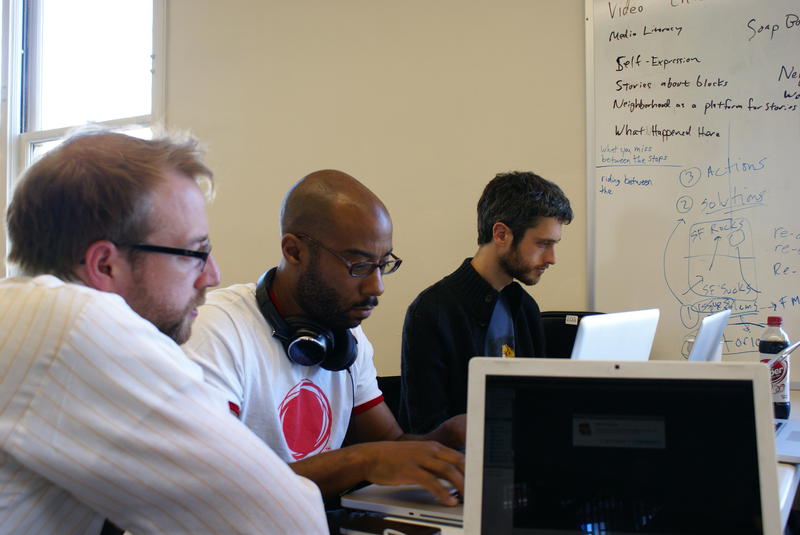 As their name suggests, the Grey Area Foundation for The Arts (GAFFTA) understands that the best solutions are not black and white, they come from the gray area – the space of overlapping interest in common problems and solutions. As part of their Summer of Smart series, GAFFTA created what they called a “Hackathon for Everyone” to unite urbanists, artists, journalists, scientists, communicators, business and civic minds, and more to join leading developers and designers in prototyping and building ways to improve life for all citizens of San Francisco – and eventually, beyond.

The concept is both simple and daunting – During the Hackathon you have 24 hours to develop, design, and build a project that addresses a theme – in this case community development and public art – in a creative way. After setting the stage with great talks, participants were invited to introduce themselves and something they might want to work on. Everything from geo-mapping public art, to a game to help people understand the importance of taxes were proposed.

Next there was a mixer during which people could roam, find out more about what others wanted to work on, and choose a group. Eric Wise is a videographer who was interested in democratizing journalism and giving community members a voice through video. I was fascinated by this idea, as were 4 others that would eventually form our team. We went back and forth a bit on city problems we hoped our project could address. We decided we wanted to give people a platform to tell their own stories, instead of the negative stories usually used by media, we wanted to give people a forum to tell what challenges their neighborhoods are facing so that elected officials/foundations/nonprofits could address them directly, and we wanted to allow people to connect to their city in an inviting and interactive way. We were unsure of what neighborhood to focus on when my team member Jeremy said “we can use the bus..wait for it…as a vehicle to tell the true story of the city”. And with that, “Between the Stops” was born.

Participants were invited to stay the night if they chose to (and some actually did!) and were given $100 budget. The next day all the teams set out to work, from geo-caching, tagging, and tweeting art around the city to coding and researching census data, to doing video interviews along the 24 Muni bus route, everyone was in full gear. Many skipped the free breakfast and lunch provided by GAFFTA out of sheer desire to get their projects off the ground.

With our project in particular, I encourage you to watch the video interviews we collected, particularly the last one highlighting a community organization called Old School Café, which is a youth run supper club in Bayview/Hunter’s Point – it’s a truly inspiring video and project.

I was honestly amazed at the integrity and commitment everyone had to building their projects. It was an incredible, inspirational, and transformative experience, both professionally and personally. Below are some of my big takeaways from the weekend.

Hackathons for everyone are the future of Urban Innovation

When I first heard about the premise of a Hackathon I was skeptical. Would people actually work hard for 24 hours on a weekend? It’s not like we were competing for large sums of money or personal gain (there are opportunities to win prizes to help groups continue their work). What would be people’s motivation?

The answer, at least for me, was the palpable desire to do good for good’s sake – and to play in a world where anything is possible. The freedom to self-select a project and piecemeal it together with just your raw skills ans passion gave me an adrenalin rush that lasted all weekend. Having someone simply say, nothing’s impossible, you have something to contribute, bring all of your skills and just build, made people stay up until 3am, get out of bed a 6am, and work nonstop towards their goals. It made complete strangers feel like lifelong friends, and it spawned professional and personal connections and collaborations. I left with new friends, colleagues, and perspective to boot.

Cities and communities should be using this model to solve their challenges. For the price of food and drinks, the city now has eight viable free apps that can be used to improve city life. If the city had approached a corporation, it would have cost hundreds of thousands of dollars in consulting fees – and I guarantee you no contactor would work through the night – for free – to get a project done. Those same people worked tirelessly simply because they were given a challenge, a platform and an outlet to express themselves.

Maybe solutions don’t require a snazzy website or smart phones – but the simple act of asking people to build something instead of just talking about it is, frankly, revolutionary. Enough talk – let’s start thinking in terms of concrete action – and then, just do it.

At the end of the second day, after all 7 projects had presented, we were asked to vote to decide which project should win the hackathon. This seemed fairly straightforward and is in keeping with the hackathon culture. However, participants began to push back and challenge the notion of this being a competition. Others suggested that this was not an end, but a beginning of a super group in which each project could be wrapped into a larger experiment or platform. And almost eveyone wanted to continue working. I just found it fascinating that after people put 24 hours into building something, they didn’t want prestige or the possibility of a prize – they just wanted to celebrate and to try to work together to build even more.

With collaboration, anything is possible

The reason why this event was such a success is because it started with a simple premise: Everyone can contribute to making change. Everyone has something to bring to the table. Initially I was pretty intimidated at the idea of working with programmers and tech folks, given the fact that I can sometimes be a Luddite, and sometimes I feel like my traditional community organizing skill set isn‘t always seen as valuable in the tech world.

GAFFTA did a great job of making us all feel like valuable collaborators. In groups we came together not as “The Developer” or “The Organizer” – but as colleagues and collaborators to share our passions, talents, insight, and tasks equally. The ability to work with a developer (and in my lucky case, one of the coolest – Larry Sheradon ) as a colleague and an equal opened my eyes to a world I’ve never been privy to. I now understand that a developer can not only build a cool website, but also provide insight into the user, the project design and focus, and really help bring everyone’s talents together into a physical, tangible space. It was a perfect illustration of the power of breaking silos, and why meaningful solutions require cross sector collaborations.

Whereas at most events, if you’re lucky you get to brainstorm solutions with others – we actually brought our whole selves to the table to build a living, breathing, tangible solutions that reflected our desire to use our skills to make change. There’s no way that this could have happened without a myriad of talents and tools that only people from diverse perspectives can bring. It was the soul of innovation at work.

It seems as though many groups, mine included, are committed to taking time to develop their platforms. I think all of the projects are amazing in their own right – and I hope you’ll take a look and provide feedback on what speaks to you.

For more information on GAFFTA’s Summer of Smart and their upcoming Hackathon for Everyone events (there are 2 more!) visit their SOS Website.

And for another take on this event, check out The Lemonary.