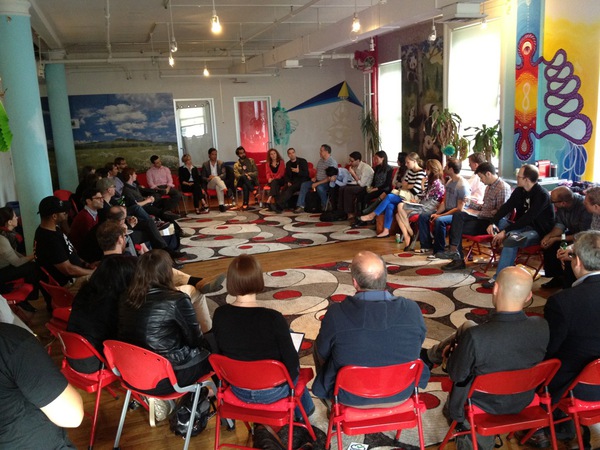 When I think of sitting in a circle of chairs filled with mostly strangers eating free pizza and talking about trust, I think of a support group. But last week I found myself in just such a situation, and the folks facing each other weren't talking about their problems per se, at least not just their problems. I was at the T8 Trust Summit meet-up with some of the industry leaders and brightest entrepreneurs of the New York collaborative consumption community.

We were at the meet-up space to talk about trust, specifically the trust between sharers in a collaborative consumption network. After chatting over beer and pizza, we sat around to figure out why people are willing to lend their most treasured possessions, even their homes, to unknown folks from the Internet. Just as interesting is why and when they're not.

The agenda was relatively open, we had a few what you could call "anti-panelists" on one side of the circle who provoked discussion, and the rest of us would chime in whenever we felt like it. Anthony Marinos from Loosecubes (office sharing network) spoke about how trust affects his company's users (they place freelancers in unused office space) in a few ways I hadn't thought of. First of all, Loosecube users looking to get placed in an office space often are willing to pay to avoid the possible trust insecurities that come with working in a coffee shop. Someone overhears your million-dollar idea and you're toast. But offices with open space are worried the same thing! What happens when their competitors start sending fake Cubers to overhear meetings? Loosecubes, he said, exists and functions to connect people across that trust gap.

Odile Beniflah was on the panel talking about carpooling.com, a site that tries to lower the barriers to ride-sharing on the go. Maybe it's the legacy of the Manson Family (okay, it's almost certainly the legacy of the Manson Family), but ride sharing has been tied up with issues of trust and fear in America for decades. Odile made the point that carpooling has been much more successful in Europe than in America so far, but that economic conditions, environmental concerns, and a more receptive cohort of young people indicate it will be bigger in the near future. Though a lot of people in the circle quickly turned to imaginary assaults and murders, Odile brought us back to reality: that never actually happens to carpoolers. At least it hadn't yet, not though a million rides a month (carpooling.com's current volume). And who says you can't trust drivers?

Some of the most interesting and surprising points of the night came from Cameron Tonkinwise, a design professor at Parsons and friend of Shareable. Against the binary system of trust-not trust, Cameron suggested we had to think of trust in collaborative consumption relations as a management of risk. There are different things you trust different people to do, he said, turning trust into a linear scale (like a credit score) doesn't really reflect human character. Risk is part of any new experience, and collaborative consumers aren't always looking to eliminate it altogether. A couchsurfing or ride sharing service that eliminated all possible risk of a strange interaction wouldn't be as enjoyable as the ones that do exist. You can't trust without risking that trust being broken, otherwise it's just knowledge. Not knowing is part of the fun.