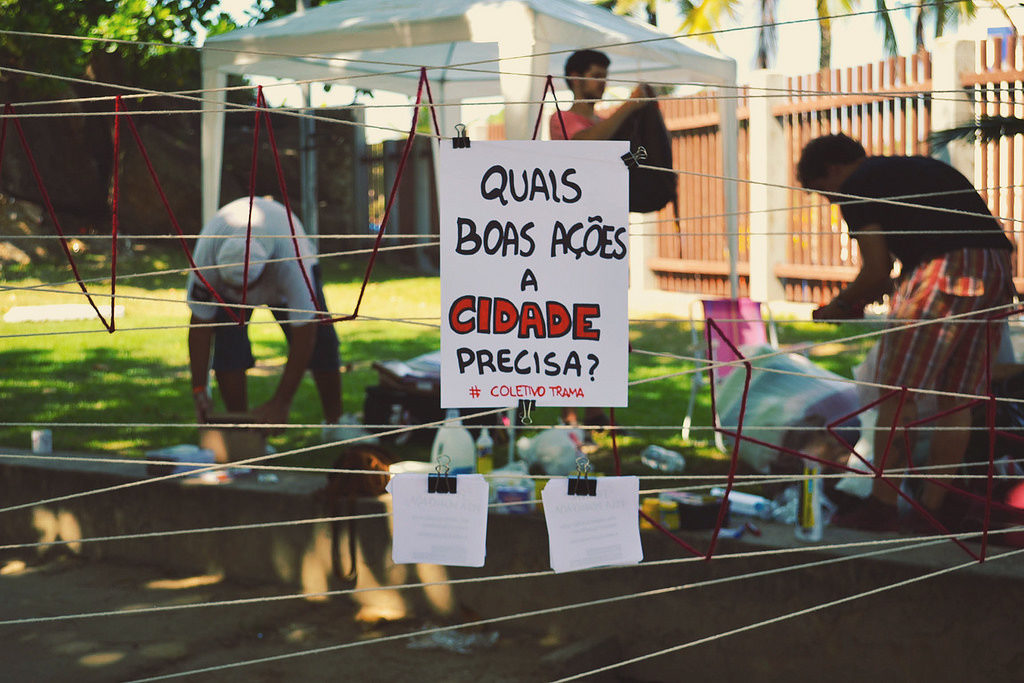 In late 2014 a design project at PUC-Rio university led five students to the street in Rio de Janeiro to restore an idle square by opening it for people collaboration and creativity. They received a high grade for the event and it was the starting point of Trama, an open collective that acts as a catalyst for collaborative initiatives in the city of Rio de Janeiro, Brazil.

Trama is building itself around a belief in the power of collaborative initiatives that mobilize people, places and actions to create more impact. They do this by organizing outdoor events to revitalize idle spaces using creative arts and with a collaboratively created online platform to facilitate shared initiatives. Trama is a platform, but it could also be an open meeting, an urban intervention, a creative initiative, an interactive dynamic.

The team has grown to a dozen people in less than two years, bringing together friends with different areas of expertise who gather for walks, swims, meals and to plan how to foster a more participative and integrated city where any person can be an active agent.

Shareable connected with Rebecca Barreto and two of the co-founders, Gabriela Ornellas and Felipe Faillace Salazar, to learn more about this determined collective of young people engaged in strengthening the voice of independent, collaborative and creative initiatives for transforming their city for better.

When asked how Trama is changing their lives, Rebecca says, it´s about “connecting with like-minded people,” while, for Gabriela and Felipe, it was a way to experience a new "sharing reality." All agree it changed the way they see the world; what was once a utopian idea has become very tangible because they, along with others around the world, are making it happen.

The work they are doing is both influenced by and a response to the socio-political situation in Rio de Janeiro and the country of Brazil as a whole. The general population experiences a constant challenge to receive basic services, including education, health and safety, while facing a presidential impeachment on the grounds of alleged corruption, the growing evidence of a parliamentary coup, and an extended financial crisis. 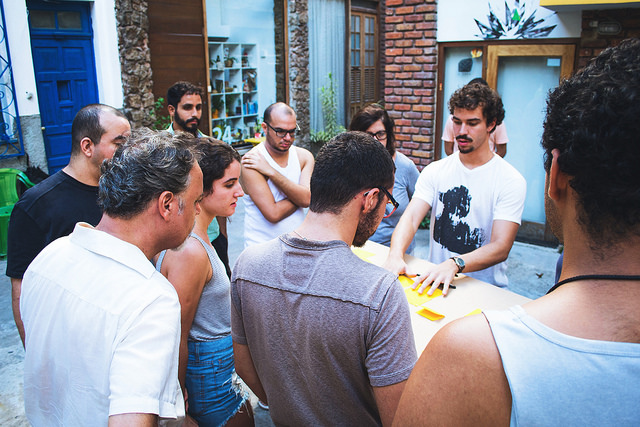 Gabriela: For their final project at the university, the co-founders needed to create an event in an idle square of the city. We had top grade for this work and maintained the project since it was an important creative gathering for the city. That was the first Trama event.

Rebecca: Trama’s founders noticed that several independent and creative initiatives happen all the time throughout the city in different spaces, not articulated or integrated. Also, that there are a lot of idle spaces in the city. So why not bring the people who run these initiatives together? [We can] occupy and use these idle spaces in order to get stronger and gather more people and money to create a larger impact.

You say 2016 is "the year Trama went out to the streets." What actions have you been doing and what is in store for the second half of 2016?

In a year and half, Trama accomplished some big achievements, such as collaborative occupations in idle squares and at the oldest public park in Brazil, with more than 15 collectives and 5000 people participating with music, art, theatre, capoeira and more. We developed interactive city interventions, pop-up coworking in a public museum, and hosted open meetings to get to know and mobilize people for collaborative projects in the city and to bring in new contributors to our collective. 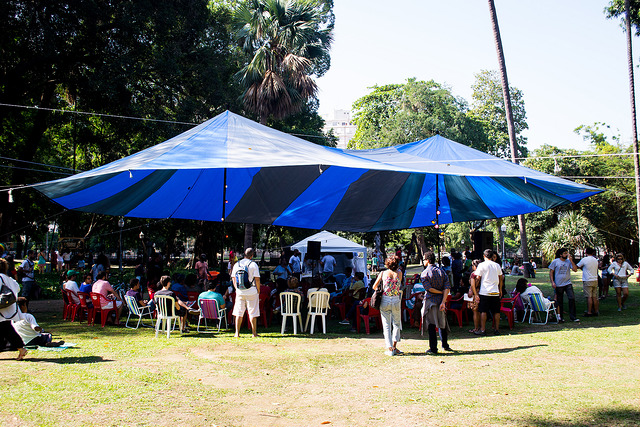 Rebecca: We believe we´re going to get in contact with more people by having more outside projects and street events and we are looking forward to building our platform. We´re putting individuals, collectives, NGOs and others together for idle space revitalization to make a better city. Right now there are a lot of  foreigners from Europe and USA around because of big events like the Olympics and due to the cheaper currency, so we aim to get into the streets to touch more people. We also plan to have the MVP (Minimum Viable Product) of our open source platform ready in the near future. To do this we are organizing a hackathon in late June (Hackatrama) in a partnered coworking space, Templo, following the MapJam we organized in April (MapJamRio). We are looking for a shared world, so we though, “Let’s ask people if they want to join us to build a platform that can cause a good impact in the world." We were surprised that 80 people registered for Hackatrama in only two weeks, from developers, designers, architects to a dancer. Note: This event takes place on the 25th of June in Templo Coworking.

Felipe: Our platform will be open source, totally available for those willing to build it together and use its codes.

Gabriela: It's a very intense year with a major focus on enhancing our presence online with the platform to reach more people.

How is Trama involved in the city of Rio de Janeiro and how is your work affected by the present socio-political context of Brazil?

Rebecca: Trama has two focuses: the team facilitating collaborative initiatives in the city and the platform built in a collaborative way that will be its digital arm. This can be taken to other places hoping for people to use it for the best.

Gabriela: It's about connecting parts together—everything can be a part: individuals, NGOs, urban collectives, a person, a group, companies—anyone who wants to meet people with similar goals to be achieved collaboratively can be connected in our platform.

Rebecca: We put all these people with similar purposes together. We are paying attention to what’s happening in our country, speaking with each other and showing on our Facebook page. We´re not taking part in any specific political parties. Brazil doesn´t have money for education, teachers, infrastructure, etc., so we are supporting people who want to create initiatives like occupations of closed public schools being led by kids, teenagers and people willing to give free lessons. We bring people together so they can talk and think together in order to have more social impact in their actions instead of doing it alone—creating a stronger network along this scene. They take Trama´s name with it. 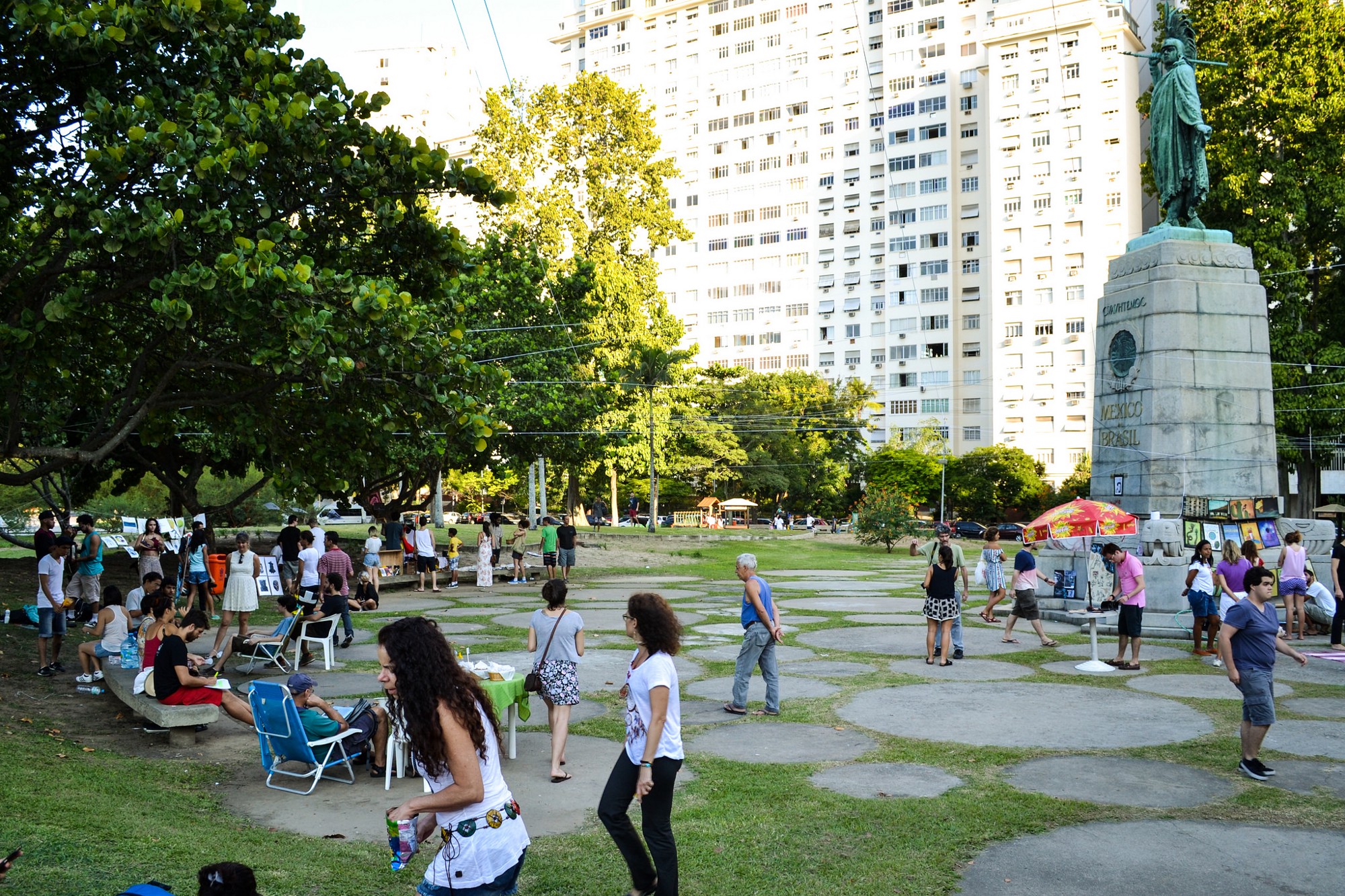 Trama's core team grew from five to 12 in the first year. Who is behind Trama and how are you working as a collaborative while financially sustaining yourselves?

Rebecca: After asking a friend and co-founder about the project and discovering it was open to others who were willing to join, I was really excited to apply my skills and available time to support its growth. My main motivation to join came from seeing that the sharing economy is real, that it´s possible to build a different society and better economy by gathering with other people and creating it together—first working locally before spreading out into the world.

Felipe: The way we organize is spontaneous. It´s very difficult to merge all the different visions, ideas, emotions and we have many ways to deal with this. When we receive a project we ask three questions: Do we have time for it? Are we giving up on something because of it? Who on the team wants to work with it? People are working on projects because of their own interests in developing it. In Trama you jump into something because you want to, not because you need to. People share what’s going on and even ask for help and ideas in the weekly meetings. There´s an “owner” of each project who can ask for help or collaborators.

Rebecca: It´s very easy now. Initially we decided to have work groups, but it was too similar to a corporate structure. We are transitioning, learning and testing collaborative tools like sociocracy.

Rebecca: One of our main challenges is how to make Trama a sustainable project for the team. How are we going to pay our bills while doing something good for the world, without having to put a need for money ahead of our ideas? We´re thinking of using the platform network and offering workshops to involve more people in the sharing economy experience. Engaging participants to commit and keep with a project is also a challenge.

Felipe: We work on Trama from our hearts but as life goes on we want to be independent. We need to work on something that has meaning for us but at the same time that gives us stability. So the main challenge is working on a sustainable and profitable project. We want to keep doing things from our heart and get paid for that. We grow in a network along with other organizations and startups that face the same challenge and we believe working together is the way to overcome it.

Beyond 2016, what does the future hold for Trama?

Felipe: My vision is that this project will grow exponentially and include others that support our idea to bring this collaborative, cooperative, sharing city way to the world. I believe in Trama as a platform and tool for people to use to revive their own lives, communities, neighborhoods, and cities. [They can] use this growing creative economy, with art and culture, to materialize the world they envision. This comes from my own experience in this project and has become a bigger challenge since I started getting to know a world that had previously been a mystery before.

I see in Portugal a country of unique resources, proactive people and dynamic projects. To apply and make use of the sharing economy  is a viable route to have a better quality

I see in Portugal a country of unique resources, proactive people and dynamic projects. To apply and make use of the sharing economy  is a viable route to have a better quality of life, happiness and sustainable use of resources. TPWS - Portugal is a way to leverage and connect what is already happening!