Toward Post-Capitalist Cities? Reporting Back From The Global Social Economy Forum 2016 - Shareable
Skip to content 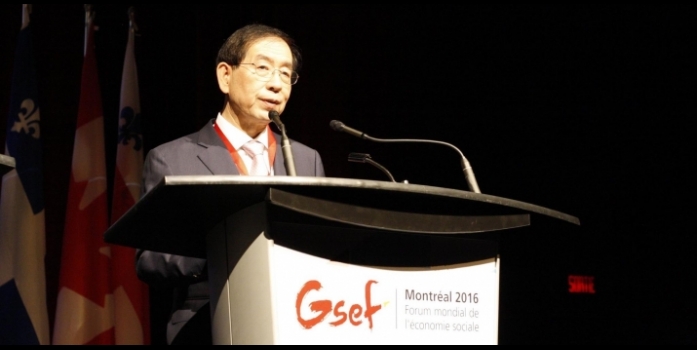 In the U.S., it’s not uncommon to think about cooperatives and non-profit social enterprise as something wholly outside the realm of conventional politics. Yet, in many parts of the world — and increasingly in some corners of the U.S. — government, especially at the local level, plays a critical role in supporting ecosystems of enterprises that are structured to put people and planet before profit.

This relationship between local governments and the social economy was the focus of the Global Social Economy Forum, which took place earlier this month in Montreal, Quebec, a province where roughly seven percent of the workforce is employed by a co-op or non-profit business and where public investment in the sector hovers around $100 Million CAD annually.

Organized as a partnership between the Montreal Mayor’s Office and the Chantier D’ Le Economie Sociale, the forum brought together over 1,300 people from 330 cities in 63 countries including more than 40 mayors.

Coming from a U.S. context, where social, solidarity, or new economy efforts tend to be very grassroots, the size and public profile of the event was truly impressive. GSEF flags lined the Boulevard Rene-Levesque and the nation’s most prominent French-language TV business show hosted an hour-long special on the social economy from the conference center.

The forum served multiple functions. At times it was an opportunity for elected officials to recount their achievements in supporting social and solidarity economies or for the announcement of new initiatives such as the C.I.T.I.E.S learning platform. Other moments facilitated exchange and learning between governmental and community actors from around the world. Still others were focused on making a statement to the international community, encapsulated in the GSEF2016 Declaration, about the importance of social economy strategies to the goals of sustainable development.

Despite the size of the gathering and it’s North American location, participation from the United States was low at fewer than 30 people.

Three representatives of local government in the U.S. participated in the forum. Alder Rebecca Kemble spoke about Madison Wisconsin’s investment in worker co-ops as a tool for racial and economic justice. Tracey Nichols, Economic Development Director for the City of Cleveland, discussed the city’s support for the Evergreen Co-op network. New York City Council Speaker Melissa Mark-Viverito addressed both the city’s investment in worker cooperatives and its leadership on participatory budgeting across the five boroughs.

Movement leaders from the U.S. (and a few Canadian friends) enjoy an evening together.

Participation from the U.S. included NEC staff, as well as representatives from member organizations and allies such as the Center for Economic Democracy, Cooperation Buffalo, OPEN Buffalo, Cooperation Jackson, the Sustainable Economies Law Center, the Democracy Collaborative, the U.S. Federation of Worker Co-ops, the U.S. Solidarity Economy Network, Magic City Agriculture Project, and the Highlander Research and Education Center, who organized a delegation of leaders from the U.S. South.

U.S. participants learned about inspiring models from around the world including:

Quebec, where the social economy does $2 billion in sales annually and has been recognized in law as a critical component of the provincial economy and culture.

Seoul, South Korea, where collaboration between the city and social economy networks has led to the creation of over 3,000 co-ops in just four years.

Barcelona, where the new, social-movement-supported administration of Mayor Ada Colau is rapidly creating a legal framework and public support system for the social and solidarity economy.

Cameroon, where more than 200 cooperative networks have been organized in villages across the nation, in addition to a network of mayors who want to promote SSE.

Bahia, Brazil, where, unfortunately, the ouster of President Rousseff poses a threat to the substantial public and community investment in co-ops and the solidarity economy.

More information of the GSEF can be found here.

Mike Sandmel is the Manager of Coalition Organizing for the New Economics Institute.  Having recently completed a course of study involving far too many outdated economic ideas and multiple choice

Mike Sandmel is the Manager of Coalition Organizing for the New Economics Institute.  Having recently completed a course of study involving far too many outdated economic ideas and multiple choice tests, Mike is thrilled to be working with students to advance new economic theory, grow restorative and democratic enterprises, and transform their schools into anchor institutions for the New Economy.