To Give or Not to Give: Enter the Gift Economy - Shareable
Skip to content 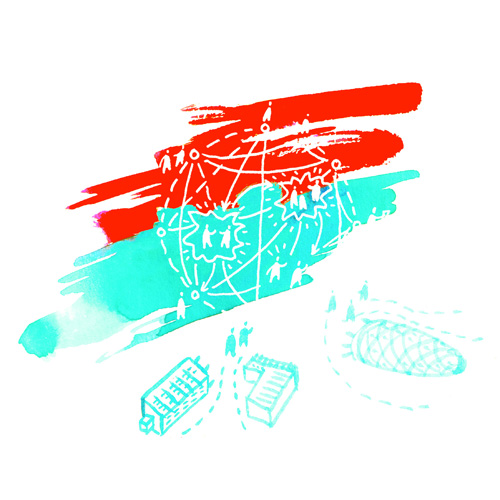 The following is an excerpt of The Serendipity Machine by Sebastian Olma with illustrations by Yulia Kryazheva.

Serendipity — value creation based on unexpected encounters — is a new trend in the world of business. Successful global players like Google and LinkedIn are introducing serendipity leaves for their employees: time they can spend outside of rigid work structure in order to find value in the most surprising places. These companies know how important unexpected encounters and knowledge exchange are for innovation.

But what if it is actually possible to build a business — a machine — that systematically facilitates serendipity? This book, The Serendipity Machine, presents a disruptive business model that is able to do exactly that. It shows how the Dutch company Seats2meet.com became a serendipity machine by implementing principles of asynchronous reciprocity, social capital, and third space. The book explains these principles, providing companies and organizations with the insight they need to start their own transformation into serendipity machines.

The construction of the serendipity machine started with a piece of furniture. When the first Seats2meet.com location went live in Utrecht in April 2007, a glass table for 20 people was set up in the lounge to provide free workspace for a new breed of entrepreneurs: independent and self-employed professionals. Previously a traditional meeting business catering for hundreds of professional users every day, the company (then called Meeting Masters) always had space available for extra people. The new idea was to use the available space that was there anyway to attract this dynamic new group of professionals to the company’s business model. In the beginning, it was not entirely clear what would come of this open invitation. What was clear, however, was that there was an unprecedented dynamism among this new group of entrepreneurs, and Seats2meet.com wanted to invite it into their company.

But Seats2meet.com’s abundance thinking didn’t stop with free workspace. On top of that, it even offered free coffee and lunch as a way of making its open lounge even more attractive. The idea was that if you needed to provide lunch for 150 users anyway, feeding another 20 people would cost next to nothing.

The glass table and the literal free lunch opened the floodgates. The seats around the glass table filled up in no time. And people kept on coming. So more tables and chairs were added. Eventually, the 120 seats in the open lounge were being used by up to 150 people a day. This was not what Seats2meet.com had initially expected: in 2008/09, coworking existed, but it was still a somewhat marginal phenomenon. This was also around the time when cafés started to worry about the growing number of people with laptops who, many believed, didn’t consume enough and took up valuable commercial space. Plus, social media was starting to take off in a major way. So the resonance was overwhelming.

Van den Hoff recalls: “In the beginning, we had this one table with 20 seats. I mean, we thought that would be the size of this thing, the number of people we could perhaps expect. And we didn’t want to register them or anything, or make them pay for their lunch. We just thought it would be great to have this new group of independent professionals around, give them some space to work and connect, and get some liveliness into those otherwise empty spaces in return… But we were literally overrun by them.”

How did Seats2meet.com react to the unexpected magnitude of its own success? It decided to push right through the wall of conventional business thinking by remaining open to the newcomers. The team around Seats2meet.com founders Mariëlle Sijgers and Ronald van den Hoff resisted the temptation to close down a great entrepreneurial experiment by turning it into a linear business strategy. So instead of the expected 20 independent professionals a day, they welcomed the 150 they were getting and treated them in the same way they had treated the initial handful.

Van den Hoff says: “When we started, it was good old-fashioned giving away. We didn’t ask anything in return. Just to see all these people working in the open lounge was so overwhelming. The social media buzz they produced – this was all so new to us. It was simply amazing!”

What Seats2meet.com experienced at that moment was the manifestation of an archaic principle, albeit in very modern form: the potlatch. A potlatch is a ceremonial feast that has been found to be an integral part of many archaic economies. The word comes from a native North American dialect term meaning “to give away” or “a gift.” Anthropologists have long been fascinated with the potlatch, because it is the cornerstone of an economic system in which acts of exchange do not take place in a space abstracted from personal relations. In our modern economies, a transaction is sealed by paying a price, thus alienating the previous owner from the good or service. Paying the price, one might say, cuts off the previous owner’s bond with the object of exchange and also prevents the emergence of any social bond between the two parties. The potlatch, in contradistinction, is a form of exchange designed to establish a social bond between the parties engaging in the exchange. The gift is never alienated from the giver. Rather, he or she enters into a relationship of asynchronous reciprocity with the receiver of the gift. The exchange establishes a strong social bond between the parties involved in the gift exchange, obligating the receiver to repay his or her gift debt. However, the reciprocity is asynchronous, meaning that when and how repayment takes place is left to the will and capabilities of the receiver.

Of course, in the ICT sector, gift economies have re-emerged over the last few decades, for instance around operating systems such as GNU and Linux.[1] In the meeting business, though, they were unheard of. Seats2meet.com threw a potlatch because it wanted to establish a bond with the emerging group of independent professionals. And they didn’t need to be anthropologists to understand the notion of asynchronous reciprocity.

Marcel, who runs Seats2meet.com’s Strijp-S location in Eindhoven, explains: “Asynchronous reciprocity is a term we often use to describe what’s going on in the workspaces. It simply means that you stop thinking in terms of exact equivalences. My experience here at Seats2meet.com is that if you leave it to the other person to decide when and how to reciprocate, often you’re surprised at how much you actually get back.“

Culturally, this chimed beautifully with the company philosophy of Seats2meet.com’s mother ship, CDEF Holding. CDEF stands for Cada Día Es una Fiesta – Spanish for “Every day is a feast.” Seats2meet.com literally turned its open lounges into sites for daily gift-exchanging ceremonies. Every day was a potlatch. As a business, they were, of course, conscious that they weren’t just in it for the fun of it. The company certainly saw that this had potential for its business, but it didn’t yet see exactly how. So it just continued to give things away. Later on, it realized that giving things away did indeed create a particular social bond. Felix, who has worked for Seats2meet.com since the beginning, puts it this way: “We give away all these things, and this creates social capital. It means that it’s OK to ask something in return.”

In his famous book The Gift, Marcel Mauss makes the point that gifts are never free.[2] The fact that we train our children to automatically say “Thank you” whenever they receive one might be a sign of the modern compulsion not to enter into social relations via acts of giving: the thanks replaces the obligation to reciprocate. Seats2meet.com’s network potlatch started out of an intuition that this did not have to be the case, even in the world of business.

Yet accepting the gift and entering into a social relationship didn’t come naturally to all Seats2meet.com users: “In the beginning, I used to bring my own lunch, because I was suspicious. I thought maybe there was some small print somewhere I hadn’t read. Of course, there isn’t. But for me, it was a bit of a challenge to accept their ‘gift’.” (user, Eindhoven Strijp-S)

Everyone knows the saying, “There’s no such thing as a free lunch.” It’s as true at Seats2meet.com as it is anywhere else. The question was: what exactly could they ask for in return without destroying the delicate logic of the gift exchange? Could Seats2meet.com, with its users, co-create a business model that would keep up the buzz yet allow the company to profit from its generosity as well? Would it be able to invent a currency that was valid within the gift economy?

Learn how the story ends by downloading the free e-book, The Serendipity Machine.