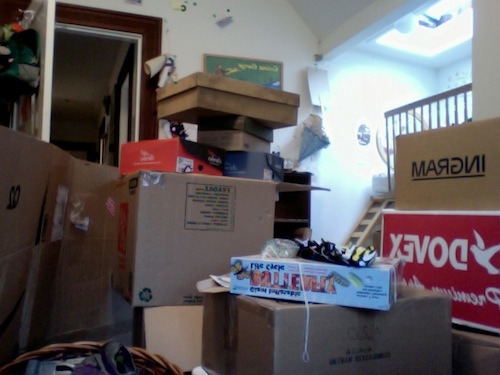 My family is in the process of moving to a new apartment (ugh), and we're facing all the usual problems of what to do with the stuff we don't need anymore. Naturally, we're trying to avoid throwing stuff away and instead figure out ways to share it. Here are three of them:

1. Recycle your paint: Seven years ago, I spent the first three days in our apartment painting–and then we stashed the leftover paint in the attic and forgot about it. What to do with it now? My wife found the answer: The San Francisco Household Hazardous Waste Collection Facility will take your paint, remix it, and then give it away for free on a first come first serve basis–some of it is given away internationally, for example to paint schools and libraries in Mexico. As far as I have been able to discover–and I could be wrong–only Portland, Oregon offers a similar program. If your community doesn't have a paint-sharing program, consider simply donating leftover paint to Habitat for Humanity, an arts program, or other nonprofit group–however, it's best to do that right after you're done painting, not seven years later.

2. Donate stuff to a school: When my wife worked in public schools, we set up an informal program of moving paper with blank sides from my office to her classroom, instead of recycling it right away. Believe it or not, lots of cash-strapped classrooms desperately need paper with just one blank side–teachers sometimes pay for paper out of their own salaries. If you know teachers, ask them if they could use any of that paper you're going to put on the curb. You can do the same for pens, art stuff, tools, computer equipment, children's books, toys, and so on. This is probably a good example of how our economic crisis provokes more sharing: on one hand, it's terrible (in an American context) that schools don't have enough money for paper–on the other hand, why should they be buying fresh scratch paper in the first place?  Wouldn't it be better even in the best of times for people to share stuff with institutions like schools, so as to reduce waste and direct cash into other areas?

3. Share it online and in person: This is obvious, I suppose, but perhaps not to everyone. We're posting on Craigslist, Freecycle, etc. to tell the world to come and get it. Plus Goodwill, used clothing stores, used book stores, garage sales–we're doing all of that. But first we held a brunch for our neighborhood friends and put prices on stuff around our house. Some things we've been selling, some we've given away. The important thing is that it gets shared instead of going into a landfill. And as we've described many times here on Shareable.net, sharing stuff both online and off also helps build community ties and makes people aware of being part of a cooperative society.

So now I'm looking for more ideas. Tell me yours: What else can we do to make our move even more shareable?