The Wheels on the Bus Go...Faster and More Fun - Shareable
Skip to content 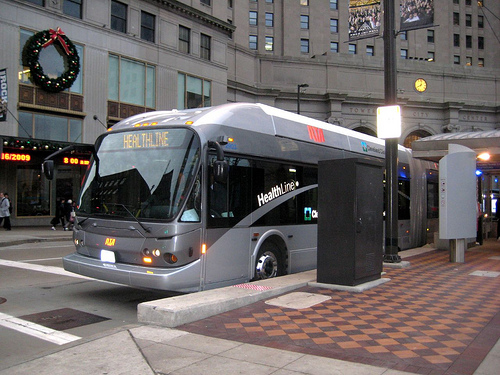 When it comes to getting around town, city  buses seem to be the Rodney Dangerfield of American transportation—they can’t get any respect despite the fact they carry more passengers each day than subways, commuter trains, light rail and streetcars combined.

Buses thus offer a key part of the solution to problems as varied as climate change and runaway sprawl yet many middle-class Americans who will gladly board a train for work or shopping expeditions don’t even consider riding a bus because it’s perceived as a slow and low-status way to from here to there.

But buses don’t need to be transit of the last resort, ridden only by people who have no other options. On a recent swing through Ohio, I saw two promising new projects designed to make bus riding speedier, more comfortable and even a little bit fun.

Cleveland has awarded buses their own exclusive lane on Euclid Avenue, one of the city’s main arteries heading east out of downtown past the revitalized theater district to the Cleveland Clinic and Case Western University—both major job centers.

A number of people I talked to expressed disappointment that the avenue was not outfitted with streetcars as called for in the original plans. Yet they did see the lane as a distinct improvement over buses getting bogged down in rush hour traffic.

The Euclid Avenue bus, dubbed the Healthline, is an example of Bus Rapid Transit (BRT)—a hybrid transit mode incorporating advantages of light rail (faster service in a lane all their own) and buses (lower construction costs).  The idea—which was invented in Curitiba, Brazil, and improved upon in Bogota, Colombia—has now finally reached North America.  More than 30 cities have built BRT lines, from Boston to L.A., El Paso to Everett, Washington.

As for the perceived low-status of buses, Dayton, Ohio, has come up with a promising answer: The Wright Stop Plaza, a snazzy and comfortable bus station downtown. Passengers can consult airport-style monitors to find out when their bus arrives and then, if there’s time, stop in at the adjoining convenience store, cell phone shop, or numerous food stands (all locally owned, no chains).

There is an outdoor waiting room for nice days and a pleasant indoor one when it’s rainy, snowy, hot or cold.  Friendly transit ambassadors are on-hand to answer questions and head-off any security concerns. Riders board their buses along a serpentine plaza that feels more like a pocket park than the typical drab transfer center.

The whole place functions like a commons where you can see your friends and feel a part of the public life of the city, which goes a long way toward making bus passengers feel like valued member of the community.