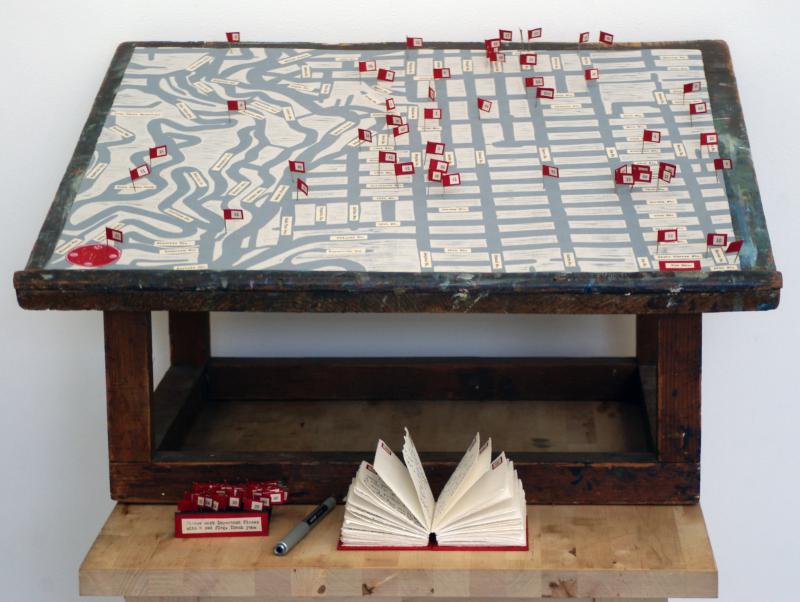 Claire Kessler-Bradner|October 28, 2009March 4, 2019
My mother is a painter, and she has never owned a home. I was fourteen when our landlord, Mr. Andersen, died. My mother couldn’t afford to buy the house, which Mr. Andersen had rented to her for next to nothing for over twenty years, even accepting art in place of rent on several occasions.
And so we moved from the San Francisco neighborhood of Noe Valley to the outer Richmond in March of 1995, just before my eighth grade graduation. After spending my high school years deep in the Clement Street fog, college on the east coast, and several years in other cities, states and neighborhoods, I returned to San Francisco last summer in August of 2008.
With help from a former neighbor, my husband and I found an in-law apartment in a Victorian only a block downhill from my childhood home. It wasn’t until moving day, contents of the Budget truck spilling onto the sidewalk, that my mother made the connection between new home and old. She stopped on the path through the garden, hand truck stacked with boxes, gasped, and said, “This is the house Mr. Andersen’s mother built.” 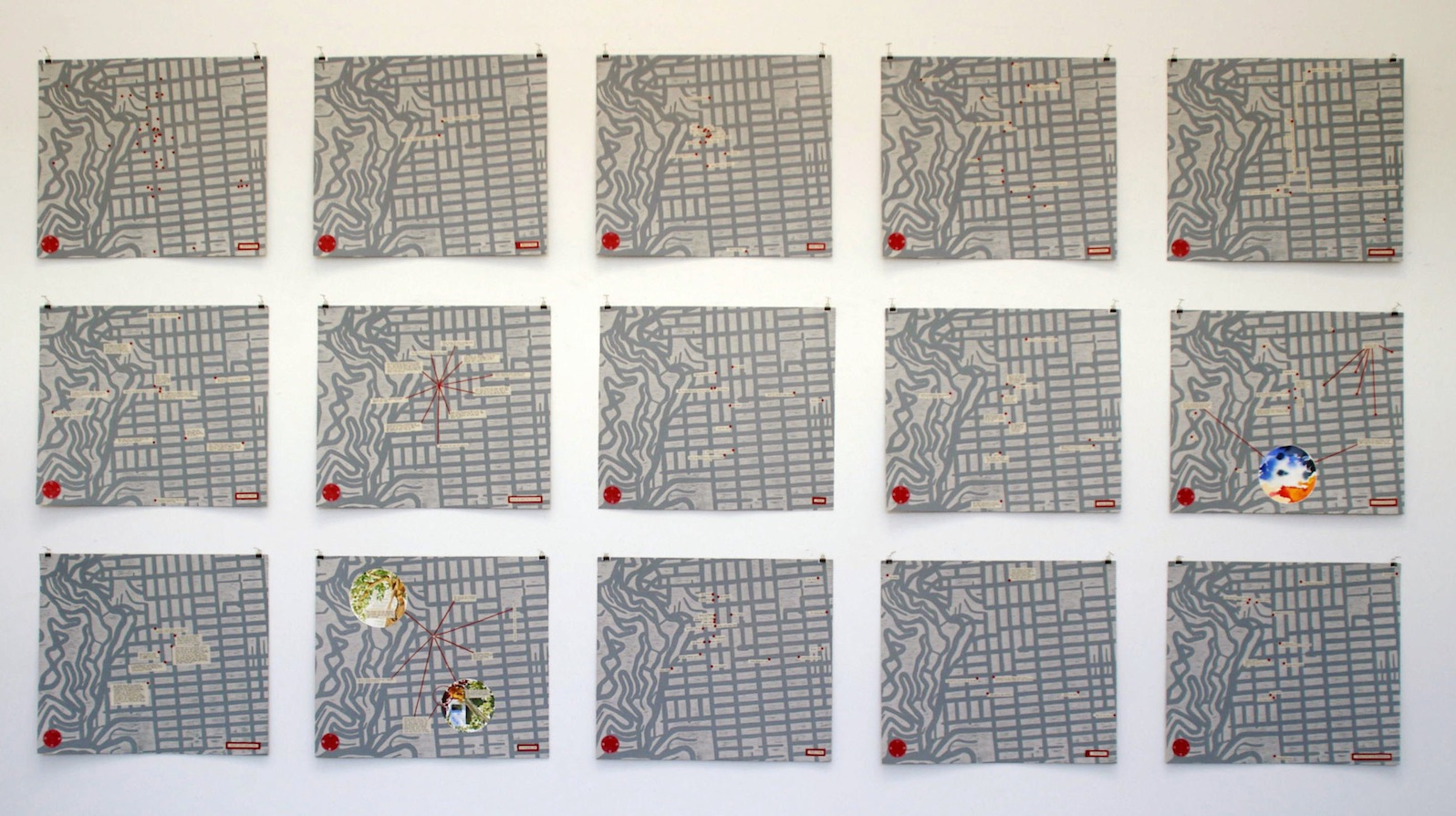 For over a year now I have been living in the childhood home of the man whose generosity provided me with the house I grew up in. Without my mother’s memory for place, I could have lived here ignorant of the history embedded in the building, the trace of all the people who have occupied these walls, and the incredible kismet of having landed where I did. Walking my dog every day, I am also faced with the exterior of my old home, painted a different color now—and surely changed from within as well. The women who live there have owned it for ten years, and their own stories are now layered with mine in the familiar, distorted rooms.
Beginning graduate art school in this climate of estranged familiarity, I found myself obsessing over place and its heavily layered meanings. I made a map of my neighborhood, intending to mark it with stories of people I had known, but quickly ran out of space. I made another map, this time filling it with anecdotes of memories situated in the place. 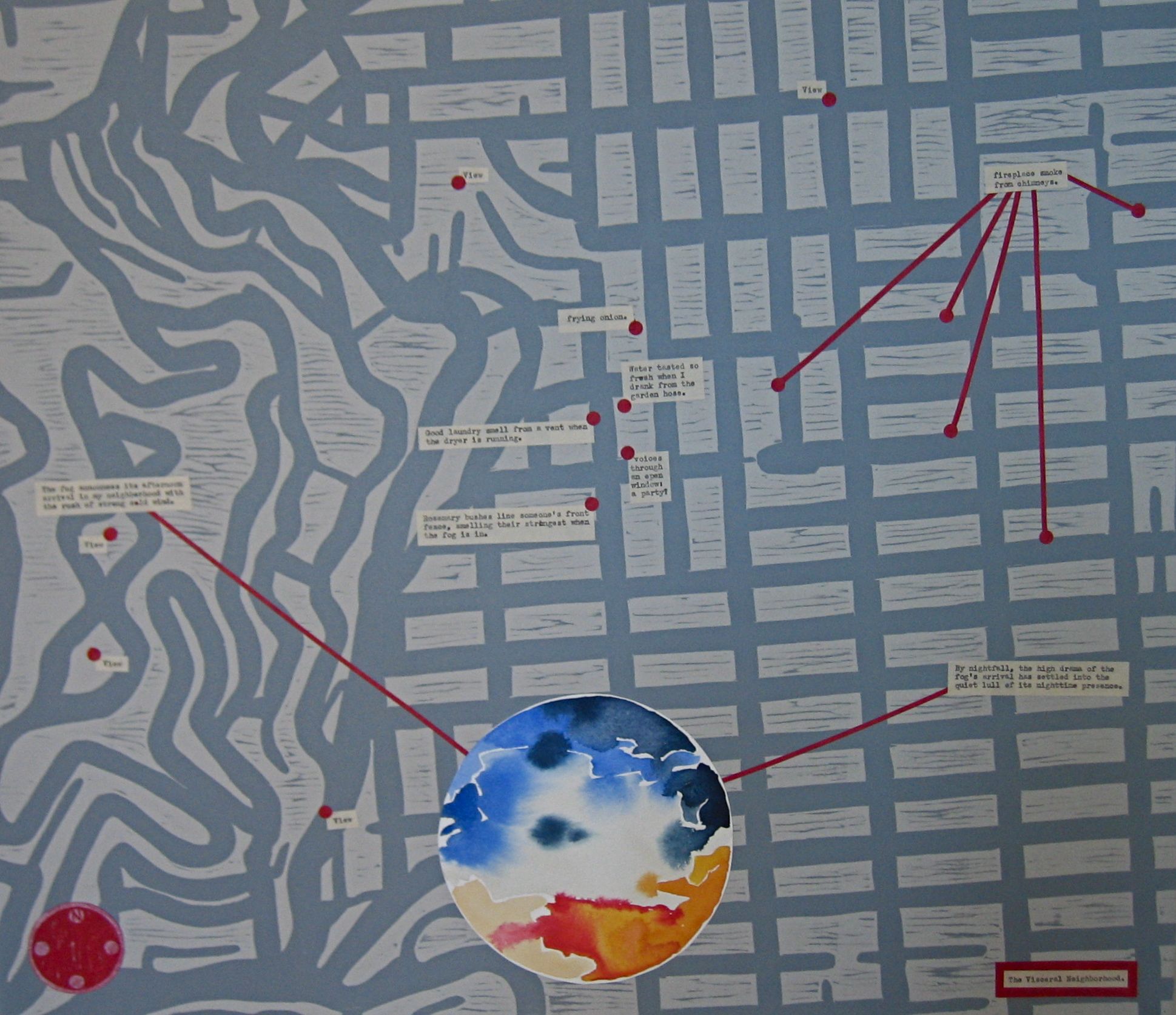 Finding that I was questioning the accuracy of my memories, I mapped “Things I don’t remember right,” followed by places present, changed and gone. “The Visceral Neighborhood" (above) maps maps my emotional landscape.
Fifteen map versions later, I felt nowhere near finished mapping my own experiences. Looking at the depth of my relationship to this corner of the city, the vastness of the project I had undertaken began to become clear. This place, and every place, is both a vessel for and a vital character in the lives lived within it. My experience of the neighborhood had already filled fifteen maps, but it only scratched the surface of a vast social archeology waiting to be uncovered within the blocks surrounding my house.
I began to seek the participation of my neighbors, strangers and friends with whom I share this space. The intersection of my important places with the narratives of other lives lived in the neighborhood reveals an intrinsic connection to people I didn’t think I knew. 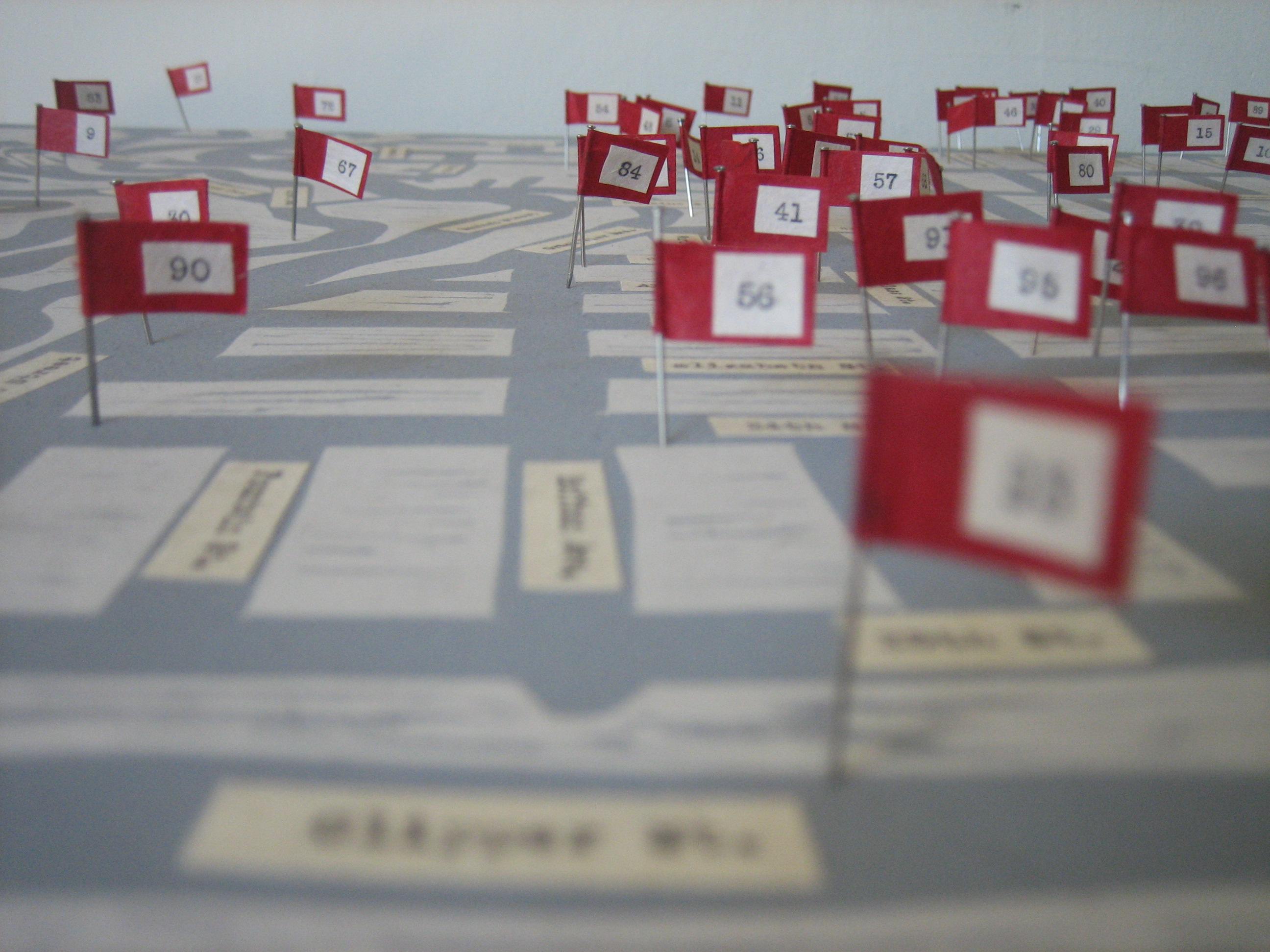 Several people, for example, flagged Twin Peaks on a participatory version of the Noe Valley map. To me, Twin Peaks will always be the site where Zero, Mark’s dog, was hit by a car on a blind curve of road in 1985. To Jack, it is the site of the visceral experience of running down the hill, being hit across the chest by the force of the wind, and witnessing the city open up below and to the right “in topographical real time.” To Natalia, it is the place where she got incredibly lost in her first weeks in the city, only to discover the miraculous view. Someone else marked his first pot-smoking experience there. And to one anonymous participant, Twin Peaks is the site she would visit ritually while going through chemotherapy: “I used to… talk to the clouds, fog, and sometimes the sun. I said, Please let me live.”
As I continue my investigation into the social archeology of my neighborhood this year, I will be the collector of stories, the facilitator of conversations. I will use our shared experience of place as a tool of connection, providing a space for the act of telling our stories while bringing in a wider audience to experience the neighborhood through a multitude of personal lenses. In exchange for adding their stories to my growing archive, my neighbors will receive artwork, segments of a giant woodcut print of a beloved cityscape we will all share. I hope to unearth, on an intensely local scale, some of the narrative interconnections underlying this one corner of a city saturated with stories.

I’ll be sharing the maps as they develop here on Shareable.net, and I’d love to hear about other projects that seek to map the social archeologies of neighborhoods.

Claire Kessler-Bradner was born is San Francisco, CA and still calls the city home. She is a life-long artist who grew up in a print shop, and is currently doing

Claire Kessler-Bradner was born is San Francisco, CA and still calls the city home. She is a life-long artist who grew up in a print shop, and is currently doing graduate work completing her MFA at California College of the Arts. Her art practice examines the intersection where memory and the human landscape come together to define Place. Embracing the materiality of the handmade, she uses the print, the book, text and drawing to explore ideas of memory and its failures, manifestations of home, and the human, social and personal histories that collectively make up her neighborhood.