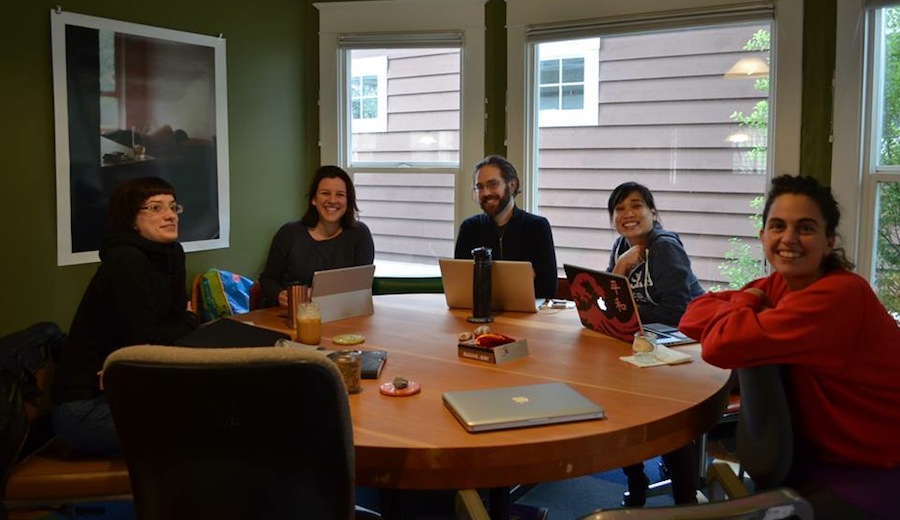 Collective Self is a free, in-home coworking space in Seattle. Created by Lori Kane in 2012, it was inspired by an experience Kane had in San Francisco. While walking to a coworking space for an interview, she walked down a street that was incredibly diverse, with people from all over the world. Once she was in the coworking space, however, the diversity vanished.

“I walked into the building, in through the doors, and up in to this lovely coworking space, and it was a sea of very young, white faces,” Kane says. “I realized that in the Central District, my little neighborhood in Seattle, we could do better.”

When Kane started Collective Self, she figured if you open your doors, and it’s free, that all sorts of people from the neighborhood will walk in. What she found was that it was still mostly white people walking in. Over time, however, the people working in the space grew closer, started meeting more people, and started experiencing the neighborhood as their neighborhood.

After running Collective Self for two years, Kane turned it over to a woman named Nicole, who recently turned it over to the current host, Elyse. While Elyse was learning the ropes, Kane created a book titled Reimagination Station: Creating a Game-Changing In-Home Coworking Space to share her experiences and insights with her. 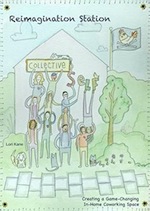 Laid out as 73 hints for running a coworking space at home, Reimagination Station includes advice about getting support from neighbors, protecting your time, and noticing your impact on others. It's not a play-by-play how to, but rather a glimpse into the rewards, challenges, and connections that Kane experienced hosting Collective Self.

The book, which was created flash-style in four weeks, is an invaluable tool for home coworking hosts. It's also a rich resource for anyone who wants to grow the connectedness of neighborhoods, create something beautiful and valuable that isn’t driven by profit, and extend themselves further into their community.

Shareable asked Kane to distill 10 of our favorites hints down to their essence. Here’s what she shared.

2. Watch Life for Deep Words, Community Stories and Little Reminders
We live in an age where we are drowning in information and things to read. The space taught me what I should be paying attention to. It’s community stories. I’ve learned to listen for the word wow.

3. Reimagine Relationship Building and Spreading the Word
I don’t like marketing and I don’t like self-promotion. Having the coworking space allowed me to be able to spread the word about our space and about myself and what I’m doing without doing anything at all that I thought was icky marketing stuff.

It’s literally just holding a space and getting to tell the amazing stories of things that happen in the space over the years. That’s what we do to build relationships with people. We tell the stories of rescuing the four baby squirrels from the attic.

Toward end of my corporate career, I started working with other small groups and we started reimaging our titles into existence. The coworking space took that to a whole other level because it’s more than work that happens in the space. In the space I got to be a home canning guru, or a gardening guru, or a large-scale hopskotch event planner.

It helped me imagine some things for myself that I probably wouldn’t have otherwise. Last year I wrote a book of poetry. Before, I never would have called myself a poet. Since it’s an informal space there’s a lot less risk in reimagining yourself and talking out loud about what you love to do.

5. Don’t Run the Space
I’ve really gotten to practice that one since I moved away. In some ways it’s a non-Western idea—the fact that by just being present you can affect massive change. I just learned to do that, week after week. I [initially] felt responsible for the space and felt responsible for other people’s experience in the space, but learned that people are very capable of handling things. You can say, don’t run the space, or you can say, allow everybody to run the space 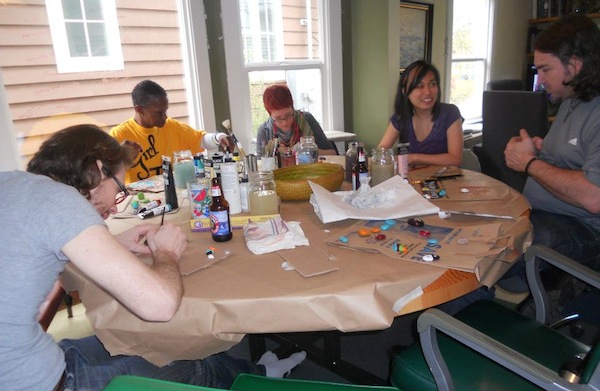 Crafternoon at Collective Self

6. Connect with Other People Learning in the Same Direction, Both Locally and Online
If you’re starting a space, or like the idea of hosting your own space in a home or park, find some other people who are doing the same thing. You’re not looking for experts, you’re looking for people who are where you are or just a few steps ahead of you.

Find them, make friends with them, and learn together. Instead of trying to get yourself so prepared that you know absolutely everything about coworking before you start, just connect with a few folks and go from there.

7. Trust Your A-ha Moment Implicitly
The coworking space helped cement this in me. My first a-ha, I didn’t fully trust. I had to sit there being nervous the first few months while I was in the space, wondering if I could do it. But, two years later, the space had completely changed me. 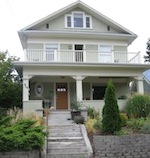 I was taking a University of Washington survey that asked what’s your neighborhood. My neighborhood wasn’t even listed in dropdown options. There was also a point at which the Seattle Collaborative Space Alliance thought we should have dues, that could keep out the spaces that really just wanted the association without any of the work of being part of a community.

I started standing up for my neighborhood. We’re a free space. I know having lived in our neighborhood, that anytime you make money an entry fee, you’re keeping a whole lot of interesting, creative, wonderful people out. The Alliance did end up instituting a small yearly membership fee but grandfathered our space in.

9. Deep Welcome Doesn’t Begin at Your Door, It Begins On the Sidewalk and In the Street
It’s not enough to care from the comfort of your own home—you have to offer your hand to other people on your street.

10. Imagine the Whole Space as One Big Experiment and Small Pilot Ideas
That’s just mostly for people like me, who tend to get uptight about things. The nice thing about being in an in-home space is that it pushes you along. We take ourselves very seriously in a lot of spaces but in an in-home space there’s enough real life mixed in that it tends to naturally dissipate any tendencies to get too extremely serious about our work.

We waffle between working in one room, hanging out in another room, cooking in the kitchen, sitting on the porch and having drinks, and walking down the street and having more drinks. It’s just useful to work in this manner for people who take themselves too seriously, and that includes me.

When asked if she thought this model could be replicated anywhere, Kane relates the story of a single mom in Pakistan who requested a copy of Reimagination Station. The woman liked it so much that she started photocopying pages of it, and giving it to her friends.

“If she can imagine it working in Pakistan,” says Kane, “then it would work in Pakistan.”

Kane is also partnering with Ronald van den Hoff, founder of Seats2meet, to turn two sections of the book into mini-books that provide tips on hosting, and working in, an informal coworking space.

“The fun part about being in the mini-corner of the coworking world that is free coworking,” says Kane, “is that I feel like those people are instantly my friends. If you’re on the planet, and you’re hosting free coworking, say no more. We are instant community.”

Elyse, who currently runs Collective Self, says that the most valuable thing about in-home coworking is its ability to let people show up as they are without a barrier to entry.

"A lot of people don't really understand what coworking is, and might be reticent to give it a try,” she says. “I think it's great to be able to have a space where people can come as they are and participate as they'd like.”