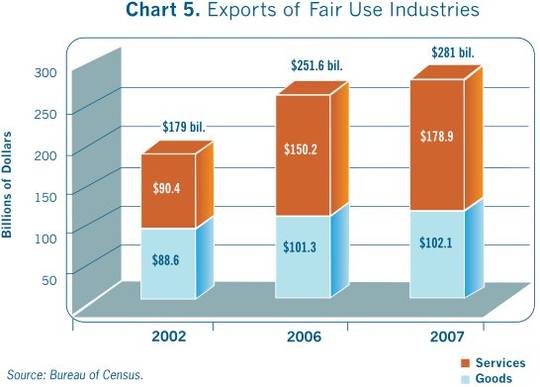 "The IT industry's US lobby group has released a report calculating the size of the 'fair use economy'; in the US — all the businesses that rely on fair use, including web hosting companies, private schools, search engines and many others," writes Cory Doctorow at Boing Boing . "The total for 2007 (the last year for which stats are available) is a whopping $4.7 trillion — one sixth of US GDP — with over 17 million people employed." From the report itself:

Industries benefiting from fair use have grown dramatically within the past 20 years, and their growth has had a profound impact on the U.S. economy. The development and spread of the Internet as a medium for both business and personal use has been creative and transformative. The creation of new businesses (e.g., Google and Amazon) and business activities has in turn fueled demand from other sectors of the U.S. economy (e.g., fiber optics, routers and consumer electronics) and transformed a host of business processes (e.g., communications and procurement).

The advent of the Internet and networking technology also has been widely credited with reviving U.S. productivity growth after two-decades of below-trend productivity. As higher productivity is an important source of income to labor and capital resources, the "new economy" has helped spur overall growth and offset structural declines in other sectors of the economy.