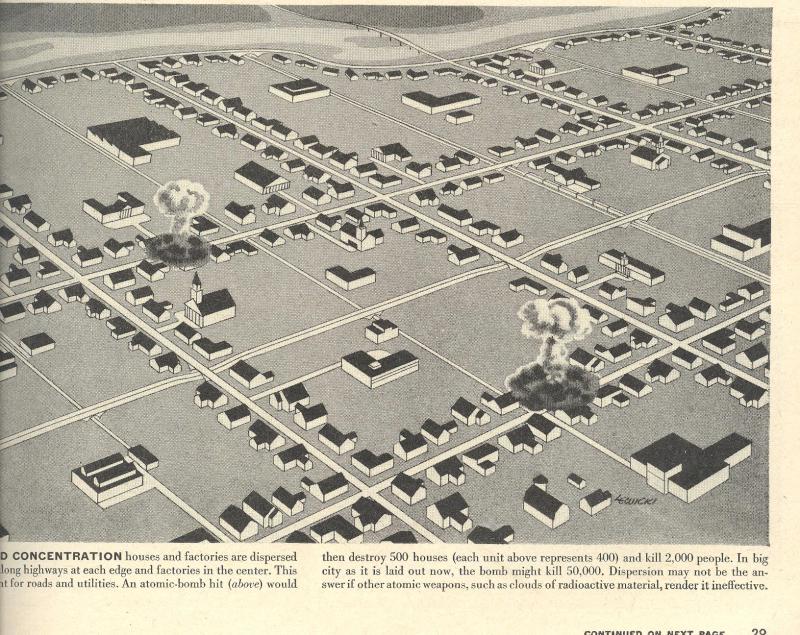 Remember the Cold War? I used to love the idea of a nuclear apocalypse. As a kid in Michigan, my little friends and I battled green-skinned mutants across our town's bombed-out fields and through abandoned factories. Fun!

Today, the relics of the Cold War fascinate me. Take, for example, this idea, recently recalled on the blog Ptak Science Books: To counter the threat of nuclear war, a group of America's best and brightest — probably educated at the same institutions as the bright boys who suggested Vietnam — proposed dissolving American cities and spreading the population and infrastructure over as great a distance as possible. In other words, the entire country would be turned into "a vast nothingness of exurban Atomburbs" so that as few people as possible would be killed by a nuclear attack.

So crazy, it just might work! And this is, of course, pretty much what happened with the creation of the Dwight D. Eisenhower National System of Interstate and Defense Highways in 1956, which accelerated suburban sprawl and opened the door to a new kind of apocalypse: global warming.

Bonus: It's also contributed generously to creating a nation of culturally fragmented, socially isolated, and horizontally challenged Wal-Mart shoppers. In other words, the opposite of a shareable society. (You can read the original proposal in The Bulletin of Atomic Scientists.)

Have we learned? Not really. The threat of nuclear war has receded–but the appeal of doomsday hasn't gone completely the way of the Berlin Wall. Of course, there's no time to worry about boring, real stuff like oil spills in the Gulf of Mexico. Today, we've watched enough movies like Armageddon and Deep Impact to know that the real threat comes in the form of an asteroid strike.

In case this scenario comes to pass, one entrepreneur is courageously making sure people with way too much disposable income will stay safe in the wake of apocalypse. He's selling spaces at $50,000 a pop in a network of underground bunkers.

In this video, the place looks like a frakking Marriott (I'd rather die in the fireball, thanks), but there are some nice crazytown flourishes here: "Nostradamus predicted it! The Mayans predicted it! What if the government knows and we don't?" Have your credit cards ready!

Don't get me wrong: I do appreciate the barracks-shareability of this idea. These bunkers would have to be ultra-efficient and super-sustainable in order to last more than a few weeks. There's a kind of sweet, karmic rectification in these underground Marriotts, in which affluent Americans who battle public transit and solar panels today are forced to live on a fluorescent-lit commune tomorrow. Bring on the asteroid!