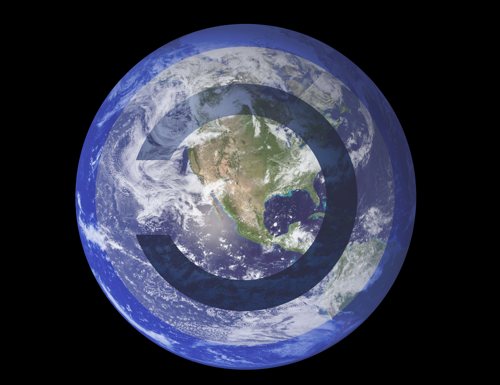 Shareable’s The New Sharing Economy panel at the South by Southwest Interactive festival investigated the social and economic impact of sharing, and the opportunities it provides. Shareable publisher Neal Gorenflo moderated a panel featuring Dori Graff of Itizen, a platform that provides a way for people to attach digital content to physical objects, Punsri Abeywickrema of peer-to-peer object sharing platform Rentalic, Kim Gaskins of Latitude Research, and John Zimmer of carpool and rideshare community Zimride. Below is a rough liveblog from the discussion:

Neal Gorenflo: When I came to Austin for SXSW I had a choice–I could stay at an anonymous anthill hotel, or I could go on service like ArirBnb and rent a unique space from an individual. I’m staying at the Tiny Pink Mansion which is a trailer. The way I got here today is that I borrowed a bicycle from the Eric, the manager of the trailer park. Instead of giving my money to an anonymous hotel, I’m giving it to a single Mom and an artist.

Neal asks for a show of hands–who has used AirBnb? About 15 hands up.

Who has carshared? About 30 hands.

Who is a coworker? About 15 hands.

Who has loaned money to a strange on Kiva or Spending Club? Many hands up 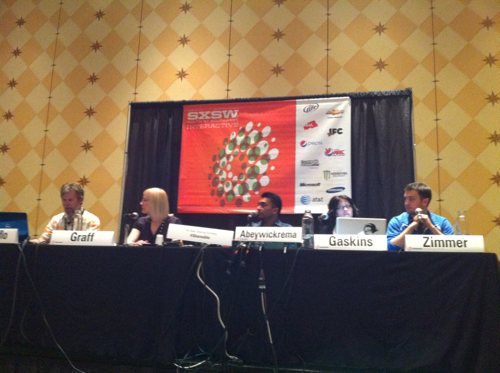 Neal Gorenflo: Location based services, social networks and economic crisis are changing the economy. There’s a boom over the past few years. For the Internet of Things, it’s like 1995. Instead of creating wealth for just a few, we can radically increase access to resources for everyone. I don’t know anything else that could makes us wealthier and greener at the same time. Sharing will become a focal point for the new economy. This trend will help us meet the ultimate design challenge for the decade: reduce atmospheric carbon from 350 PPM and raise 2 billion people out of poverty.

Kim Gaskins on basics of the New Sharing Economy study: The Internet has contributed to scaling of these services. We can make transparent what assets we have. When you break down the barrier for sharing, you’re more likely to share other things.

Neal Gorenflo: “Car sharing is like the gateway drug to sharing.”

How big are the opportunities surrounding sharing?

Punsri Abeywickrema: Rentalic is like a Netfix for everything. Think about all the belongings you have. An eBay study shows average household has $3000 of stuff collecting dust. Global secondary market is $500 billion market. VC’s we talk to say there is much opportunity for explosive growth in this industry. 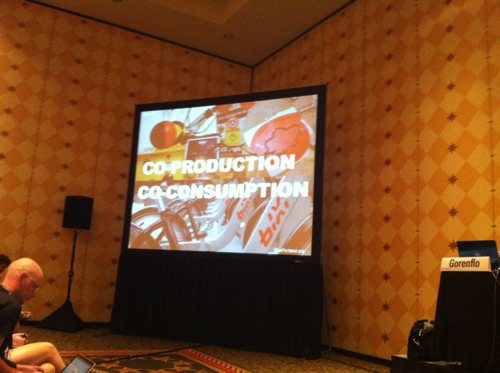 John Zimmer: How many of you would share a ride that was a Craigslist listing with an anonymous email? No hands.
How many would share a ride if you could see a picture and feedback on this person? Many more hands.
Zimride using social graph that Facebook is using so people can establish trust online.
Over a billion trips every day in the U.S.. Dori Graff: 3 trillion miles traveled in US in a year. We’re working on transaction engine so that you can capitalize on miles traveled.
We did a pilot for Price-Waterhouse Coopers, the basic idea is ‘how can we help our employees interact more?’

Your car is the second highest expense in the U.S. By splitting gas costs, you can save thousands of dollars a year.

We’ve had great testimonials that it’s really fun to meet other people and share a ride–We even had two individuals fall in love on the way to a Jack Johnson concert.

How could we be interacting with our objects?

Dori Graff: We want the music on the CD, not the CD itself. Ownership is something of a burden. The way we think about status is changing–what things represent as to who you are as an individual. An inexpensive car represents something different now than it did in the past. In past, it’s been easier to buy something, but now sharing is considered savvy and smart.

Neal Gorenflo: You can go carfree with an iPhone. You can get around a lot better and have more freedom than dealing with a car.

How do you address the issue of trust?

Punsri Abeywickrema: Now that social networking is stable enough, the web enables trust between strangers. With social networks you can identify the people near you and allow you to get connected in your physical community.

John Zimmer: Humans innately want to be in a community. For a while technology separated us, but the now that innate human trend of wanting to be part of a community is being replicated with the social graph. Now that can be brought into the physical space.

Kim Gaskins: Technology creates the constraints for building trust. It allows people to give a rating. We found in the study that sharing online made them more open to sharing offline.

Neal Gorenflo: The social web has been a training ground for sharing offline. 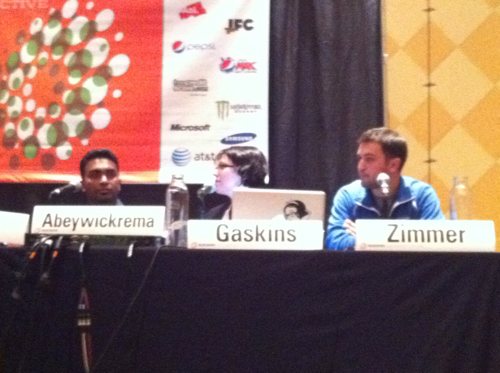 Neal Gorenflo: How is this trend connected to other things we see going on in the world? What’s going on in Wisconsin, Egypt?

John Zimmer: Information flows a lot easier now. Technology’s allowing us to communicate when we have an open car seat, and for social media to serve as a town square.

Punsri Abeywickrema: We are moving towards a service-oriented community. This is the next layer of this

What role do cities play in this?

Kim Gaskins: There is an opportunity for cities to provide open data so people can make decisions to use things like public transit or bikesharing. To have a more sustainable city, people need real-time data. Cities provide choice by providing information access to citizens.

Thoughts on the future?

Dori Graff: There is huge opportunity out there–go get it.

Neal Gorenflo: 90% of things are idle 90% of the time. There are a vast amount of idle assets. Instead of buying new stuff you can use what’s right here.

Bruce Sterling: Are you seeing industrial designers moving into the shareable space, designing objects to be shareable?

Dori Graff: There are a number of car manufactures who are coming out with cars specifically for carsharing. They come equipped with all the security equipment you need. Planeed obsolescence built into things is changing–consumers expect things to last longer.

How do we graft this on to an older generation who doesn’t share as eagerly?

Dori Graff: The Baby Boomers are going through lifestyle change and downsizing. My parents originally took all their stuff and put it into storage, but after a few years they didn’t want to keep these things.

Dori Graff: My dream library would have more than just books–communities come together to supply other things. The library system makes so much sense. How many lawnmowers or ladders do you need in a neighborhood?