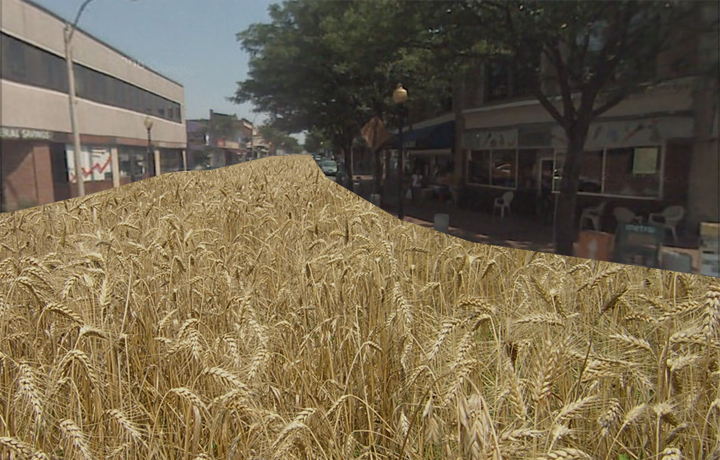 “Besides the destruction of the Universe in late 2012, the 2010s see a great many changes in Somerville. Many families move out of town, due to the poor quality of city’s schools. The vacuum this creates is filled with more and more young people, who bring with them a different set of interests…This shift in demographics causes the city to sell the Powder House School to developers in 2010, and to provide even less funding for schools. This, in turn, causes more families to move out.”
-“The History of Somerville, 2010-2100,” p.5

Welcome to the one of the possible futures of Somerville.

Somerville, Massachusetts is a city of apartment buildings, multifamily homes, and very few parks. It’s a densely populated city with almost 80,000 people living in just 4 square miles. Somerville shares a border with Boston and Cambridge, and while it has a number of bus routes, it has only one subway stop.

This subway stop changed the fabric of the city. When the station opened in Davis Square in 1984, Somerville was a mostly blue-collar city. Davis Square itself was home to a number of markets, shops and bars, and sat near a park that had only recently stopped being known for its drug users.

Fast-forward 25 years to 2009. Davis Square is now one of the highest-rent districts this side of the Charles River, and is home to coffee shops, upscale restaurants, and a few boutiques. Most of its residents don’t remember the station opening, for the simple reason that they either hadn’t been born yet, or hadn’t lived anywhere near Somerville in 1984.

Another subway extension on the other side of town is slated for construction in a couple years. This time, the transit system will bring not one, but a half dozen new stops to town. What changes will this new extension bring to Somerville?

In February 2009, I began asking current and former residents what they thought the rest of the century might be like. To help make things a little more concrete, I asked them to state what year they thought their predictions might take place in, and encouraged them to think as specifically about Somerville as they could. I told everyone that these predictions could take the form of realistic suggestions, pie-in-the-sky daydreams, or pessimistic views.

I added all of these ideas to a timeline of Somerville’s future, and also included official governmental plans, think tank statements, and some futurist scenarios. I called the project “The history of Somerville, 2010-2100.” It was meant to get people thinking and talking about the future—and as a document of these thoughts. I also secretly hoped it might make people realize that they really do have a say in their future.

I originally intended to end the project sometime in 2009, but the more I worked on it, the more other people got involved—and the more I enjoyed it. When I tried to shut it down in December 2009, I was surprised to find that people kept writing me emails. So I kept working on it until the end of 2010. As the project grew, people seemed to decide that they could use it as a platform to share their concerns and suggestions with a wider audience.

In the past two years, I’ve learned quite a lot about my neighbors. A number of people expressed concern about the expansion of the subway, and the gentrification which might come with it. Others worried about the city’s increased car traffic, and whether the new subway would actually be built at all. One woman told me about her problems finding a good public school in town for her kids—and her search for an apartment in a different town. An amateur baker told me how hard it was to find a store to carry his pastries, and how he wished someone should open a cooperative store for people like him. Others talked about renewable energy, the city’s financial health, more public space, and rising flood waters.

I also learned how interested my fellow Somervillians are in what their neighbors think. At every event I had for the project, and at every street table session, people would pour through the timelines I’d brought along, and discuss the predictions they looked at.

And regular folks weren’t the only ones interested. An urban planner who worked for the city asked to meet me for coffee, to discuss the material I’d collected. Architects and designers got in touch to tell me how good they thought some of the ideas were (and how others just weren’t feasible). The local library asked me to give a talk. And a number of politicians wrote to say that they’d read the free PDF I put out; one even hinted that she’d like to become involved in the project.

But Somervillians weren’t the only ones who seemed interested. Some of the people I spoke to had never lived in Somerville—but they still wanted to know about the ideas I’d collected. Many of them told me they wished they had a venue to talk about the future of their own towns.

I think that’d be nice, too.

To read the ideas I collected between February 2009 and December 2010, visit the project’s website, here.

Tim Devin is a Boston artist who's interested in community, public space, making books, and giving things away for free. He's a member of the Rise Industries art group, and

Tim Devin is a Boston artist who's interested in community, public space, making books, and giving things away for free. He's a member of the Rise Industries art group, and hopes you're well.

Things I share: Books I've made; books I haven't made; food; funny stories.