The Fab City: It's More Than Just a City Full of Fab Labs - Shareable
Skip to content 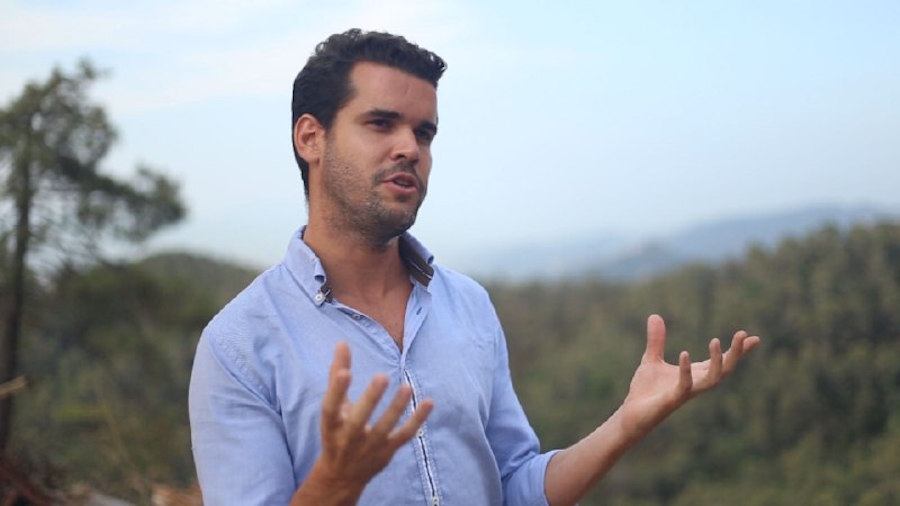 OuiShare|February 6, 2017March 4, 2019
The Fab City, a locally self-sufficient and globally connected city, invites us to explore how digital manufacturing could relocate food, energy and industrial production in an urban setting. It was the central subject of  an evening organized by OuiShare on November 10 as part of the Disruptive Innovation Festival and our exploration of the future of cities. In an interview, founder of the IAAC, Fab Lab Barcelona and instigator of the Fab City program, Tomás Díez, tells us more about this project and their visions for the future.
Benjamin Tincq: Hi Thomas. Can you give us a brief introduction and tell us how you ended up launching the Fab City cities project in Barcelona?
Tomas Diez: I am an urbanist and technologist from Venezuela. I moved to Barcelona 10 years ago to work at the Institute for Advanced Architecture of Catalonia (IAAC). They were setting up a fab lab at the time and I took charge of it. It was the perfect way to combine my previous education with my interest in cities and distributed production. It also taught me that if we want to change cities, we need to look beyond the design point of view and consider the dynamics at play. It’s not just about putting sidewalks or trees here or there, but thinking about the fundamental dynamics that could transform the way people live in an urban space.
So, Fab Cities are basically a combination of digital manufacturing, sustainable and smart cities, and circular economy. Is that right?
Yes, one could say so, but remember that digital production is more than just 3d printing! The Fab lab is really a base for a larger vision to digitize and relocate fabrication. It’s a playground for experimentation where we can prototype new distribution models and reinvent the relationship between consumption and production. We are mainly researching fabrication models that allow people to make their own things closer to home, instead of buying everything from China.
Fab Labs are not about technology however, they are about the culture around technology. And they are spreading fast. Today there are over one thousand fab labs across the world, that together function as a distributed production system on a small scale. I can design something in Barcelona, and without using fossil fuel, create the identical product in Cape Town, Wellington or Tokyo.

"Fab labs are the cultural agents that will help transform the industrial and fabrication industry."

Our approach is closely linked to the notion of circular economy, in the sense that we aim shorten and localize production loops. With the right infrastructure and knowledge we could reduce the amount of material that a city imports and rescale globalization. It also allows companies to create social value and not only profit.
Can you day a few words on the Fab City project that was initiated in Barcelona?
In 2011 we had the opportunity to take our ideas to a more the political level. We proposed the Fab city project, which challenges cities and regions to start building the infrastructure to be locally productive and globally connected by 2054. In 2014 the city of Barcelona opened the first public Fab Lab. The aim was to inspire other political leaders by offering an example.
This year we were joined by Amsterdam, Paris, Santiago de Chile, Detroit and even the kingdom of Bhutan. In total the challenge now gathers 12 cities, 2 regions, 2 states and 2 countries. Of course, being part of the fab city initiative does not mean you will become one tomorrow. It’s about establishing a roadmap for cities that want to collaborate on building productive and resilient cities and empower citizens through technology. 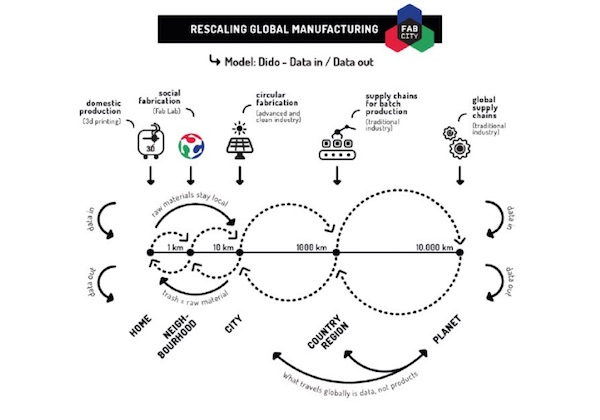 What are the most interesting projects emerging from the Fab City Challenge?
We don’t have a flagship project yet, but several are beginning to look quite promising. Products such as the shower loop, an idea initially developed during POC21, are being developed. They could become part of the fab city ecosystem, contributing to a new mindset and relationship between people and products.
Another example is the Poblenou neighborhood, which was recently announced as Barcelona’s “Maker District” by the city council. With their support and in collaboration with Ikea, this neighborhood was turned into a 1,5km2 Fab City prototype. We mapped existing businesses and institutions that align with the Fab City vision, from fab labs and makerspaces to restaurants that serve local produce. Soon to come is also Poblenou’s “Super Fab Lab”, which will connect all the individual initiatives of this little productive ecosystem.

"A fab city is not a city full of fab labs. It’s ecosystem that is varied, coherent and connected"

Paris and Toulouse are joining the Fab City Network. How do you see them contributing to the network with their specificities?
We have been working on a type of charter that lists the minimum actions required for a city to join the network. Examples are sharing data with the rest of the network, supporting local teams that are contributing to our vision, like Ouishare in Paris or Artilect in Toulouse, and participating in our activities like the annual Fab Cities Summit.
The network is meant to spread good practices to cities, but also we hope to see each city develop their own roadmap. We expect the next Fab City Summit in Paris 2018 to show some concrete results that can help us clarify the entire network’s vision and establish a trajectory for the next 10 years.
What do you see the impact being on companies in terms of their business models and supply chain? What is their role in this urban and industrial transformation?
Many large companies today rely on closed off and controlled access to production means and information as their main source of wealth and growth. So, naturally the concept of redistributing access disrupts this business model and poses a threat to several people’s interests.
Today the business model of companies like Ikea and that of Opendesk, a platform with local open source furniture, are vastly different. However, I could imagine OpenDesk-like models being replicated by the latter in 5 or 10 years. We have been working together with Ikea to explore potential scenarios like this. Today people buy unassembled furniture in a warehouse outside the city and bring it home to put it together with instructions. Soon people could design their own furniture on demand in micro factories that are located in city centres. This would not only avoid storage costs but allow for personalized and customized furniture.
Other larger enterprises interested in bringing production closer to consumption for example are Adidas, Nike, Airbus or Saint Gobain. They are especially interested in the culture around the technology as well as ideas on open society, open innovation, distributed networks and blockchain. 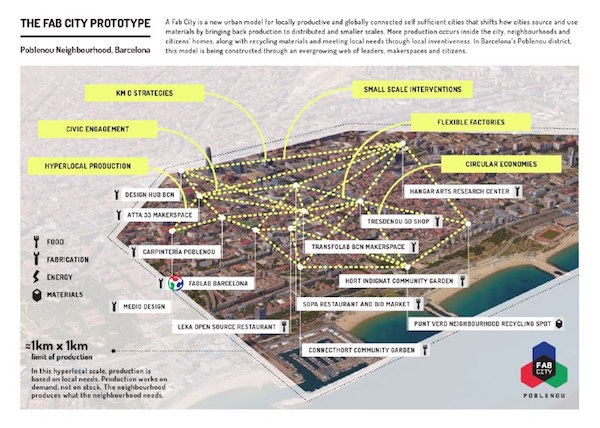 I see a convergence with another big trend, the evolution of work as something more independent, platform economies and automatization through digital technologies.
Absolutely. Many people nowadays don’t want to work as full-time employees anymore. I like to connect it with the Zygmunt Bauman concept of “liquid society”: Time, work, family, love… all the structures that we considered to be fixed and to which we hold on to are becoming more and more liquid and fluctuating.
Being able to adapt to these changes means building more resilient organizations and networks. The Fab city could in a way be considered the productive organ for this liquid life.
Story by Benjamin Tincq, edited by Bianca Pick.
This article was originally published by OuiShare in their magazine. Hungry to know more about the future of cities? Check out their upcoming festival ‘Cities of the World, Unite!

OuiShare is a global community and think and do-tank. Our mission is to build and nurture a collaborative society by connecting people, organizations and ideas around fairness, openness and trust.We believe

OuiShare is a global community and think and do-tank. Our mission is to build and nurture a collaborative society by connecting people, organizations and ideas around fairness, openness and trust.

We believe that economic, political and social systems based on these values can solve many of the complex challenges the world faces, and enable everyone to access to the resources and opportunities they need to thrive.

OuiShare activities consist of building community, producing knowledge and incubating projects around the topics of communities and the collaborative economy, as well as offering support to individuals and organizations through professional services and education.

Started in January 2012 in Paris, OuiShare is now an international leader in the collaborative economy field. A non-profit organization which has rapidly evolved from a handful of enthusiasts to a global movement in 25 countries in Europe, Latin America and the Middle East, our network of 50 expert “Connectors" engage over 2000 members and contributors worldwide.