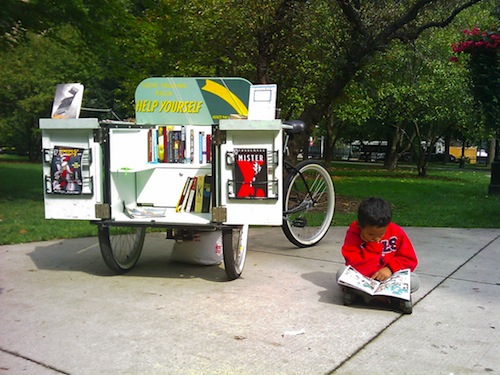 You're likely familiar with the venerable Bookmobile, but when is the last time you saw one in your neighborhood? In many communities, it's a rare sight. Beset by budget cutbacks, library outreach is increasingly rare, leaving it to citizens to pick up the slack and encourage reading in their communities.

Gabriel Levinson is one such citizen. Since 2008, he has rode his custom-built Book Bike into public parks across Chicago every weekend, weather permitting. Heading from park to park, Levinson distributes books donated by publishers to anyone interested.

Inspired by the literary activism efforts of Dave Eggers' 826 organization, Levinson set out in 2008 to merge his "two passions, cycling and reading. It seemed natural to me–just as the right to read provides limitless potential for a person, a bike allows you to go just about anywhere. Being on a bike is freedom to me." 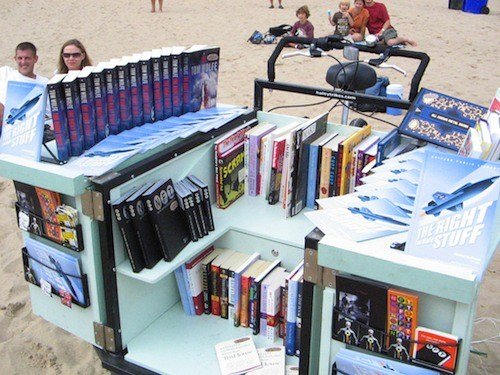 "Free" is baked into the Book Bike's mission statement: Levinson only appears at public parks and free events, ensuring that there is no barrier to entry. As he explains, "the mission is to build and cherish a private library regardless of class or economic state, which is why the Book Bike is only at public parks. It's a place where every single person, whether you have a roof over your head or don't, has the right and privilege to be."

"I believe that one of the greatest gifts of being alive, of being human, is that of literacy. If you can read, your world suddenly becomes wide open, all knowledge is at your fingertips and there is no telling where that can lead someone in life. 'Teach a man to fish' is such a tired maxim. Why can't the common phrase be 'teach a person to read'?"

Levinson has two goals: to create more readers and more consumers for beleaguered publishers. "The idea is that I'll put a book in your hand," he says. "Maybe you'll want to buy a book next time around. My hope has been, in addition to that, people will be inspired to go buy more books."

The bike is a clever piece of engineering custom-built for Levinson by Stephen Horcha of Haley Trikes. "I was going to buy a used ice cream bike," says Levinson. "I couldn't find one, and new ones were too expensive. I came across Haley Trikes, and Stephen and I worked to design the Book Bike." A custom-built tricycle, the Book Bike's front compartment opens up into a mobile library that can hold as many as 300 books. 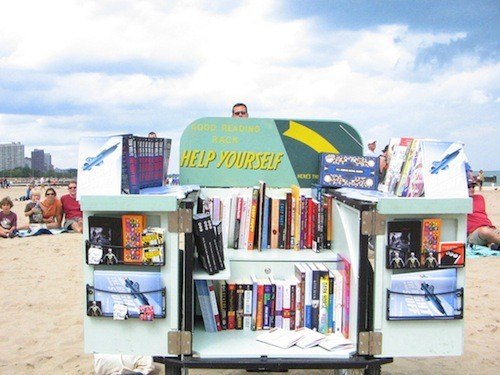 In the past two years, Levinson has distributed over 3000 books. In that time, he has collected countless heartening tales of interacting with readers both old and young.

"One time I was at Garfield Park, these kids came up and I had tons of books. This one kid asked 'how many can I take?' I said, 'Well, are you going to read everything that you take?' He said, 'Yeah!' So I told him to take whatever he wanted, he ended up walking home with a dozen books of all kinds. He went away saying 'Thanks, thanks, I promise I'm going to read all of them!' I don't care what happens after that, to me, that was validation that the whole project is worth it."

Despite the success, Levinson is looking for ways the project can better fulfill its mandate, and serve both his own community and the literary community. In previous years, Levinson has accepted book donations from major publishing houses, but this year he is focusing on distributing only zines and books by independent publishers.

And, congruent with his mission to create not only readers, but also customers of literature, he will be accepting monetary donations for the first time. The funds will be used to compensate independent publishers for books and zines distributed through the Book Bike, and upkeep on the bike itself.

"I had to figure out a way to keep the Book Bike stocked, and financially support independent press and publishers," he said. "I've never accepted money before. I didn't want money to muck things up, but I feel that I've established myself with this project, so I'm confident to take it to this next level."

Levinson is one practioner of literary activism, but he's far from the only one. Another notable literary activist is Luis Soriano, the man behind the Biblioburro project. Soriano loads his library on the back of two donkeys and delivers books to impoverished rural communities in Colombia. As described in a New York Times article about Soriano, the teacher is directly fostering bibliophilia in communities with low literacy rates. 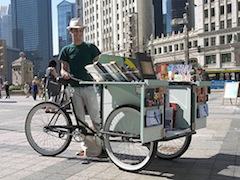 Levinson and Soriano stand as evidence that bibliophiles do not need to be connected to an organization to perform community outreach. While such organizations exist, and are in need of volunteers–the 826 project, Sit Stay Read, and Rock for Reading are three notable examples–Levinson has preferred to remain an agile one-man operation. "I pursued making this a not-for-profit, and found that it was impeding the growth of the project. I was spending so much time figuring out what it takes that I literally stalled the project for months. I want to focus on the people, on the books."

Perhaps most central to Levinson's project is that he is not only enabling readers, but enjoying himself in the process, engaging with literature and his community in a way that not enough people do. He encourages others to follow the lead of efforts such as Soriano's and his own, emphasizing that the experience can be its own reward.

"The goal is to hit as many parks as possible, and as many communities, well to do and not well to do, so nobody is excluded. " he says. "I ride a bike to a park, hang out on my day off, I crack open a book and just chill. I dont take it for granted that I can do this; on the contrary, I do everything I can to make the most of it. What a wonderful way to spend the day."