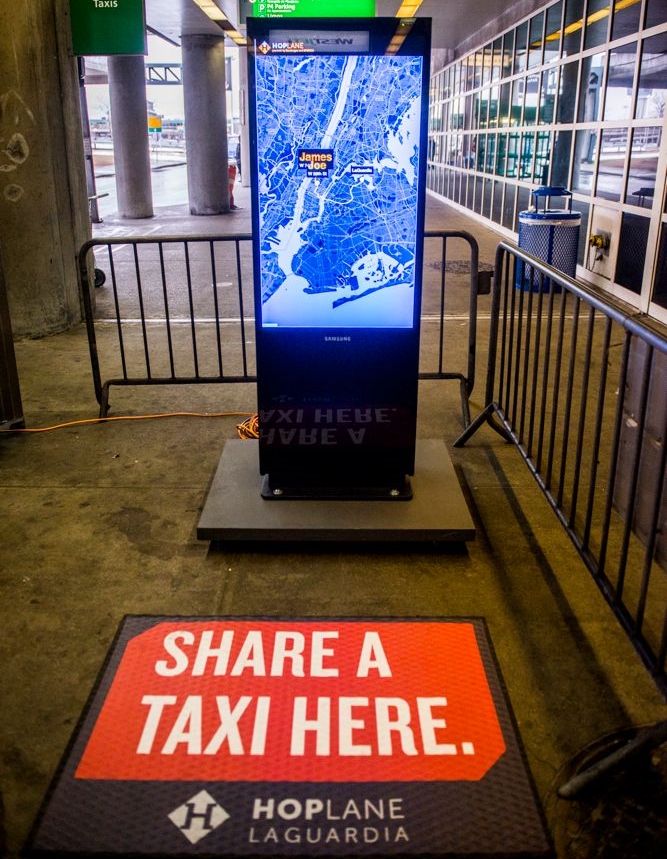 With a palpable enthusiasm for collaboration, David Mahfouda is plotting a new future for taxi transportation in New York City—one that’s more cost-effective, efficient, and sociable. Bandwagon, Mahfouda’s new ridesharing service launched at LaGuardia Airport in July, fills idle capacity in taxis by getting passengers who have complementary destinations into the same cab. The above picture is of Bandwagon's taxi sharing stand with digital ride board at LaGuardia. Drivers make a better fare, passengers pay less for the same distance they would travel alone, and the idea, if it catches on, will likely amount to enormous environmental advantages over time.

Mahfouda first discovered the power of collaboration in high school while playing lacrosse for an eccentric, yet highly effective, coach whose key strategy was to develop strong relationships between players. “He actually got high school boys to shout Shakti (which is Sanskrit for the underlying energy that connects all things) when we came into a huddle,” says Mahfouda. “It was an amazing experience. We won back-to-back championships focusing on Skakti.” This, along with Mahfouda’s strong family ties, influenced his current mission to explore “what’s possible when people work together.”

Mahfouda is now facilitating a major collaboration among passengers, taxi drivers, the NYC Taxi & Limousine Commission (TLC), and other city agencies. Last week I had a chance to ask Mahfouda a few questions about what inspired him to launch Bandwagon, how its first users are responding to the service, and the challenges and surprises he’s encountered during Bandwagon’s Beta phase. Read on for my interview of Mahfouda.

What inspired you to start Bandwagon?

When I was studying architecture and design, I became fascinated with cities, a paradigm of collaboration, and read a lot of Christopher Alexander, the folk architect who focuses on how people used to build and rebuild an environment. One of his driving design tenets is repair. When you empower people to have design authority, they can create really beautiful, intricate, and sensitive spaces over time through revision.

Bandwagon emerged partly out of that ethic: Rather than create an entirely new taxi system, we could simply make the existing system more efficient and more social. The service also provides an answer to questions of space and mobility, which are inextricably intertwined in the U.S. If we can make the car more social, my hope is that we can make our public spaces and cities more social as well.

Can you walk me through a typical user experience?

There are two typical user experiences. The service is slightly different for someone leaving the airport versus someone headed there.

Using Bandwagon to leave the airport, you would first need to get into a taxi line called the HOP lane, or high-occupancy passenger lane, which gives priority to people who are willing to reduce wait times for everyone else by sharing their ride. If you didn’t already have the Bandwagon app, you would download it and register your destination address, or, if you didn’t have a smartphone, you would give your destination address to the line manager.

We have a board near the HOP lane where passengers can see every destination registered in the Bandwagon system. When we find you a match—someone with a complementary destination—your name will appear next to the other passenger’s name on the board. We also send an alert to your phone saying, “Jessica, we’ve found you a match. You can hop up the HOP lane.” At that point you would move to the front of the line where you would meet the other passenger and get into a taxi together.

Right now faring is very informal—you split the fare as you would with a friend, the first passenger paying cash to the passenger who closes the tab with credit—but we’re working with the TLC to formalize the faring process. That way each passenger will be able to pay the driver directly for his or her portion of the ride. This improvement will be great for taxi drivers too, because the individual fares will be slightly higher than half. We think the drivers should be rewarded for reducing wait times for passengers and doing something good for the city and environment.

The customer experience from the city to the airport is really straightforward. All you do to book a trip on Bandwagon is enter your itinerary and preferred pickup time via our website or mobile app, and we take care of the rest. If we have a match for you at the time of your booking, we tell you your expected pickup time, give or take 15 to 20 minutes to accommodate other passengers. If we don’t have a match for you, we book your ride anyway, and you receive a discount on your fare for your willingness to share. If someone joins your ride, we follow up, but if not, your ride is still booked either way. You get picked up as you normally would for a trip to the airport, except that there might already be a passenger in the vehicle or you might have to pick one up on the way. It’s that simple.

How are your first users reacting to the service?

People really like the service. We’ve followed up with all of our users, and last time I did the numbers, 61% either used the service again or reported that they would recommend it to friends if they hadn’t done so already.

What sets Bandwagon apart from other ride-share services, such as Lyft and Sidecar?

I love Lyft and Sidecar, they’re both great companies. What they do is deputize people with cars to be taxi drivers. And while I think there’s a need for their services, the more important and forward-thinking question to me is about how to use our existing physical resources and systems more effectively. In order to do that on the road, you need to use vehicles at capacity. That’s what we’re doing. We’re working with the industry to put multiple passengers in legal taxi and car services. It not only brings the price of these services down, but also increases the availability of these services. Plus, it’s better for the environment. Instead of putting additional taxi drivers on the road, we’re allowing existing resources to be more effective at serving the city.

I’m not from New York, but as far as I understand it, the New York taxi system is highly regulated. How were you able to work into that system as a startup, especially given that so many other ride-share services have failed to do so?

We launched the service at LaGuardia Airport because we’re using Bandwagon to facilitate an existing sharing program of the TLC. They created shared taxi and limousine rates from LaGuardia to various parts of the city, but they didn’t build infrastructure to facilitate passenger matching. So we came to TLC with a product that would basically facilitate the policy they were already pursuing. As a result, we’ve been able to align ourselves with the industry.

We’ve also received a lot of support from New York State and from the New York State Energy Research and Development Authority (NYSERDA). Working with NYSERDA has also facilitated our work with other city agencies.

The other good thing is that we’re not really in conflict with anyone. When we put multiple passengers in car services, drivers make more money and passengers spend less money. With Bandwagon we’re opening up the market to more people, and, in doing so, we’re making the system more efficient. We’ve made a conscious effort to bring all the parties together around this new practice because we think it will be beneficial for everybody.

What has been your greatest challenge?

Everything has been a challenge. The logistical problem is similar to the political problem, which is similar to both the business problem and the financial problem. Everything is related. We have to try to get all the stakeholders on the same page and all the passengers where they want to go on time. On top of that, we’re trying to educate people about a new behavior. And while that’s challenging, it’s so valuable. Once people try taxi sharing, they really like it.

What has been your biggest surprise?

There have been many surprises, but the passenger incentive was definitely a big one. We came up with the HOP lane by literally handing out money in front of Penn Station. We would wait at the front of the taxi line and tell passengers, “I’ll give you a dollar if you wait for a minute instead of getting into this next taxi.” Nobody would do it. Then we tried five dollars, and nobody would do it. No one would even do it for twenty dollars. The extent to which people value their time while waiting in line is incredible. All you want to do is get to the front of the line. We had to figure out how to get that to work in our favor.

Usually, when people think of taxi sharing, they assume that they will have to wait longer. We even imagined people would wait around to figure out a ride share. But flipping that around and making sharing the incentive for passengers to move to the front of the line was both necessary and surprisingly effective for motivating people to try the new behavior.

Another surprise has been how much people enjoy sharing rides. We were concerned at first about what it would be like for passengers to share the backseat. But it definitely makes the ride better.

Do you play up the environmental advantages of ride sharing in your marketing? Or is it really all about convenience and sharing?

The environmental advantages are very important to us, but we haven’t pushed hard on that angle yet. We know that people like saving time. And people definitely like saving energy, but that hasn’t been our top-line messaging.

Does taxi sharing reduce emissions? Have you crunched the numbers?

We just put together a grant for NYSERDA about what the implications would be for fuel and carbon emissions over the next ten years, and the savings are really significant. During that time, HOP lanes would decrease the number of taxis arriving, leaving, and waiting at LaGuardia, and savings would include:

What’s next for Bandwagon?

We’re working to expand within New York. We want to make the service more available by offering additional destinations to more people. We’re also in conversation with transportation hubs throughout the U.S. about bringing Bandwagon to other cities.

Just that the project is incredibly fun. I love it.